Can 2 satellites equal in weight traveling on the same orbital path in the opposite directions intersect and propel each other to gain altitude in orbit?

Can orbital perturbation be negated during intersection by alternating the magnetic fields to preset the 2 satellite's alignment to intersect the next pass?

Alternative or in conjunction: After the acceleration on the 1st pass the object and OMA then meet on the opposite side of the Earth on the 2nd pass to decelerate to reestablish orbit at a higher altitude?

How presise could 2 satellites "thread the needle" in orbit?

Which orbit around Earth has the least perturbation? ANSWERED

How would propagation differ between a GEO and a Retrograde GEO? 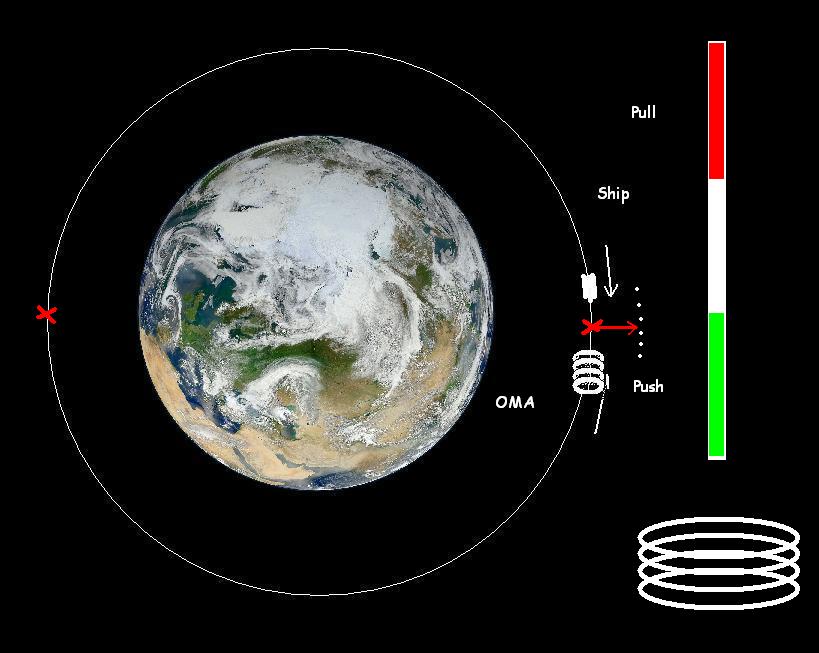 In theory, yes, if the accelerator and the spacecraft are of the same mass, they'll gain the same amount of velocity when they pass, and so they'll meet at a higher altitude on the opposite side. If they aren't the same mass, then the lighter one gains more speed than the heavier, and they won't meet up again.

In practice, I don't think it's workable. The accelerator and the spacecraft will be affected by the usual sources of orbital perturbation (atmosphere, solar wind, Earth's irregular mass distribution, the gravity of other bodies) to slightly different degrees, so you need some active course correction to meet up properly on each pass. Your closing speed is over 15 km/s, so you will need to adjust trajectory on the approach extremely rapidly, and doing so will expend mass on the spacecraft.

Although I love the idea, this will not be practical for at least 2 reasons:

Not the answer you're looking for? Browse other questions tagged orbital-mechanics artificial-satellite propulsion solar-power magnetic-field or ask your own question.

6
Orbital Railgun for launching deep space probes
5
How much G force is applied when correcting an orbit around Earth?
3
How are old satellites removed from orbit?
3
If I were to make an orbit-capable space gun, what legal issues could I expect to encounter?
2
Parallel orbits around the Earth - effectively?
-4
Can bad satellites be pulled out of orbit with an Orbital Mass Accelerator?
3
How would propagation differ between a GEO and a Retrograde GEO?
2
How presise could 2 satellites "thread the needle" in orbit?
1
Which orbit around Earth has the least perturbation?
0
Optimal time and coordinates of intersection of a spacecraft with an object on orbit
See more linked questions

10
At which point would two GSO/GEO satellites with similar orbital elements be closest to each other?
3
What are low-mass ways of supplying power for a 4.5kW ion thruster?
5
How do SDP4's "Deep space" corrections to SGP4 account for the Sun's and Moon's gravity?
2
Can orbital maneuvers be performed by a solar sail to correct eccentricity?
5
How much does the tidal effect affect satellites in a retrograde orbit?
5
Proposed spacecraft propulsion with particle accelerator