Are today's spacecraft and carrier rockets really for one use only (launch and landing)? And then they can't be used anymore?

The TL;DR answer is: it depends.

What's rapidly transforming the industry is that some rockets are now partially, (even mostly) reusable. Below, the two boosters from the Falcon Heavy land. Both are reused from previous flights. 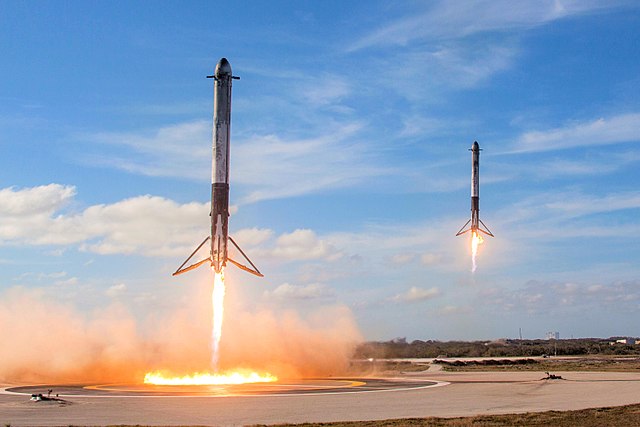 SpaceX and Blue Origin have both launched and successfully landed boosters, and both companies have re-flown those boosters. It's important to remember that both are only seeking to go to Low Earth Orbit(LEO), which is a short trip.

By contrast, virtually none of the SLS system NASA is developing is reusable because that rocket is aiming to put much larger payloads into deep space

For most of the history of spaceflight, reuse was a dream. The first rockets were derived from ICBMs, for which reusability was pointless. So the entire rocket was thrown away, and for manned missions, only the return capsule returned on Earth. These could theoretically be reused, but nobody bothered doing that.

Later on, various experiments always seemed to show reusability needed technology beyond the current state of the art, and/or would be more expensive to design than building a few rockets (meaning reusable systems would need a much higher flight rate than there was demand at the time to be economical). Space agencies did look at reusability time and time again (Dyna-Soar, Hermes, HOTOL, Sänger, MUSTARD, X-33, DC-X, for example).

Only NASA had a go at putting a reusable system into production (the Shuttle) and found out the hard way how expensive it would be to a. develop all the new technology necessary and b. refurbish the Orbiter after every landing because the high-tech approach they used was very maintenance-intensive.

Almost all these systems used wings to land the spacecraft horizontally on a runway. This made them large, heavy, and vulnerable. Landing a stage vertically was not looked at until the 1990s with the DC-X. SpaceX and Blue Origin demonstrated this to be a viable approach, and much cheaper than a spaceplane.

In particular, the single huge advancement SpaceX made is a reusable launcher (Falcon 9) and reusable spacecraft/lander (Dragon) that are economically viable.

There are still no systems fully reusable - Falcon 9 second stage burns up on reentry - but its cost is relatively minor relative to the complete stack.

Before SpaceX, there was the Space Shuttle - with reusable orbiter and solid rocket boosters, and disposable liquid fuel tank. The one big problem with the Shuttle was economy though - the launches could never turn up a profit, because the process of refurbishing and preparing the orbiter after each landing was exceptionally costly - like systems that were supposed to last 50 flights would begin failing after 5, and had to be checked after every single one. Launching and refurbishing Falcon 9 costs about 1/10th of the cost of a shuttle launch, and while they payloads are smaller, the cost difference makes the system actually profitable, and able to fund own R&D and growth instead of being an eternal money sink.

Not the answer you're looking for? Browse other questions tagged spacecraft reuse or ask your own question.

15
Why can the Falcon 9 be reused while the SLS cannot?

9
Are the Falcon 9 landing legs aerodynamic surfaces as well?
18
Why aren't there any space tugs in use?
13
Why is Dragon the only spacecraft that is currently in use to not need a fairing for launch?
23
Can you really use Arduino for a small spacecraft?
6
Is a spherical rocket design a plausible replacement for current designs today?
7
Would reusability affect the performance of a rocket engine compared to a single launch version of that rocket engine
8
What is the procedure for naming spacecraft?
22
Why did Apollo spacecraft use both AC and DC equipment? Still used in present and future designs?
2
Have any deep-space spacecraft supported same-band turnaround of Earth-based doppler measurements?
23
What is the general shape and size of a space probe, and how are they launched?