Was the Space Shuttle TPS technology ever state secret?

I was a bit surprised to learn that the Buran used heat tiles looking very similar to that of the Space Shuttle. Considering its potential for military application, and the cold war period in which both the US Space Shuttle and Russian Buran were developed, was any of the heat tile technology ever classified as state secret? If so, how did the Russian space program end up with something so similar? Was any/all of the technology patented (which would account for public disclosure and availability of the necessary information to reproduce it)?

Apparently the technology wasn't even patented.

"Lockheed refused to file a patent, saying there was no market for it," Forsberg said. "It was put on the shelf and his research stopped for two years. Then interest from the shuttle program revived it."

As described in Heppenheimer's Development of the Space Shuttle, 1972-1981 Chapter 6, Thermal Protection, manufacture of the tiles is fairly simple. (I am sure the devil is in the details though).

A slurry of silica fibers of 1.5 micron diameter mixed with a collodial silica binder is pressed into rectangular molds, dried in a microwave oven, then baked in kilns. The resulting blocks were then shaped and coated with a reaction-cured glass coating.

The manufacture was simple enough that after Orbiter production ceased, replacement tiles were made in a small tile shop at Kennedy Space Center. 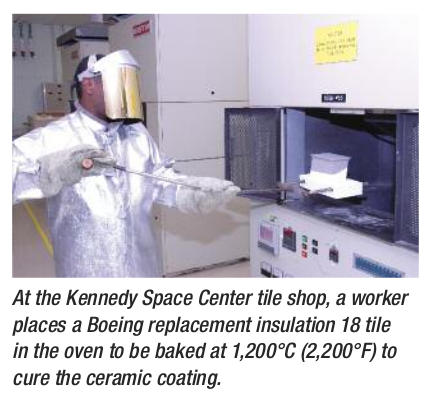 Picture from Wings in Orbit

Ancedotally, I don't remember any aspect of tile technology being treated as sensitive when I worked in the program. Detailed information is available in the Press Kit which was contemporary with the first launch.

Even though it occasionally launched military satellites from the Shuttle, NASA is explicitly civilian, created during the Cold War to demonstrate to the world our peaceful use of space for all mankind, etc, etc. Thus, they don't develop State Secrets.

From the law authorizing NASA:

§ 20101. Short title This chapter may be cited as the ‘‘National Aeronautics and
Space Act’’

§ 20102. Congressional declaration of policy and purpose (a) DEVOTION OF SPACE ACTIVITIES TO PEACEFUL PURPOSES FOR BENEFIT OF ALL HUMANKIND.— Congress declares that it is the policy of the United States that activities in space should be devoted to peaceful purposes for the benefit of all humankind.

32
Did the Space Shuttle have "military uses"?
26
Could the Space Shuttle have landed on any long runway other than those specially reinforced at Kennedy (TTS), and Edwards (EDW)?
26
Technology: How would a state-of-the-art space shuttle be built?
10
Who was the first to successfully implement on practice ablative heat shield?
4
Space Shuttle type tiles, or something similar: Commercially available?
11
Testing of rocket heat shield on Earth
1
What were the Shuttle TPS repair patches made of?
5
If a Space Shuttle tile deorbited on its own, what percentage of it's mass if any would remain in one piece until it reached the surface of the earth?