Been following a Make-Magazine article on how to make your own ion thruster: https://makezine.com/projects/ionic-thruster/

One suggestion I had is that my nails aren't perfectly perfectly centered, but I'm not sure if there's anything else besides this that leads to this setup not putting out any thrust.

Caution: Do not try this at home! It uses a 30 kV AC neon light power supply.

I've followed the instructions in this video, including the recommendations for safety:

Here's my build following the tutorial:

The instructional video shows a 30kv transformer providing the electromotive force for the ion engine/desk fan.

The user-created make video provides a clear reading of a 10kv transformer. That appears to be a strong indicator for lack of strength in the build.

Chuck up a set of nails in an electric drill and sharpen the points as suggested by uhoh, then pump up the volume... oops, increase the voltage with a more powerful transformer.

The tutorial video suggests a one-inch spacing for the exhaust nozzles. The maker video appears to be proportionally similar, but I suspect that no harm would come from bringing the ion destination a bit closer to the emitter. Not too close, perhaps another five to six millimeters.

It's difficult to fathom science in Imperial units, but these videos show that it works too.

I very strongly suspect the sharpness of the points on the nails is key. This relies on field ionization of the air, and that is caused by points on the nails sharp enough so that electric fields near the tip are sufficiently high (of order volts/Angstrom) that they will either rip an electron off of individual molecules or atoms in the air producing positive ions, or add an extra electron producing negative ions.

Field desorption (FD) is a method of ion formation used in mass spectrometry (MS) in which a high-potential electric field is applied to an emitter with a sharp surface, such as a razor blade, or more commonly, a filament from which tiny "whiskers" have formed.

Separating the electron from a neutral atom or molecule is hard work and usually has low efficiency. In real ion thrusters for space application, the majority of the weight and power consumption are a result of the ionizing aspects of the design, rather than the acceleration aspects.

You'll need to find a way to either sharpen the nails, or produce some whiskers on them. I think this was omitted from the tutorial you are following.

below: Slide 52 from Ion sources Ionization and desorption methods explains that the extremely strong field of order 1E+10 V/m needed to ionize atoms is obtained by a needle at 10 kV potential when the radius of curvature of the tip is decreased to 10 microns. As long as the distance to ground is large, it matters very little if it's 1cm or 10cm. From the point of view of the field at the sharp tip, that's nearly infinity. Almost all of the potential drop happens in the first millimeter or so, and the field is only high enough to ionize atoms or molecules at the very tip. 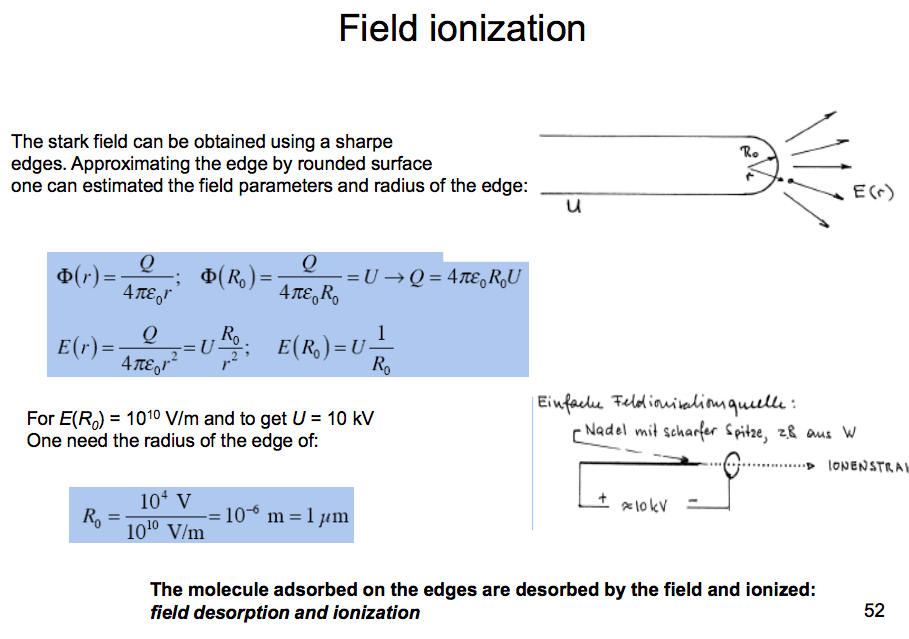 This principle is also used in some designs for electric thrusters for small spacecraft. The implementation is a little different though. Instead of a metal point in a gas, the needle is hollow and a liquid propellant is introduced into the capillary space. When there is a high field, the liquid naturally forms a cusp or point called a Taylor cone. Individual atoms will become ionized and leave the surface.

When operated differently, the Taylor cone will reach a mechanical instability and ionized droplets will be formed. This is called Electrospray ionization and is distinct from a field ionization ion source.

Here's one example of an electrospray thruster with an array of microfabricated sharp points.

Field-emission electric propulsion (FEEP) is an advanced electrostatic space propulsion concept, a form of ion thruster, that uses liquid metal (usually either caesium, indium or mercury) as a propellant. A FEEP device consists of an emitter and an accelerator electrode. A potential difference of the order of 10 kV is applied between the two, which generates a strong electric field at the tip of the metal surface. The interplay of electric force and surface tension generates surface instabilities which give rise to Taylor cones on the liquid surface. At sufficiently high values of the applied field, ions are extracted from the cone tip by field evaporation or similar mechanisms, which then are accelerated to high velocities (typically 100 km/s or more).

Final answer to this question: Talked to a professor at Cal Poly who specializes in electric propulsion about this project, she tells me this Make Magazine project shouldn't work at all. She stated that there needed to be way more than 7 cathode "holes" (i.e copper piping), and that this should only be able to work in a vacuum.

I did notice in this project, when I had a HUGE voltage spike from my power supply being turned on, that there was a little movement from the napkin placed up front. My guess is that the project from this Make Magazine only worked because it utilized extremely high voltage. In theory however, from my year of talking to people and looking around on the internet, this shouldn't be able to work.

Not the answer you're looking for? Browse other questions tagged propulsion engineering ion-thruster or ask your own question.

8
How to measure thrust of experimental ion engine
2
Solid metal fuel for nano satellite thrusters
2
What are all the kinds of electric propulsion that don't qualify as ion propulsion in standard spaceflight lingo?
0
Ion Lifter Thrust Calculation Problem