Could a harpoon-like gun be used by an astronaut to stop drifting away from a ship?

I saw the movie Gravity.

Spoiler alert, hover with your mouse over the yellow bar below to reveal a part of the movie's plot:

In the movie some astronomers die just because they were unable to hold on to the satellites or space stations and by hard luck they are left alone in the space with a going-to-empty oxygen supply tanks which empties and they die.

Why can't they have a gun kind-of thing with a string/rope? One end of the rope is tied to them and the other end to the dart that is inside the gun. If they shoot pointing to the space station, the dart kind of thing goes and sticks to space station. Thereby they can use that string/rope to get back to the station. For me it looks a simple thing to invent and produce.

Problem with what you propose, a kind of harpoon with probably a soft-tipped and magnetic head tethered projectile so it doesn't damage / penetrate the station's hull yet still holds onto it once it would reach it, is that the shooting of a kinetic projectile in one direction would propel you with equal force in the opposite direction since there's nothing to hold on to in a freefall orbit around the Earth and the law of conservation of momentum as implied by Newton's third law of motion states that: "when one body exerts a force on a second body, the second body simultaneously exerts a force equal in magnitude and opposite in direction to that of the first body". 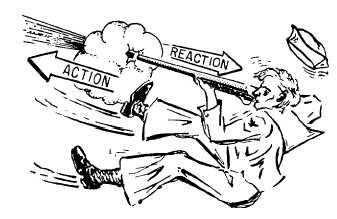 Newton’s 3rd Law of Motion: For every action there is an equal and opposite reaction

Now, the projectile would probably be a lot lighter than your own and the extravehicular suit's total rest-mass, so the dart would still propel relative to your initial point faster towards the station than you would be pushed the other way (with magnitude of linear momentum being $p = mv$, where $m$ is the mass of the object and $v$ its velocity), but since you're already moving with some velocity away from the station, otherwise you wouldn't have these problems to start with, the difference might not be enough and you possibly wouldn't have a tether long enough to reach the station. And you should really try not to tug on the tether while still flying towards the space station and unwittingly reduce its velocity and make it twist and bend.

Targeting wouldn't be easy either, since you'd have to fire it from the center of your mass perpendicular to the remaining two axes than the one you're firing in, not to merely end up in an uncontrollable spin. At the exactly the right time too, since you'd most likely already be spinning relative to the station as a result of your unexpected separation from it. To put it differently, for example, if you were standing on ice and fired a gun from your right hand at your waist, even if you managed to keep your balance after the gun recoils (something you wouldn't be able to in microgravity of space, remember, there's nothing to really hold on to), you would end up in a clockwise spin on the ice with only a small drag of the ice on your shoes eventually stopping you. There is no meaningful drag in outer space (at least not meaningful for our case), so you would spin indefinitely or until some other body with mass absorbs your angular momentum. The physics behind this are explained a bit more in the LiveScience article on What Would Happen If You Shot a Gun In Space?

Anyway, there are better ways though and a lot of research went into developing various astronaut propulsion units that are constantly improved on throughout the manned space exploration history. What is common to all of them though is that they try to control the relative movement on all three axes, and your pitch, roll and yaw. 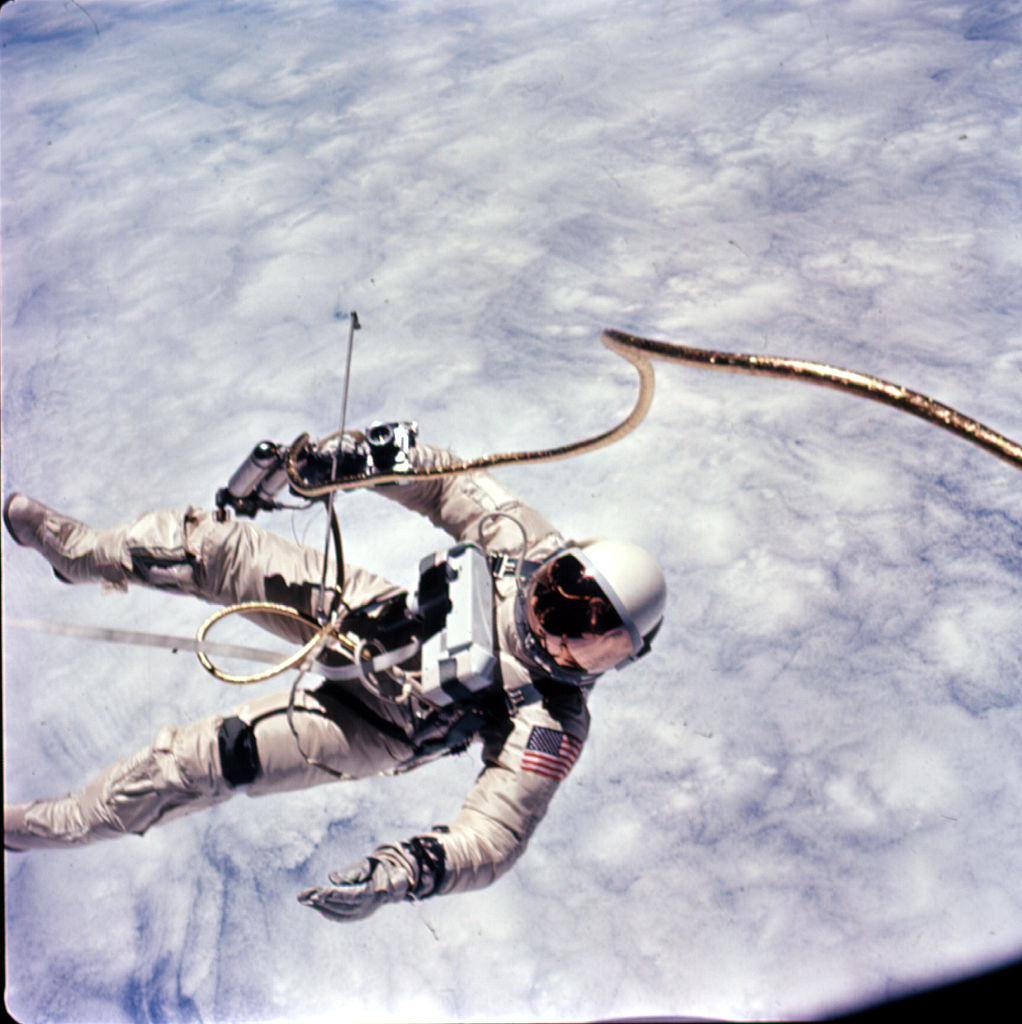 Early versions of astronaut propulsion units were handheld and that didn't prove too intuitive to control and had too limiting amount of propellant to be really of much use except for providing short entertainment for some and mild annoyance for others of its early astronaut testers (they were only ever tested while the astronauts were tethered to the space vehicle), but later versions (e.g. the Manned Maneuvering Unit) evolved to be easier, more intuitive to maneuver and carry useful amounts of onboard propellant to allow for shorter excursions in the space vehicle's vicinity.

The latest development in astronaut propulsion units (Simplified Aid for EVA Rescue or SAFER) is even more advanced propulsive backpack with ability to automatically stabilize uncontrolled rotation of its carrier. 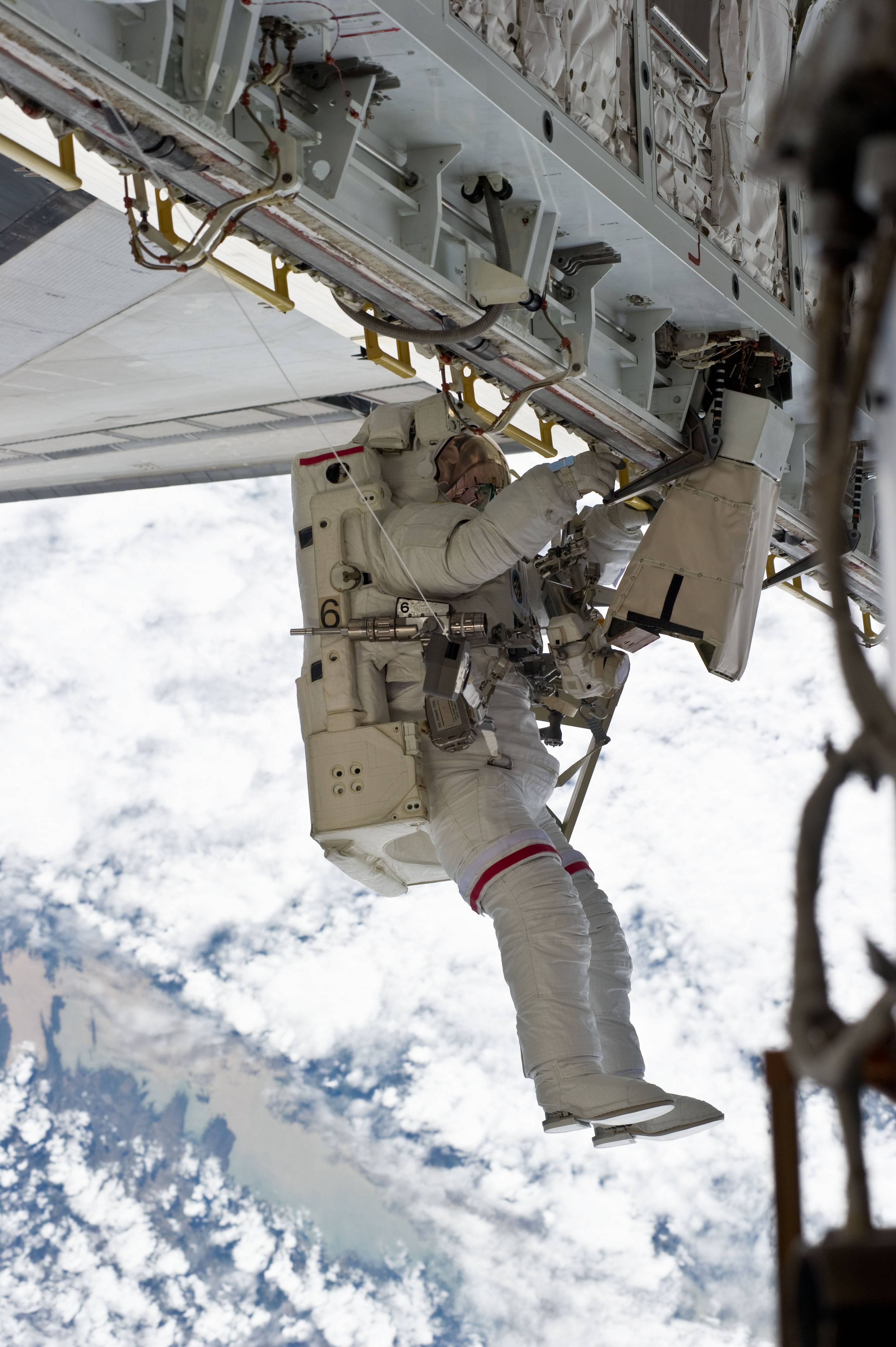 It is now a standard equipment carried by every spacewalking astronaut in an Extravehicular Mobility Unit (EMU) during their Extravehicular Activity (EVA) at the International Space Station (ISS). It is however a self-rescue device and would only be used in an emergency. It is not meant as a mobility device to assist astronauts during normal EVA conditions, and ISS spacewalkers are tethered to the space station and use safety grips on its outer hull to push against.

Not the answer you're looking for? Browse other questions tagged iss propulsion microgravity eva or ask your own question.

16
Could a ship take off from Earth using ion thrusters?
1
Could friction heat from aerobraking be used to power propulsion?
10
Could an ISS astronaut photograph something like this 1km “Van Gogh” if they knew it was there?