What is Canted Turnstile Antenna System? What it its Applications?

Spin stabilized satellites will usually require an omnidirectional type antenna system since their aspect is continually changing as viewed from earth. The turnstile antenna or a variation of it is a simple, practical, system for this purpose.

and goes on to say:

The normal turnstile antenna consists of two half wave length dipoles mounted at right angles to each other. [...] The dipole pairs are excited such that they are phased 90 electrical degrees apart.

The canted turnstile is formed from four monopole antennas approximately one quarter wavelength long. The bases of the antennas are usually separated by some distance (d) and the antennas are tilted at an angle (a) to the plane containing the bases (Figure 3) 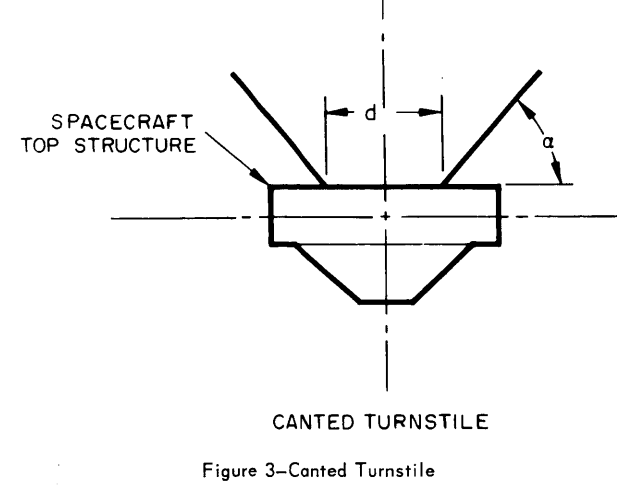 Reasons for Using the Canted Turnstile Antenna on a Spacecraft:

Usually a spacecraft structure is comparatively large in terms of the wavelength used. This forces a separation of the bases of the monopoles. By using a canted turnstile on a flat surface symmetric to the spin axis the base separation may be minimized. This will usually provide much better coverage and a smoother pattern as the satellite rotates.

The canted type antenna will also fit into most vehicle shroud compartments without folding. This increases the reliability of the system.

A product description from GOM Space showing uniformity with a range of only +1.6 dBi to -1 dBi:

The turnstile antenna consists of four monopole antennas combined in a phasing network in order to form a single circular polarized antenna. The antenna pattern is almost omnidirectional and there are no blind spots which can cause fading with tumbling satellites.

The antennas are compatible with other vendor's structures and can be mounted on either the top or bottom panel of the nanosatellite. The antenna PCB is designed to be the least obstructive to any top or bottom mounted payload or panels. It has a low profile that allows a solar panel to be mounted on top, and a large diameter hole in the middle for a camera lens or similar.

Here are some radiation patterns that I found in a quick search. No affiliation, etc. While the shapes may look very lumpy, the range is only +1.6 dBi to -1 dBi. 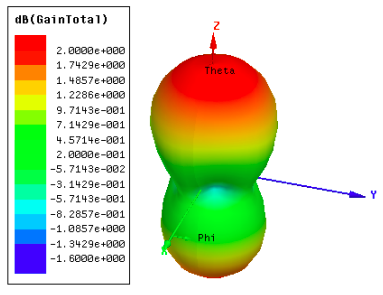 See also Why did Sputnik 1 have four antennas? as well as Puzzler: Is this a Sputnik? for more on these kinds of antennas on early spacecraft.

16
Why did Sputnik 1 have four antennas?
5
Puzzler: Is this a Sputnik?

8
Why is TESS' high gain antenna made of undulating BLACK fabric rather than metal?
13
What is the large circular device with a dozen concentric circles on Sentinel 3B?
3
What is the largest antenna deployed in space?
2
Did New Horizons use its smaller medium-gain antenna for most/all downlinking of Pluto and Arrokoth flyby data?
1
Is OSIRIS-REx's high gain antenna nearly the same as TESS'? If so, why?
7
How does the pattern on the MarCo cubesat's antenna boost data-transmission?
3
How exactly were the signals from quad dishes of Apollo Deep Space High-Gain Antenna or Russian B-529 processed for local control of tracking?
3
How do I calculate what antenna I need for my cubesat?
6
What are the most common practical design specifications for antenna in space?