Was the Orbit Pavilion triggered by real communications events?

The October 2016 NASA JPL news article Art Turns Public Eyes (and Ears) Toward Space describes an artistic interpretation of the communications between a number of NASA Earth satellites and ground stations.

The Orbit Pavilion is a sound installation opening Saturday, Oct. 29, at The Huntington Library, Art Collections & Botanical Gardens in San Marino, California. The installation lets listeners "hear" 19 of NASA's Earth science satellites pass over them, providing a fun and engaging way to learn about space. It originally debuted in 2015 as part of New York's World Science Festival.

The article goes on to explain that the communication "causes" the interpretive sounds to be generated:

From the outside, the installation looks like a giant, futuristic seashell; enter, and you can hear as satellites approach the horizon and sail overhead. Each satellite causes speakers to generate a simulated sound, ranging from desert winds to a crashing wave or rustling leaves. A digital screen identifies the individual satellites, providing an opportunity to learn how they contribute to NASA's science missions. (emphasis added)

Question: I am wondering if the installation's electronics sampling some website or data link in order to be triggered by an actual communication, or was it just programmed with a previously scheduled communications plan, and timers initiated the sounds, or perhaps something else?

Orbit is the brainchild of The Studio at JPL, an art and design workshop that develops creative ways to educate the public on space exploration. Since 2003, the team has developed everything from expoplanet travel posters to digital light sculptures, all with the aim of increasing public awareness of space science.

The team collaborated with Jason Klimoski and Lesley Chang of Brooklyn-based architectural firm STUDIOKCA, who conceived of and designed Orbit's seashell structure. They also collaborated with Shane Myrbeck, who composed Orbit's soundscape and engineered the audio system.

below: Images from NASA JPL News; Click for full size.

Caption: Looking over the Orbit Pavilion, a sound installation designed to teach the public about NASA's earth science satellites. The installation was designed at JPL and opens to the public at The Huntington Library, Art Collections & Botanical Gardens on Oct. 29, 2016. Image Credit: NASA/JPL-Caltech 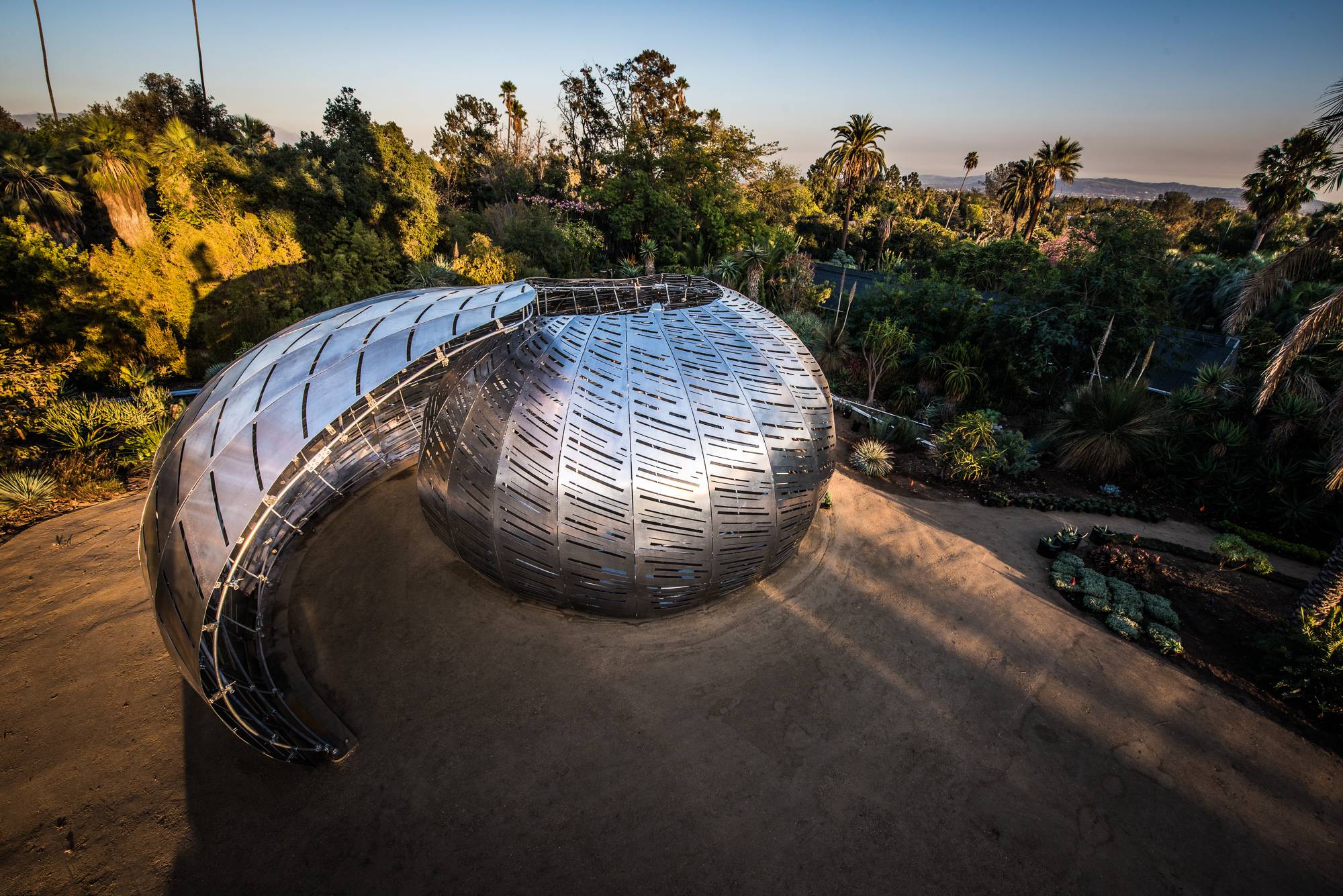 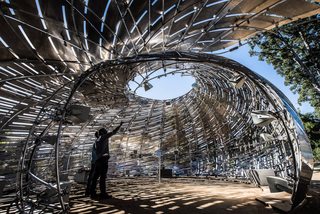 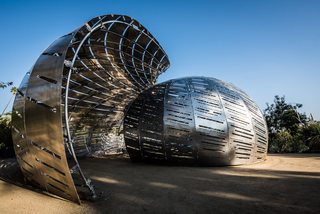 You are asking to see behind the mask of Oz the All Powerful, All Seeing, All Knowing. Tread not lightly into this domain O Seeker! Ye risk much.

As someone once said, "just programmed with a previously scheduled communications plan, and timers initiated the sounds". Perhaps you too, one day, may step behind the sacred curtain of knowledge and beguile the world. And if we must quibble about directness of causation, only think hard on the butterfly effect and entanglement. Is synchronicity of purpose or schedule causal? Perhaps. Or not. These distinctions blur.

In this, what matters more? The knowledge, or the wonder that leads one to seek the knowledge?

Not the answer you're looking for? Browse other questions tagged artificial-satellite nasa communication space-art or ask your own question.

57
Curiosity: Why did they “reinvent the wheel” instead of using pressure tires?
9
What's the current timeline for NASA's Mars orbiter laser communications?
12
Does communications with spacecraft red shift the further away they are?
2
Real time communications in space
3
Is the Hollywood “Enemy of the State” satellite at all based on a real satellite?
55
This image of the Space Shuttle is truly beautiful, but is it real?
2
Why will radioastronomy telescopes be used to listen to InSight's entry into Mars' atmosphere instead of DSN?
5
Was the nature of Explorer 3's orbit intentional?
1
Was the famous SPICE package of programs, utilities and data kernels named after “Melange” found on the planet Arrakis?