How do Tom & Jerry (CANYVAL-X) measure their alignment with a distance source accurately?

According to the Spaceflight 101 article CANYVAL-X – Tom & Jerry:

CANYVAL-X is a two-satellite CubeSat mission aiming to demonstrate a Vision Alignment System that could enable a virtual telescope with very long focal length for application in cutting-edge heliophysics and astrophysics missions. The mission consists of a 2-Unit CubeSat, nicknamed Tom, and a 1-Unit satellite “Jerry” that will maintain optical alignment over a distance of ten meters for time frames sufficient for astronomical observations.

"The key differentiator with our mission is that we are attempting to align two satellites along an inertial line of sight to a distant celestial target and hold them in alignment for a long enough time to make a science measurement," said (Neerav) Shah, an engineer at NASA's Goddard Space Flight Center in Greenbelt, Maryland. "Although others have flown two or more satellites in tandem, we are the first in the world to even try holding them in alignment to a distant source."

But how does Tom & Jerry's visual alignment system measure both their relative alignment and simultaneously alignment with respect to a third, distant point in space, and to a precision which is relevant for a future actual virtual telescope?

below Left: "Figure 2: Illustration of the 2U actively controlled CubeSat (Tom) and its elements (image credit: CANYVAL-X collaboration)" From here 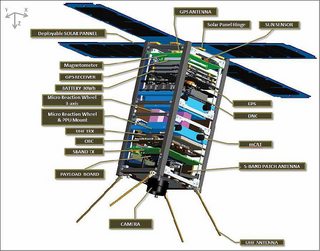 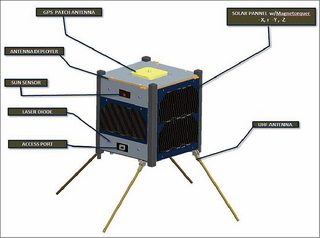 The mission earlier this year didn't succeed because of communications problems. It looks like there's not going to be any available data on performance of the system.

The intended sequence starts when

the approach phase is initiated and Jerry begins to automatically transmit its absolute orbital data to Tom via the inter-satellite link system. Tom maneuvers closer to Jerry based on the obtained relative orbit estimation. During the mission design stage, it was initially assumed that a single electrical thruster could be used to position Tom. However, it was subsequently determined that the thrust of the propulsion system would not sufficiently satisfy the expected performance requirements: whereas the theoretically determined thrust of the propulsion system was 200 μN, only 50 μN turned out to be available following development. Therefore, an alternative orbital control method using air drag was proposed. Tom controls its attitude to maximize and minimize air drag according to the along-track position secular terms given under Hill’s dynamics, while the originally designed propulsion system is used intermittently upon request by the ground station.

Validation of the vision alignment system during the mission phase is initiated via telecommand. Jerry orients the Sun and activates its LED markers while at the same time Tom controls its relative orbit to maintain its position with respect to the Sun and Jerry. Tom determines whether Jerry is in the field of view of the visible-light camera and then estimates the relative position and attitude, which is used to perform feedback control to maintain the satellites’ alignment for a few minutes. In this simulation, the alignment is maintained for about 2 min by utilizing the propulsion system to implement a maximum thrust level of 50 μN. After the two CubeSats have demonstrated the operation of the vision alignment system, their mutual distance increases. Tom then repeats its approach to Jerry, and the process is repeated. In this manner, the vision alignment system is re-validated over the mission phase.

The "Vision Alignment System" is described in the construction paper as: 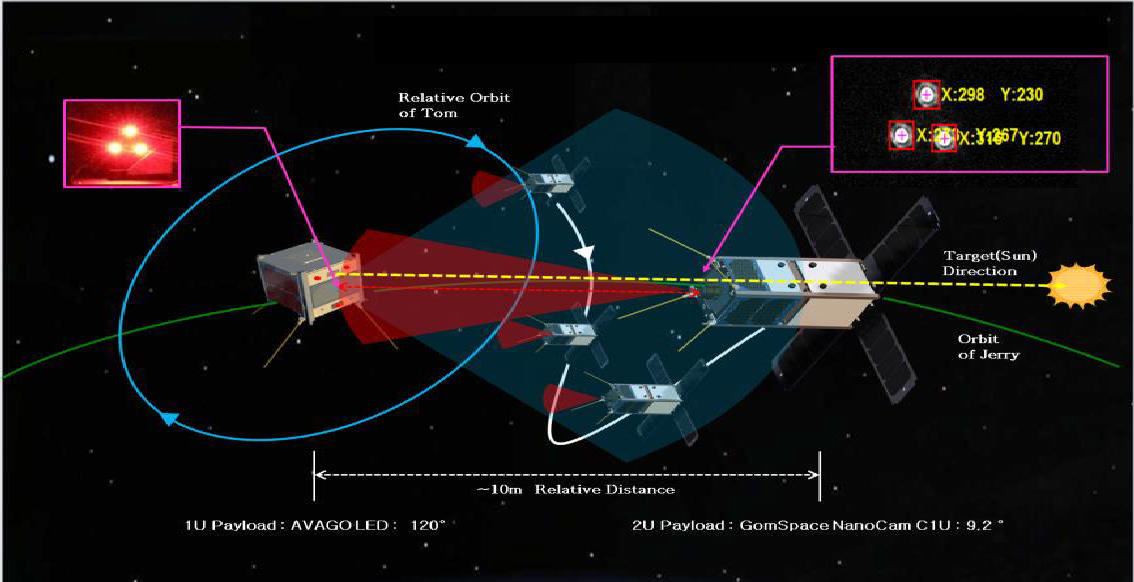 (from Figure 1 of the construction paper)

It's using vision, in the sense of imaging, to recognize and measure the (projected) position of the laser sources, and from that calculating alignment and distance.

The planned performance wasn't all that aggressive: 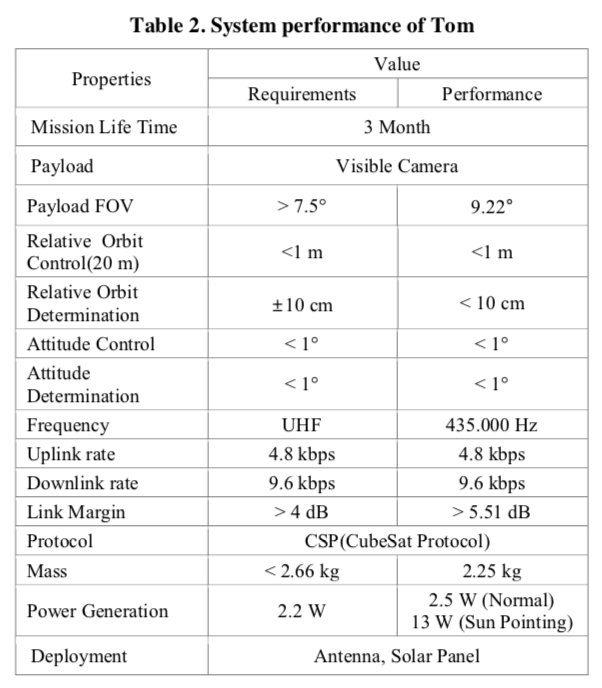 How does that connect to the needs of a "virtual telescope"? I don't think they're talking about the wavelength-scale alignment needed by e.g. the segments of a composite mirror. Rather, they seem to be focusing on (pun intended) the larger structural elements of a Really Big telescope:

Current space telescopes have a single structure, and consequently, their focal length cannot be elongated sufficiently. Sometimes, this problem prevents the improvement of the resolution of space telescopes. In order to resolve this problem, the concept of Virtual Telescope is proposed. A Virtual Telescope consists of two spacecraft; one has a lens system, and another has a detector system. By using formation flying, they can be simplified as a virtual telescope system. Then, the relative orbit distance of two spacecraft can be a baseline of a virtual telescope system (1,2). The most important point of Virtual Telescope is to build the inertial alignment with respect to a celestial object and to maintain it in space environment. Inertial alignment means that relative position and relative attitude of the two spacecraft are simultaneously aligned with a target.

The first reference there is "THE VIRTUAL TELESCOPE DEMONSTRATION MISSION (VTDM)" N Shah et al 5th International Conference on Spacecraft Formation Flying Missions and Technologies, May 29-31, 2013, which talks about a 100m separation demonstration for "a “virtual telescope” (VT) with very long focal lengths (20 m to >1,000 km)". They proposed a mission with more stringent alignment goals than CANYVAL-X, but not all that more stringent: Still millimeter scale. 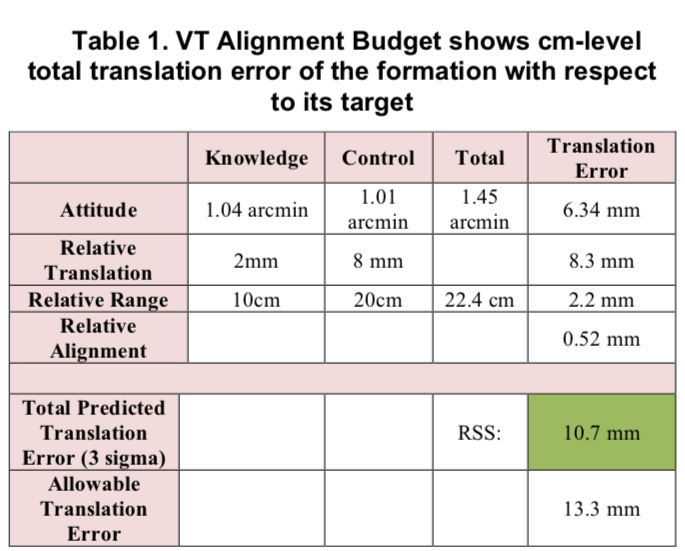 The second reference is “Orbit Design and Control of Technology Validation Mission for Refractive Space Telescope in Formation Flying,” AIAA Guidance, Navigation, and Control Conference, SicTech 2014, January 13 - 17, 2014 with overlapping author list; it's paywalled but basically talks about the same kind of thing. To me, the most interesting part of that reference is the discussion of a refractive space telescope. That's perhaps a topic for another day, but it's part of the motivation for the long focal length.

Coming back to the main point of the Question, the goal of these projects seems to be to create mm-scale alignment across 100m- or km-scale free-flying structures. They would then use active optical elements in the telescope system to get down to their final precision. That's still an advancement in station-keeping, but not nearly as intense an advance as it first seemed.

I have no sources beyond the pages you link to, but the do talk about the attitude and orbit control precision and instruments in the EOPortal article you link. It looks like Jerry has no propulsion and maintains orientation to within +- 5 degrees using a sun sensor and magnetotorquers. Tom, it would seem uses it's miniature plasma thruster to maintain its position between Jerry and the Sun about 10m away from Jerry to within 20cm or so. It has magnetotorquers AND reaction wheels, so can maintain orientation to 1 degree. They both use GPS to identify their location to within 10cm. It doesn't look as though the lights on Jerry and the camera on Tom are part of the guidance system, although they might be.

Not the answer you're looking for? Browse other questions tagged artificial-satellite cubesat imaging space-telescope or ask your own question.

8
How well could the tether tension method of attitude control actually ultimately work for a cubesat system?
1
How could the recently explained "glints" seen by DSCOVR appear so compact considering the finite size of the sun?
4
MarCo, Polo? Any further news, or images, or transmissions from the MarCo deep space cubesats?
3
Hubble's one-gyro mode; how does it work for attitude control, stabilization, and slewing?
3
What can be done in future mass-cubesat deploys to make them "less irksome" to orbital space debris experts?
2
Which Cubesat Cameras Actually Worked in Orbit before 2019?
4
What's the status and timeline for Millimetron? (Russia's 10m Deployable Antenna cooled to 6 K Earth-Space VLBI)
0
Why was the Rossi X-ray Timing Explorer decommissioned in 2012? Why wasn't it deployed another ~100 km higher where drag would have been a lot less?
4
Where can I read about the other 17 telescope proposals that NASA’s Astrophysics Explorers Program didn't accept in 2019?