Where on Comet 67P is the Philae lander?

My institute has a 3D printed model of Comet 67P/Churyumov–Gerasimenko in its common room. Someone recently asked where the Philae lander is located. I know that it's been found but I can't point to it on the model, because that ESA page only has close-ups of its location, not a broad view showing where the lander is located in relation to the comet as a whole. Does such a view exist?

It would be nice to know also where it first touched down and where it bounced before coming to rest, if those things are known.

The Philae lander's last observed location in September 2016 is on the comets smaller lobe, settling there after a few bounces following a 2 hour "flight". It is reasonable to assume that it is still there or nearby, but 67P is a comet, and even though it does not get closer than 1.24 AU from the Sun, there is always a possibility that it might have moved due to some surface event, since the local gravity is only about 1E-04 that of Earth's.

The visual confirmation came just 2 weeks prior to rosetta's own comet landing date. You can find more pictures and a detailed description of Philae's adventures on the Rosetta blogpost dated Sept-05-2016 Philae Found!, which is also the source of the image below.

The images were taken on 2 September by the OSIRIS narrow-angle camera as the orbiter came within 2.7 km of the surface and clearly show the main body of the lander, along with two of its three legs.

The images also provide proof of Philae’s orientation, making it clear why establishing communications was so difficult following its landing on 12 November 2014.

Philae was last (previously) seen when it first touched down at Agilkia, bounced and then flew for another two hours before ending up at a location later named Abydos, on the comet’s smaller lobe. 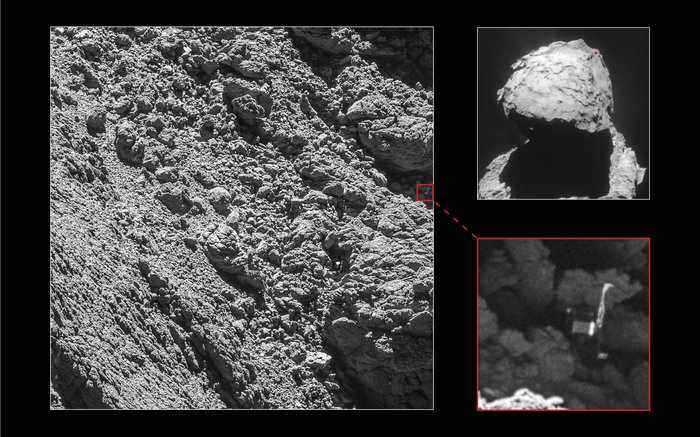 In the comments, Uwe posted a link with a detailed explanation of how the lander was found, which includes a diagram that very clearly shows the location of the site: 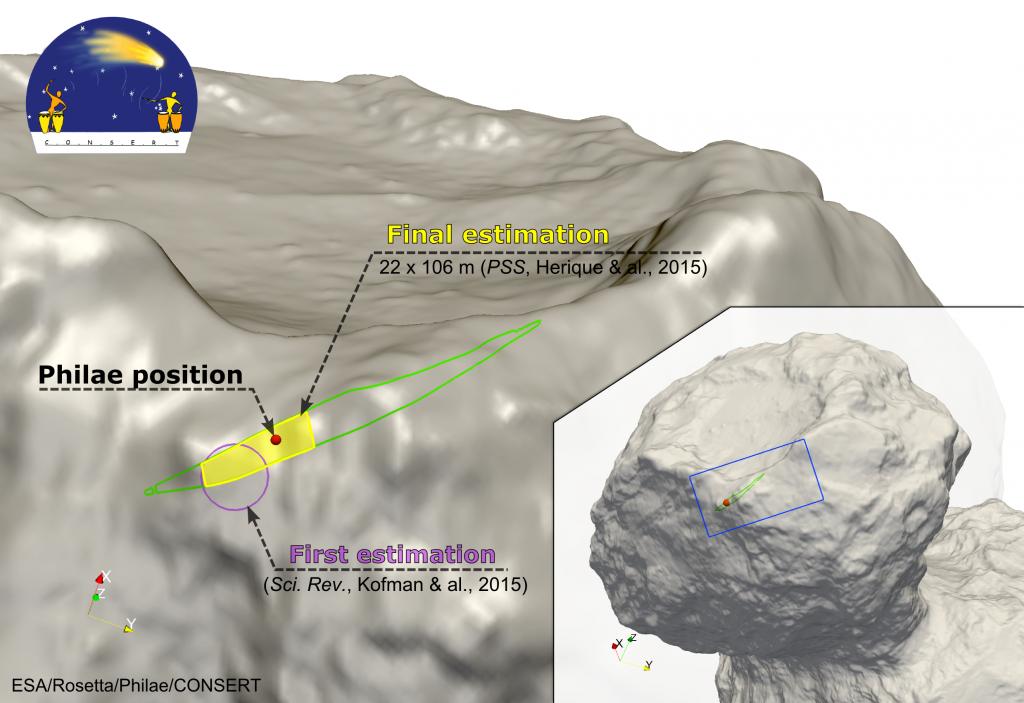 Not the answer you're looking for? Browse other questions tagged philae or ask your own question.

8
Rosetta's lander, Philae will "anchor" itself on Comet 67P. What level of control can we have over this?
9
If Philae lander had bounced off the comet and become uncontrollable, could we still have seen some of the descent photos?
10
Did we expect Comet 67P/Churyumov-Gerasimenko to be dusty?
8
Why is there no POV video of the Philae lander landing?
7
Could an upcoming comet lander be designed to cope with a greater variety of terrain types, compared to Philae?
6
Would a POV camera on Philae lander be possible if the mission was launched today?
8
Philae Lander - Were drilling samples collected and analysed?
8
Philae - organic molecules?
5
Why did Philae the comet lander bounce?