Could Jupiter's tidal forces be used to generate energy?

Let's say we have a colony on Europa (or any other Jovian moon really). Jupiter exerts a lot of tidal forces on its satellites. Could this force be used to generate energy for our colonists?

We don't really know how the tidal energy that Europa gets from its orbit around Jupiter translates exactly to its surface or subsurface activity, so it would be hard to speculate on any possible power plant types that we might employ to produce electrical power, but Europa's orbit is kept elliptical (orbital eccentricity of 0.0094) due to the resonance with the other Galilean moons, especially the Io and Ganymede that are in lower and higher orbits than Europa is, respectively:

The Laplace resonance exhibited by three of the Galilean moons. The ratios in the figure are of orbital periods. (Source: Wikipedia)

This translates into an enormous gravitational pull that is not synchronised with Europa's surface because of the libration effects, even though Europa is tidally locked to Jupiter. If this is hard to imagine, this is, for example, how Lunar librations look like:

Lunar librations in latitude and longitude over a period of one month (Source: Wikipedia)

This Laplace resonance of the Io-Europa-Ganymede system of Jovian moons (their relation locking is described by $\Phi_L = \lambda_{Io} - 3\lambda_{Eu} + 2\lambda_{Ga} = 180°$, where $\lambda$ are mean longitudes of the moons), on top of a small Europa's orbital inclination with respect to the Jovian equatorial plane (0.470°) results in also relatively small orbital eccentricity, but enough to result in tidal bulges, tidal dragging and torque (see Wikipedia page on tidal locking mechanisms for description) that translate into thermal energy and keep Europa a geologically active body.

Observations of the Galileo spacecraft have proven that Europa's surface forms fresh cracks and sustains a tenuous ionosphere that needs to be constantly replenished not to be blown away by radiation pressure, so we know for sure that Europa has dynamic processes that might result in usable, easily convertible into electrical power geothermal activity, perhaps in a form of seafloor hydrothermal vents like some theories suggest or even periodic and stable surface geysers (perhaps like the renowned Yellowstone Old Faithful Geyser) like the presence of surface magnesium seems to suggest: 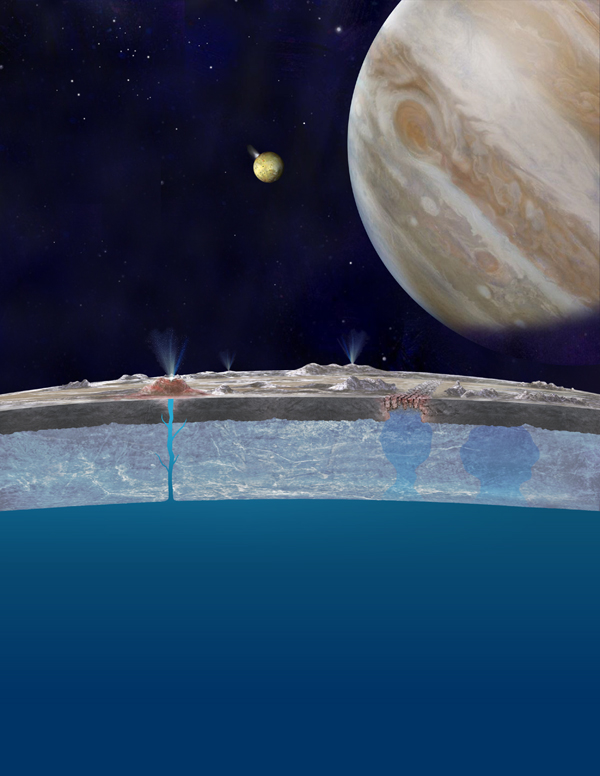 Jupiter’s moon Europa has an ocean under its frozen surface. The ocean is thought to be around 62 miles deep and is likely
made up of magnesium chloride, which leaks to the surface of the moon. (Source: JPL-Caltech)

The finding, based on some of the first data of its kind since NASA's Galileo mission (1989–2003) to study Jupiter and its moons, suggests that there is a chemical exchange between the ocean and surface, making the ocean a richer chemical environment, and implies that learning more about the ocean could be as simple as analyzing the moon's surface.

"We now have evidence that Europa's ocean is not isolated—that the ocean and the surface talk to each other and exchange chemicals," says Brown, professor of planetary astronomy at Caltech.

If the tidal energy would be easier to convert into electrical power with the use of geothermal power plants, tapping into the kinetic energy of subsurface waves with wave power plants, or if it sustains constant currents that could power hydroelectric power plants, that remains to be established though. Perhaps the planned ESA's (European Space Agency) JUICE (JUpiter ICy moons Explorer) mission will give some hints on that.

Not the answer you're looking for? Browse other questions tagged colonization planetary-science jupiter power europa or ask your own question.

21
Why is the Far Side of the Moon so different from the Near Side?
11
What causes the cracks on Europa to form?

13
Is solar system active cryovolcanism a potential viable power source for future colonies?
19
Are there proven sufficient $^3\text{He}$ reserves in the inner Solar System to sustain fusion reactors for colonisation?
4
Is there a way to achieve any kind of atmospheric flight on the moon Europa?
1
How would a robotic landing on an icy moon like Europa differ from landings on the Moon, Mars, Venus, Jupiter, Titan, asteroids, comets?
5
I'm going to invade Europa, any international interferences that could stop me?
10
Which side of Europa is which?
4
Would it be possible to use a electrodynamic tether or similar device on or within Europa to generate electricity from Jupiter's magnetosphere?
4
Why does Scott Manley say "the gravity of Europa is low enough that it's at the high end of what is possible in scuba with highly technical gear"?