What is the process to produce a chemical composition spectrum of a celestial body?

I have come across this spectrum, which depicts the chemical composition of Titan's atmosphere:

I would like to know how do scientists generate such spectra, starting with capturing the light emitted (or reflected) from a body, all the way to identifying the regions that correspond to specific compounds. What is the process by which such a spectrum is generated?

If the answer is too broad to be answered here, perhaps someone could provide another source (a book or a paper)?

The spectrum you show from Titan was taken using the IRIS spectrometer aboard Voyager 1. Of course Voyager 2 had one as well. A huge amount of work went into developing and optimizing the design in order to develop a precise optical instrument that would survive both the high g-force and vibrations of launch, and the years in a space environment while Voyager brought it to the planets. From Wikipedia:

Early versions of the IRIS were flown on the 1960s Nimbus 3 and Nimbus 4. In 1971, an early prototype was used on Mariner 9 to examine Mars.

From the paper Infrared spectrometer for Voyager discussed more below, some of these improvements are:

When we think of spectrographs we usually think of a narrow slit, a diffraction grating to spread the spectrum, and a position sensitive detector like a CCD. Of course for other wavelengths different types of detectors are used, and early spectrographs used photographic film instead.

But Voyager had a spectrometer. As pointed out in this Quora while a spectrograph spreads the spectrum out and measures many wavelengths at once, a spectrometer measures the intensity one wavelength at a time. This can allow for the much narrower resolution necessary to see narrowly spaced spectral lines.

The Voyagers' spectrometers (now both deactivated) are Michaelson Interferometers. There's an illustration of the instrument below. The biggest feature is the large telescope to collect enough light to get a strong signal after dispersing the wavelength so much. You can see an excellent photo of the telescope in this answer, it's beautiful!

The calibration procedure for IRIS is explained in Voyager Infrared Interferometer Spectrometer (IRIS).

I was going to recommend reading Voyager Infrared Spectrometer by Stuart A. Borman. Analytical Chemist, v. 53, no. 13, Nov. 1981 but I now see that it is paywalled. I'll look for a more accessible review.

The Michaelson interferometer is easier to see in the second image of IRIS-D. The idea is that you coherently split a beam of light and then recombine them with a beam-splitter but with one of the paths longer than the other. The interference of the two beams is different for each wavelength. You carefully measure the intensity while moving one of the mirrors, and record a very long series of intensities. Together, this plot of interference intensity versus mirror position is called an interferogram.

In the IRIS systems aboard the Voyager spacecraft, the mirror moved a total distance 1.58 mm during a scan, at a speed of 0.0351 mm/sec.

The interferogram is stored, and later transmitted back to the Deep Space Network. Back on Earth, scientists then take the Fourier transform of the interference signal in order to reconstruct the original spectrum.

below: Voyager's IRIS spectrometer, from here. 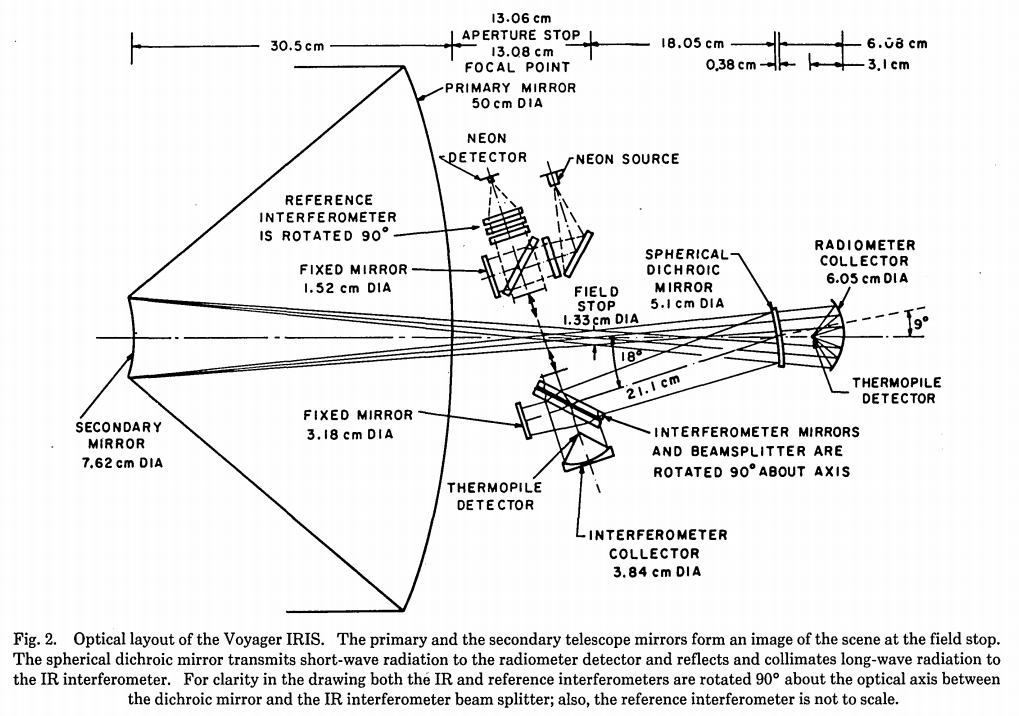 below: IRIS-D spectrometer for Nimbus-4, from here. 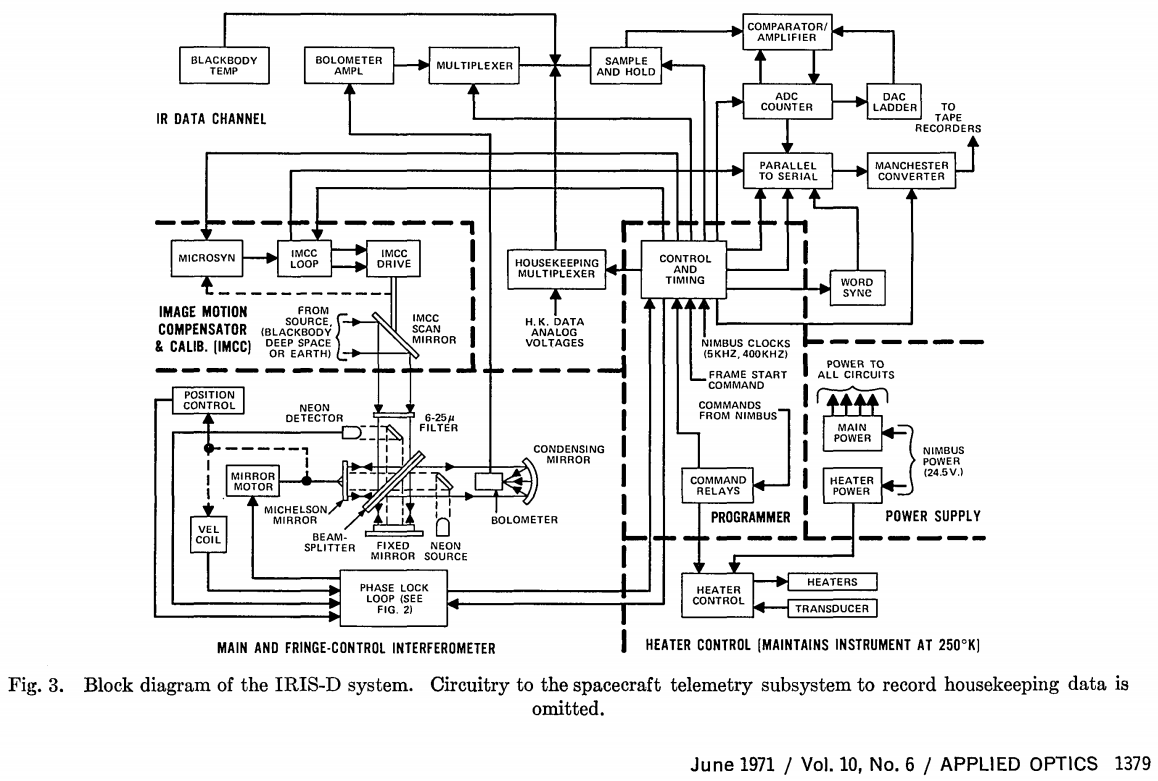 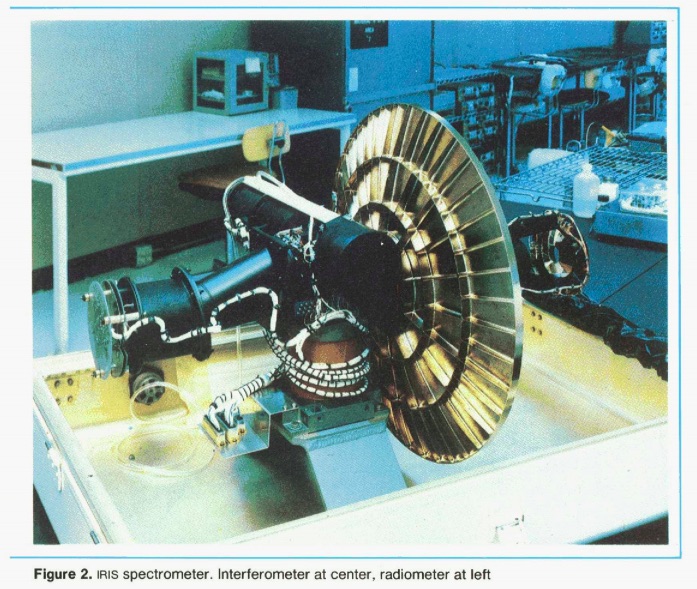 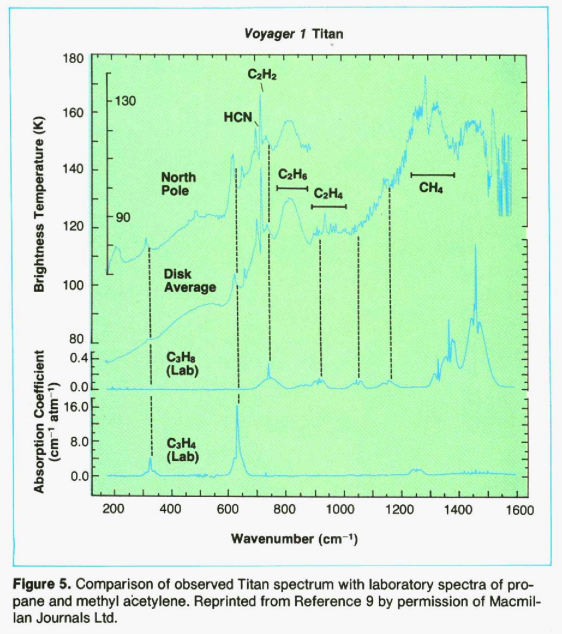 They use a tool called a spectrograph. There are a number of ways to make these, one of the easiest to understand is a prism. That prism breaks the incoming light in to a large number of colors, which can be then scanned and have the intensity measured to detect such items.

Really all that is involved is pointing a telescope at the planet with a spectrograph attached. You have to take in to account what might have changed the light, like the Earth's atmosphere (If taken from the surface), input light, etc. Yeah, there's a lot more to it, mostly in the sense of being properly calibrated, and there are a few tricks like using a star passing through the target to look at the atmosphere, but this is the basics of it.

As to how do they know what chemicals it corresponds to, they take an input light source on Earth and shine it through a known quantity of each gas, studying what the light does to the gas. Then they can compare some mixtures to verify the peaks or valleys are the same.

Not the answer you're looking for? Browse other questions tagged telescope chemistry titan detection spectroscopy or ask your own question.

4
Is Cassini equipped for detection of non-water-based exobiology?
10
What is required to produce rocket quality methane fuel and oxygen from Mars' atmosphere?
3
Would it be more viable to process moon rocks into Helium-3 on the Moon than doing so on Earth?
20
Why was Titan the first celestial body beyond Mars to be landed on?
6
What type of information can be gathered from a plot of brightness against wavelength?
6
What would a “water” landing on Titan be like? How viscous is the liquid?
1
Which scientific articles together give proof of all the chemical elements found on Mars?