How Many Martian Lagrange points are there? ...And are they useful for satellites?

Since Mars has two natural satellites compared to Earth's one, would it have a total of fifteen associated Lagrange points?

Might the points associated with Mars' natural satellites be in any way useful in terms of artificial satellite orbits?

The Phobos and Deimos L1 and L2 points are virtually coexistant with the moons themselves. I have seen that the L1 point for Phobos is 10 km above the moon. At that altitude, just build a large tower. L3 does exist for both, but it will be a very small area. L4 and L5 likely exist, and are somewhat larger, but they still won't have a significant effect.

Bottom line is, the 5 Mars-Sun points are all worth something. The moons, while they may exist, they are such a small size that they are not practical for any real use. The stability won't be significantly enhanced by being in one of the Lagrange points.

For tide locked moons the L1 and L2 points could play the same role that planet synchronous points play in Clarke towers.

Simultaneously lowering a tether from MPL1 Phobos ward and extending a tether Marsward can keep the tether hub balanced until the tether reaches Phobos.

The Mars Phobos L1 is a little more than 3 kilometers above Phobos' surface. A tether more than 7 kilometers long would be sufficient to maintain tension.

Soft landings via rockets on Mars' tiny moons would kick up dust and debris. Many particles would be near the moon's escape velocity and remain within the moon's Hill Sphere for a long time. This debris cloud is undesirable.

But using a tether from MPL1 or MPL2, materials can be lowered to the moon's surface without kicking up debris. There is a MPL1 based probe proposed where a tether would lower sensors near the surface of Phobos.

Once a tether is anchored to the moon, it can have a length greater than 7 kilometers. A 1,400 km Marsward tether could drop payloads into an orbit whose periapsis passes through Mars upper atmosphere. 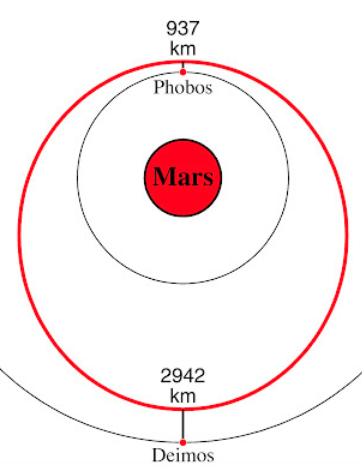 5
How far would the Mars L1 Lagrangian Point be from Mars?

15
Do we sufficiently understand mechanics of Lagrange point stationkeeping for EML2 rendezvous and assembly?
7
How could transfers between SEL1&2 and EML Lagrange points be utilized?
17
Halo vs Lissajous orbit: Which station-keeping strategy to select and when?
10
Are large halo orbits around L₁'s and L₂'s preferred over small orbits for reasons other than geometry?
17
Are some Halo Orbits actually Stable? (stable orbits about unstable Lagrange points)
8
Does it even make sense to talk about Mercury's triangular libration points (L4, L5)?
3
What was the probability that Osiris Rex would find Earth Trojans?
2
Do horseshoe orbits have anything to do with Lagrange points? Do words fail us here?
6
Are Lagrangian points associated only with the smaller body?
3
Can mascons have Lagrange-like points? In principle? At the Moon?