How were the Space Shuttle SRBs ignited? (with what?)

I'm unable to find how exactly the Space Shuttle's SRBs were ignited, or what exactly was used to ignite the rocket.

I'm trying to figure out the best way to instantly ignite a solid rocket reliably, and seeing as the Space Shuttle would fail rather dramatically if only one of the two SRBs were to ignite I thought it would be good to know.

Other information on solid rocket engine ignition would also be appreciated. Ideally I'm looking to make an igniter that is reusable and reliable, like a blow torch, not an expendable electric fuse as used in most model rocketry.

As this question has been answered I'd also like to add a useful resource on solid rocket ignition for future viewers:

SRB ignition can occur only when a manual lock pin from each SRB safe and arm device has been removed. The ground crew removes the pin during prelaunch activities. At T minus five minutes, the SRB safe and arm device is rotated to the arm position. The solid rocket motor ignition commands are issued when the three SSMEs are at or above 90-percent rated thrust, no SSME fail and/or SRB ignition PIC low voltage is indicated and there are no holds from the LPS.

The solid rocket motor ignition commands are sent by the orbiter computers through the MECs to the safe and arm device NSDs in each SRB. A PIC single-channel capacitor discharge device controls the firing of each pyrotechnic device. Three signals must be present simultaneously for the PIC to generate the pyro firing output. These signals—arm, fire 1 and fire 2—originate in the orbiter general-purpose computers and are transmitted to the MECs. The MECs reformat them to 28-volt dc signals for the PICs. The arm signal charges the PIC capacitor to 40 volts dc (minimum of 20 volts dc).

Here's a schematic of the igniter. 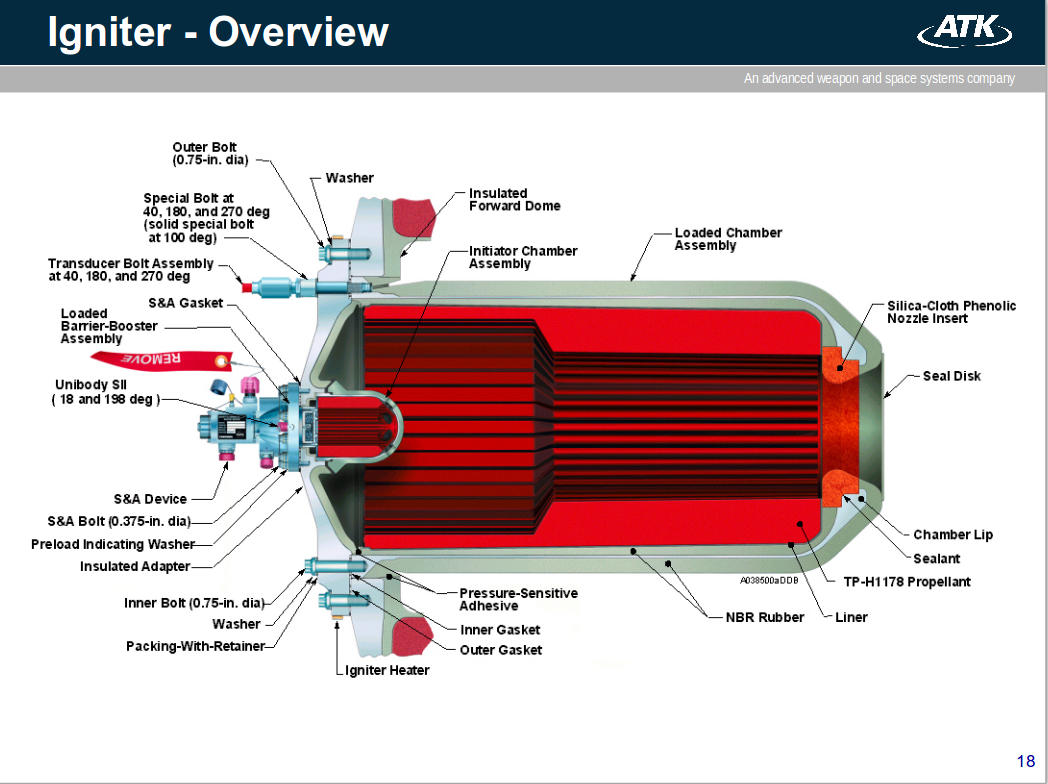 And this shows its location in the forward segment. 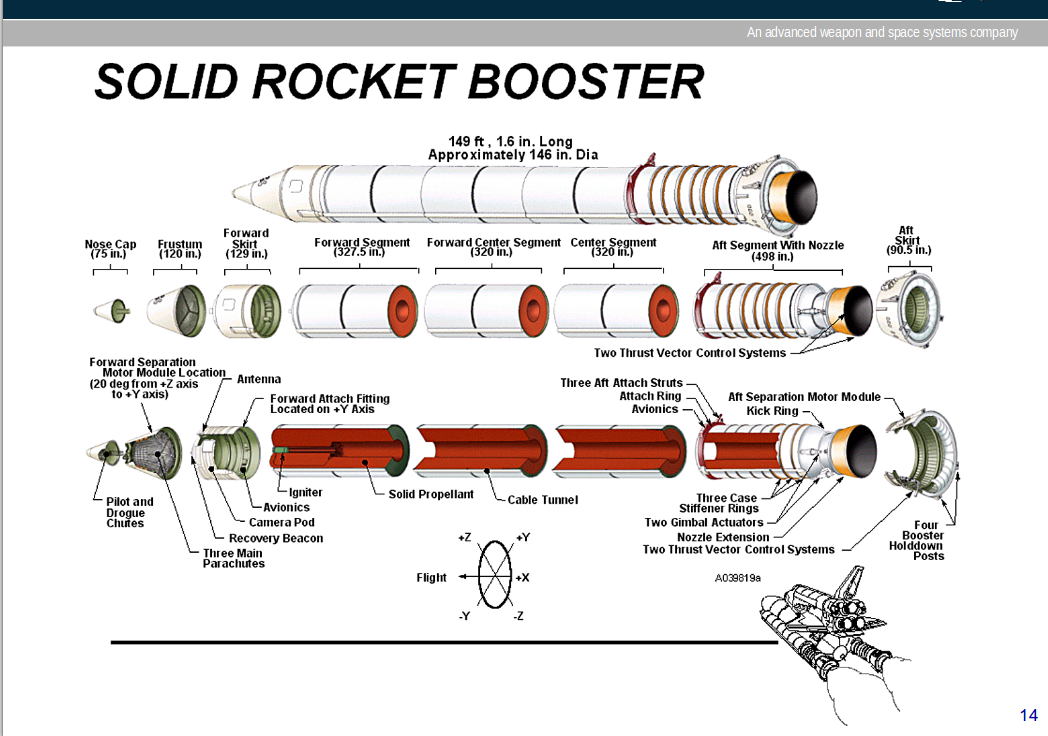 The igniter was quite a powerful solid motor itself IIRC. It was expendable of course, but replaceable.

Edit: Spurred on by Tristan's generous proffer of a picture he took of the Safe and Arm device in a JSC lab, I've written up a little more on this device.

Here's his picture (the igniter would be on the right): 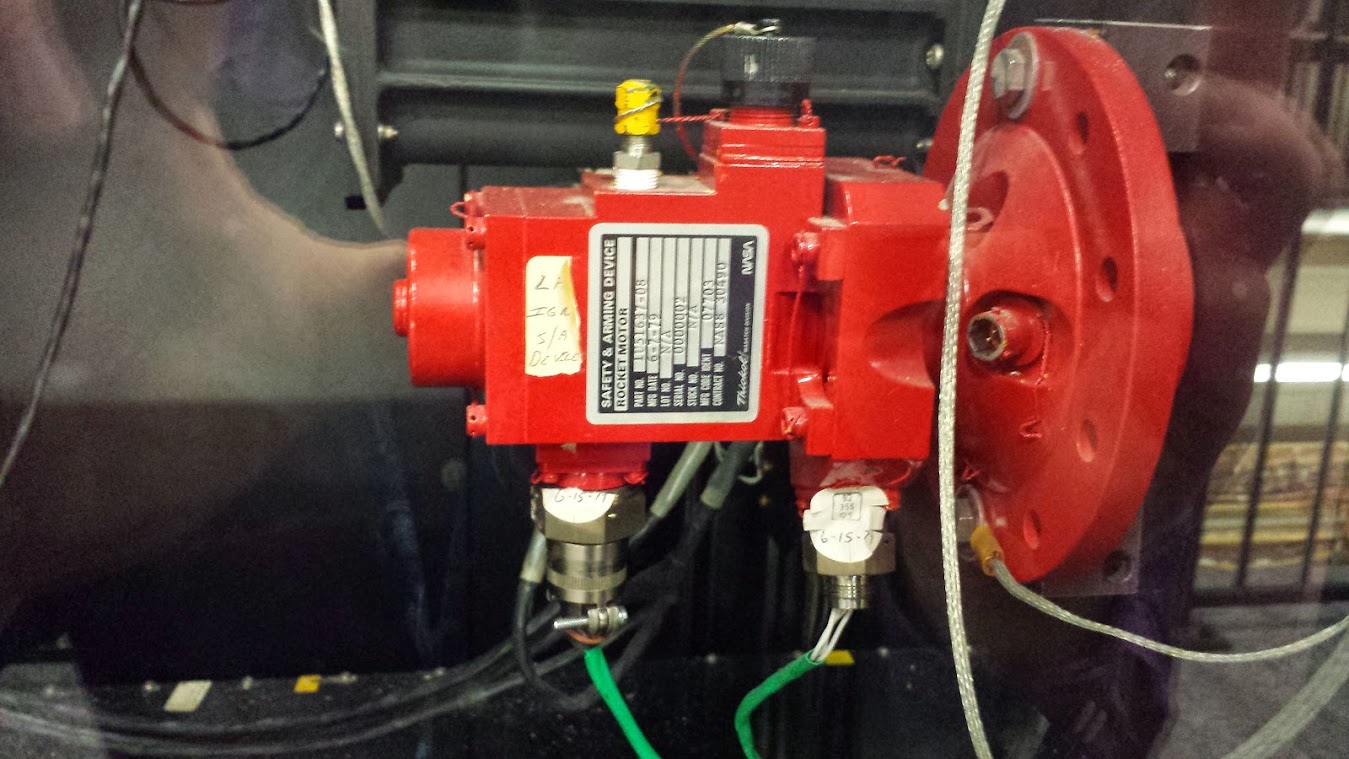 Here's a couple of schematics from the 1982 version of the Rockwell shuttle press manual.

From these you can see how the motor rotates the shaft of the mechanism so that the flame tunnels connect the NSDs (aka NSIs) with the charge in the device. And, how the safing pin prevents this from happening when installed.

Technicians removed the safing pins a couple of days before launch - this task required them to enter the forward skirt of the booster. It was part of the "Final Ordnance Installation and Connection" task in the countdown.

Example of when Final Ordnance Installation and Connection was performed

Not the answer you're looking for? Browse other questions tagged space-shuttle solid-fuel srb ignition or ask your own question.

11
Have SRBs or SSMEs ever launched without a space shuttle?
14
How many Solid Rocket Boosters were there in the Space Shuttle program?
47
Could the shuttle wait out the whole burn of SRBs on launchpad in case of a problem on launch?
14
Why didn't the space shuttle SRBs have wings and tires?
18
Why didn't the SRBs of the Space Shuttle use carbon instead of aluminium?
5
Did the shuttle SRBs have separation motors?
10
How were STS SRBs disassembled