What does "coord@10" mean exactly as a target for JPL's Horizons? How to access it?

According to this answer, using "coord@10" as a target code for JPL's Horizons represents the motion of a hypothetical location on the Sun's surface; presumably as a way to represent the rotation of the Sun's surface.

So far I have not been able to access "coord@10" as either a target, or an origin for a coordinate system.

I'd like to try this out to reproduce the explanation. How can I access this point using Horizons? 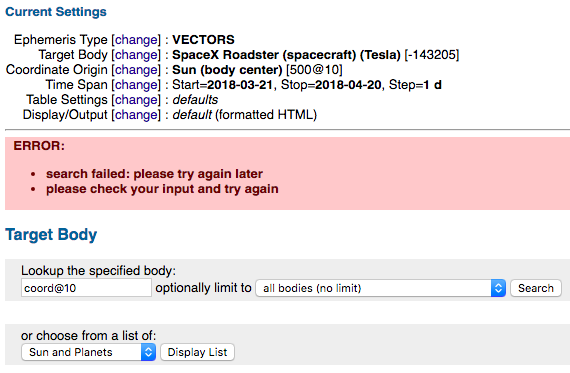 To select a point on the surface of a target body (limited to those with an IAU rotational model), use this form (units are degrees and km):

So the 10 is the body id for the sun, and you can type coordinates before the @ sign.

The Coord@ comes in to play when you are getting the values to run a query not using the web interface. It also seems they have upgraded the interface a fair bit since I used it first. In Vector mode, you could not set the SSB as an option for the center, or at least, it never seemed to work when I attempted it. I think it also pre-filled in the coordinates when I first used it, although it is hard to know what a website did in the past, especially one that saves the last query you did. It is possible that this was also set because I searched for a target from the list of cities, which might have pre-populated the observational location. If you have the coordinate filled out for the object type, and look at the "Batch" mode configuration, which was my starting point, you get the following:

The coord@10 is the coord@ I was referring to. By looking in to the documentation, and taking advantage of updates they seem to have made since I first was playing with the interface, I discovered I have much better results without the "coord" in the center, as it won't track a point on the sun, but rather the center of the sun.

33
Why does this plot show Starman's speed relative to the Sun fluctuating so often?

18
Is this what station keeping maneuvers look like, or just glitches in data? (SOHO via Horizons)
2
Why does this site show Starman's position so far from what Horizons gives?
3
What happened to time in 1962? (JPL Horizons changes displayed time from UT1 to UTC for dates starting in 1962)
4
Does JPL's Horizons have better MU69 state vectors for the New Horizons flyby somewhere?
3
Why are JPL using this expression to emulate Schwarzschild orbits?
2
What time is NASA using for Horizons web output?
1
How to find instantaneous mass of a central body that results in a given osculating orbit?
2
Is it posible to convert JPL Horizons Vectors to ECEF?