Why paint only one-half of Bennu?

The Gizmodo article Instead of Nuking an Asteroid Headed Toward Earth, We Could Just Splash It With Paint says:

“Even just painting the surface a different color on one half would change the thermal properties and change its orbit,” Michael Moreau, NASA’s OSIRIS-REx Flight Dynamics System Manager, told Gizmodo. That would involve literally sending a spacecraft to somehow change the color of some of the asteroid. (emphasis added)

Given the 120 years or so we’ve got and the amount of distance Bennu has left to travel before its nearby approach, if scientists could make some of it more susceptible to the solar radiation, that would slightly alter its path enough that it would miss us. Doing so would require changing part of its surface so it absorbs more radiation—for example, by covering one side of it with paint. Scientists first need to better study its orbit around the sun to determine the best course of action. (emphasis added)

Painting all of it would immediately increase decrease the magnitude of the average radial force it experiences from the Sun by roughly doubling the radiation pressure, altering its semi-major axis, period, and eccentricity by a small but well-defined amount. This is because both gravity and radiation pressure scale as $1/r^2$.

What is the physics behind choosing to paint only one half of the asteroid 101955 Bennu as mentioned twice in the article, rather than all of it? Would this be in any way better than painting all of it?

Quantitatively please, would painting half of Bennu be more effective than painting all of it in terms of it's potential Earth encounter in 2135? Or is this just to save on "space paint"?

TLDR: It's not that painting half is optimum, it's that it's sufficient; you don't need more.

We know an amazing amount about 101955 Bennu and its orbit. D.S.Lauretta et al summarize this in their 2015 paper "The OSIRIS-REx target asteroid (101955) Bennu: Constraints on its physical,geological, and dynamical nature from astronomical observations" which includes this about the non-gravitational influence on it's existing orbit:

The Yarkovsky effect was found to be the most significant nongravitational acceleration acting to alter the asteroid’s orbit (Chesley et al. 2014). The Yarkovsky effect is a nongravitational thermal force that results from the way the asteroid rotation affects Bennu’s surface-temperature distribution. The absorption of sunlight, and its anisotropic thermal re-emission, can cause a small thrust (Chesley et al. 2003;Bottke et al. 2006). When thermal forces align with orbital velocity vectors, the Yarkovsky effect produces a steady drift in semimajor axis. Measurement of the Yarkovsky acceleration for Bennu is possible because we have obtained three precise series of radar ranging position measurements over a 12 yr period (ten orbits of Bennu around the Sun). The Yarkovsky effect produces a mean rate of change of Bennu’s semimajor axis of $-1.90(\pm0.01) \times 10^{-3} \rm{AU \: Myr}^{-1}$. Since first being observed in 1999, Bennu has drifted over 160 km as a result of this acceleration

So we have an measurement of the oft-discussed Yarkovsky effect on this asteroid. The effect is an force, hence acceleration, that depends a bit on distance from the Sun, but we can average that over each (slowly changing orbit). Note the displacement due to a constant acceleration grows quadratically with time: remember $d = 1/2 a t^2$?

The year 2135 pass is interesting because it's close enough to the Earth (0.003 AU) that Bennu's trajectory will be changed significantly. Depending on exactly how it's changed, that can bring Bennu into contact with Earth later on. Steven Chesley et al's 2014 paper "Orbit and Bulk Density of the OSIRIS-REx Target Asteroid (101955) Bennu" looks at this in great detail, identifying a large number of small "keyholes" that, if hit, will cause a later collision: 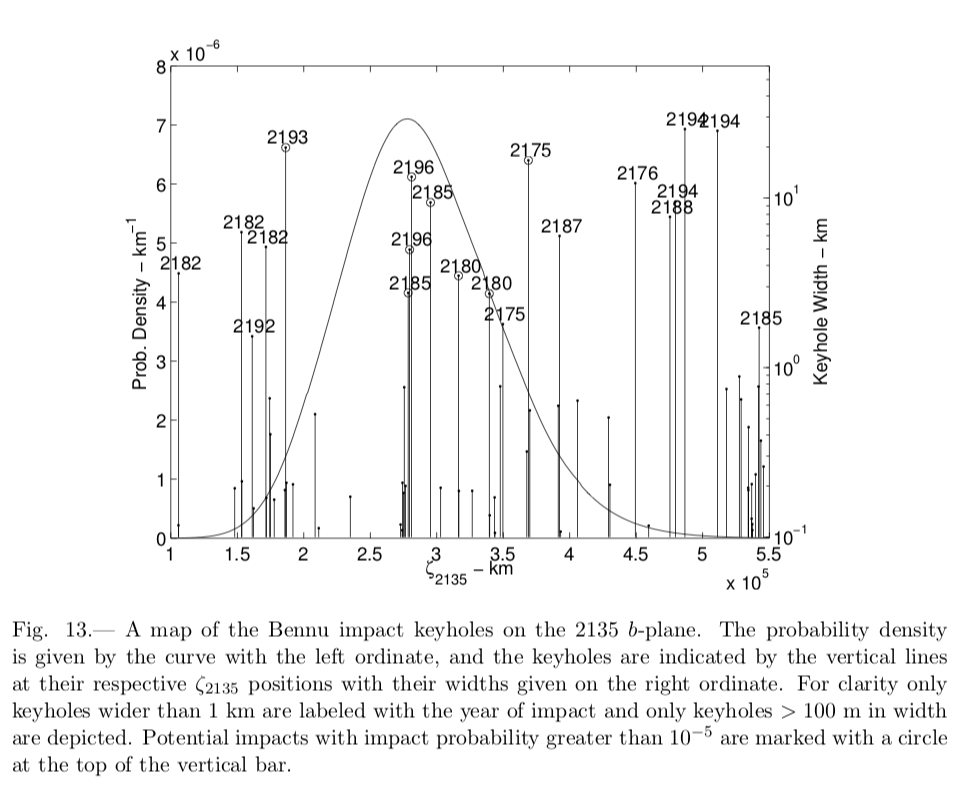 There are a lot of them, but they're all very very small compared to the 6,000km deflection due to the Yarkovsky effect. Note that zero isn't on the axis: Bennu isn't now aimed at any of them. The 2182 window is the closest, and the next one is 50,000km (note scale of figure) away.

If we had sufficiently accurate information, and determined that Bennu was headed for one of the keyholes, even a 20% change in the Yarkovsky effect would allow us to prevent a (much later) collision with Earth.

I think Moreau is aware of the size of the Yarkovsky effect, and realizes that only a (comparatively) small modification of it would be sufficient. So the "only .. half" is an expression of "we don't have to cover the whole thing 100% using a fine brush, we just have to modify the surface somewhat"

More detail on the orbital dynamics: The Yarkovsky effect in a specific case depends on the rotation of the asteroid. For a retrograde rotating (yes, we really know a lot about Bennu) asteroid, you can think of it as propulsive along the tangent to the orbit but against the motion. That's slowly lowering the orbit, lowering the semi-major axis by about $284 \pm 1.5 \rm{m/yr}$ (Chesley; note the sign should be negative in several places): If the Yarkovsky effect is increased, Bennu will be lower when it intersects Earth, closer to the Sun, though not necessarily closer to Earth. In the process, it's also changing the orbital period: this can add up over many orbits (many years) to make a much larger difference in position, which corresponds to a difference in arrive time at a point.

When working out whether a particular event, e.g. a keyhole passing, happens you have to consider both position and passage time. Chesley discusses this on page 17:

Table 5 details the effect of various differing models on the b-plane coordinates $(\xi_{2135},\zeta_{2135})$ of the close approach at the last reliably predicted Earth encounter for Bennu, which takes place in 2135. The b-plane is oriented normal to the inbound hyperbolic approach asymptote and is frequently used in encounter analysis. The (ξ,ζ) coordinates on the b-plane are oriented such that the projected heliocentric velocity of the planet is coincident with the −ζ-axis. In this frame the ζ coordinate indicates how much the asteroid is early (ζ < 0) or late (ζ > 0) for the minimum possible distance encounter. In absolute value, the ξ coordinate reveals the so-called Minimum Orbital Intersection Distance (MOID), which is the minimum possible encounter distance that the asteroid can attain assuming only changes to the timing of the asteroid encounter. For a more extensive discussion of these coordinates see Valsecchi et al. (2003) and references therein.

(Table continues in original paper with lots of rows for other really interesting effects, too) Comparing the $\Delta \xi$ value of a few tens of km and the $\Delta \zeta$ value of thousands of km shows that the largest effect is the delay: The Yarkovsky effects makes Bennu arrive late.

And that's why the horizontal axis of Fig 5 above is in terms of $\zeta_{2135}$; that's the delay that would change if you've changed the size of Bennu's Yarkovsky effect.

Either "white" or "black" paint would modify the size of the Yarkovsky effect on Bennu's orbit. From Lauretta et al:

It's easier to raise a 4% albedo (with white paint) than to lower it (with black paint). But there's more to the question than that, because different paints require different amounts of mass to achieve coverage, have different procedures for application, etc. Both lighter and darker pigments have been studied: for example, S Ge and Hyland studied both carbon black (dark) and TiO2 (white). (See also Shen Ge thesis) Dark pigments tend to be more effective per kg of paint, but I don't think there's a complete understanding of all the alternatives. Research is continuing.

Which is better for avoiding a collision, more or less Yarkovsky effects?

It's important to note that right now, the answer is "neither". As far as we know, Bennu is not colliding with Earth in the next couple centuries. But we might be wrong: Extrapolating motion for that long is hard (take another look at the list of effects in Figure 5 of Lauretta et al). We could have it wrong. So at some time in the future, we might discover that Bennu is headed for Earth.

Most likely, that (eventual) collision will follow on an earlier Earth interaction that diverted Bennu to the collision. That's one of the keyholes mentioned above. In some sense, that makes the diversion problem simpler, but the extrapolation problem harder.

The diversion problem is simpler because a keyhole is much smaller than Earth. Typically a few km to maybe a couple hundred km wide, it takes much less of a change in orbit to miss one that to miss Earth. (You have a bit less time, due to the keyhole interaction being earlier, but generally the ratio of sizes is more important).

But note that if you modify the asteroid, you modify the path before and after the keyhole encounter: Worst case, you can miss the keyhole, but the asteroid will take a different path that now results in a different collision, and you've got to do the whole thing again with either more or less (!!) time to pull it off. Being able to predict those new paths accurately is very important.

So the mission planning is hard. We're getting better at predicting orbits (and asteroid perturbations), which is good. We have a bit of time AFAIK. And when we find that we really do need to modify an orbit to avoid a collision, that modification might involve either more or less Yarkovsky acceleration, so we might be sending out for either white or black paint.

The goal for painting the surface of the asteroid is not only to change the solar radiation pressure acting on the surface. The more likely reason is to alter the Yarkovsky effect on the asteroid (https://en.wikipedia.org/wiki/Yarkovsky_effect).

Interesting trivia: The mission Osiris-Rex will study this effect on Bennu.

You can read more on the concept in this Master's thesis: https://oaktrust.library.tamu.edu/bitstream/handle/1969.1/ETD-TAMU-2011-08-10184/GE-THESIS.pdf?sequence=2&isAllowed=y

There is a strong economic reason to paint only one-half of Bennu.

One kg of paint could cover not much more than 20 m$^2$ surface area of Bennu, not taking into account the difficulty to cover the regolith.

This means a difference in mass of more than 18,000 kg of paint between covering one-half or the whole surface of Bennu.

It will be clear that, comparing with the nearly 4000 kg of the MSL spacecraft, at least 4 more spacecrafts would be required to carry the paint needed to cover the whole of Benno, above the initial 4 to cover "only" one-half.

Not the answer you're looking for? Browse other questions tagged asteroid or ask your own question.

2
How much will Bennu rotate faster and faster with mirrors facing the Sun on its left side?
1
Would the Yarkovsky effect ever be faster than a solar sail from a 1 AU orbit to the Sun?