Could a satellite levitate above the magenetic fields of Earth?

Like the toy the base of the levitation could the Earth be the base and the space station the levitron? 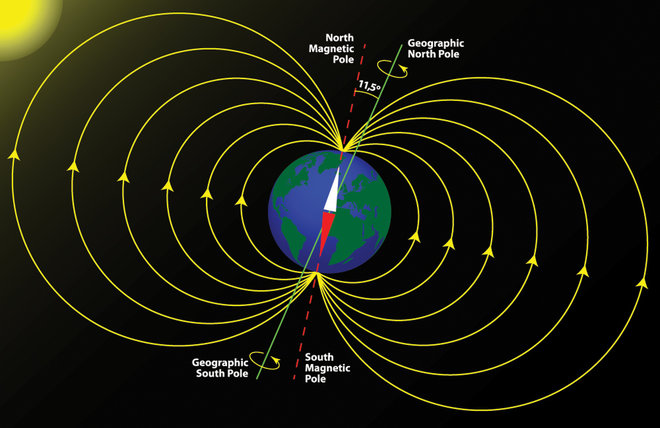 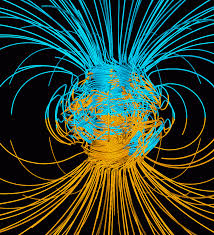 Is there a place where the Earth's gravity well is present but the electromagnetic field strong enough to allow a object to stay suspended in Earth's magnetic field like a levitron?

The basic calculation we need is set out here. The force that would need to counteract gravity is given by equation 17 $f = \nabla(\mu.B)$ where $\mu$ is the dipole moment of the magnet and $B$ the Earth's magnetic field. Now a good neodymium permanent magnet has a moment equal to its volume times about 875 $kA/m$ (as discussed here) and a density of 7400 $kg/m^3$ so a specific magnetic moment of very roughly 100 $A/kg m$. Since the Earth's magnetic field is roughly a $10^{-4} T$ dipole at the surface, and the strength of a dipole drops as $1/r^3$ the gradient will drop as $1/r^4$ and so be something like $B/r$, so it will be very roughly $10^{-13} T/m$. So the force on each kilogram of magnet is something like $10^{-11} N$, about one part in a million million of the gravitational force.

So lets consider instead a superconducting magnet. It seems the critical current density of niobium film is about $10^{11} A/m^2$ while the magnetic dipole moment of a current loop is $2IS$ where $S$ is the area and $I$ the current, so a loop of niobium wire of radius $R$ and cross-sectional area $a$ could carry a current of about $10^{11} a$ amps and a would have a dipole moment of about $10^{12} a R^2$. Its density is about 8500 $kg/m^3$ so its mass is about $10^4 a R$. The magnetic force on it, from the above calculation, will be about $0.1 a R^2$ so we find that $R$ needs to be about $10^5 g$ or about a million meters. So the loop is nearly as large as the Earth. The loop would also need to be strong enough to hold the "pressure" of the magnetic field within it. I can't find numbers for that, but I'm pretty sure you'd need something a lot stronger than niobium.

A secondary problem, as already pointed out in another answer, is that Earth's magnetic field does not provide a stable minimum where the magnet could sit, so it might experience lift, but would need active stabilisation.

There are several differences between the laboratory example and the situation on Earth.

The magnet shown in the example is not a dipole. It is a large, ring shaped magnet with the height of the levitated object above it roughly equal to the diameter of the ring. It is not anything like the shape of the Earth's field or the field of a dipole. It has a convenient local minimum in the transverse plane.

Also, the large drawing of the Earth's field shown in your question (https://i.stack.imgur.com/zsz9D.jpg) is wrong and completely unrealistic. It does not show the correct shape of a dipole field or the field of the Earth.

I'll add a plot and a quantitative analysis in a few minutes er, hours...

Not the answer you're looking for? Browse other questions tagged artificial-satellite spacecraft gravity rotation or ask your own question.

19
How deep is the force well of L4 and L5 Lagrangian Points of Earth-Sun set?
16
Can magnets be used to launch spacecraft?
40
Does a satellite naturally turn in phase with its orbit, always facing Earth?
4
Do meteor showers from 209P/LINEAR cometary debris pose a threat to the ISS and other Earth-orbiting satellites?
11
How can just making the ground broadcast stronger neutralize a zombie(sat)?
2
Height of navigation satellites above Earth
2
Accelerating spaceships via planetary magnetic fields
2
Rapid deployment of cubesat network with Gauss cannons
0
Could a spacecraft be propelled by the deflection of a very high number of charged particles?