What is Falcon heavy's payload capacity to Trans-Lunar Injection

According to the SpaceX website (http://www.spacex.com/falcon-heavy) the falcon Heavy can carry 16.8 tons to Trans Mars Injection (TMI) and 26.7 tons to Geostationary Transfer Orbit (GTO). How much can it carry to Trans-Lunar Injection (TLI)?

One can use the NASA Performance Vehicle Estimator to get a decent idea of this, although it does have errors now with the Falcon Heavy. It does not have a TLI option, but it does have a negative C3.

To calculate the C3 required, one must know the delta V from LEO to Escape Velocity and to TLI. The escape velocity is requires a delta v of 3.22 km/s, the TLI for Apollo was between 3.08-3.25 km/s. Bottom line is, the delta v is roughly equivalent to escape velocity, so let's just use that. The mass is 6,000 kg with the recoverable Falcon Heavy, and 12,000 kg for the expendable. 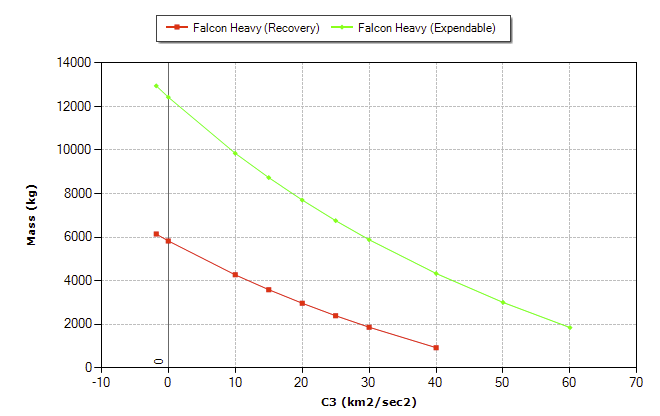 All of this taken in to account, and trusting SpaceX's numbers, let's say about 2/3rds of the way between the two measurements, as that is where it falls on the C3 curve. Thus it should be about 23.4 tons, give or take.

Therefore we know the TLI payload of Falcon Heavy is at least 16,800kg, but no more than 26,700kg. It is probably around 21,000kg*, but due to the nonlinear nature of rocket delta-v, that could be off by a couple tons.

*This value is between the results of a logarithmic fit of the delta-v/payload data for 3.25 km/s TLI and 3.05 km/s TLI

Say 20,000 kilograms and using a SpaceX state of the art mission capsule and I fail to see the problem with TLI plus flight return for the falcon heavy.

Just replace the kerolox boosters with SRBs and still maintain full re-usability. Just because the capsule is human rated doesn't mean you have to use an actual human for the test flight...not that there would be a shortage of volunteers!

Anyhow the entire system is now proven as human rated for all the little hops to the ISS and back.

Tired of all the Government sandbagging on this at this point and especially with Falcon Super Heavy ready for flight checkouts imminently this Year 2021 on or about June at the moment..

Not the answer you're looking for? Browse other questions tagged spacex falcon-heavy payload or ask your own question.

11
How much lighter could a modern, working replica of an Apollo payload and crew be at launch?
7
What would be reasonable payload capacities of Falcon Super Heavy to various reference orbits

9
Why are there such large differences in launcher payloads to higher orbits (GEO, Lunar) compared to LEO?
5
How much fuel can Falcon 9's upper stage bring to orbit, without any other payload?
14
Why can Falcon Heavy bring 4.2 times as much mass to Mars than F9, but only 2.7 times as much to LEO?
76
Is the SpaceX Falcon Heavy payload (a Tesla car) space junk?
8
How much payload can Falcon Heavy Reusable lift?
17
Why can't Falcon Heavy accelerate deep space payloads as fast as Atlas V and Delta Heavy?
7
What would be reasonable payload capacities of Falcon Super Heavy to various reference orbits
1
What is the maxium weight the falcon heavy can take to mars
3
What is meant by “a high-energy geostationary orbit”? (SpaceX Arabsat 6A)