What makes exhaust from aluminum-based SRB propellant so bright?

The brightness and color of the extremely bright light produced by the Space Shuttle SRB's is discussed in this answer and in comments below it, though the main subject there is the dim blue light produced by LOX/LH2.

What physical process produces the radiation that makes the Shuttle's SRB exhaust so incredibly bright? Is it still blackbody radiation from particles, though they are partly aluminum based now, or is it more due to luminescence from other molecules in the exhaust?

Does the oxidant for the aluminum contain oxygen? Are there glass "soot" particles in the exhaust?

Or is there just a lot of carbon-based soot that's also produced, but the bump in temperature from the aluminum oxidation makes it so much hotter that it's so much brighter?

There is some related discussion at the question How do rocket propellant combinations rank in terms of “brightness”? as well, which currently has no accepted answer. 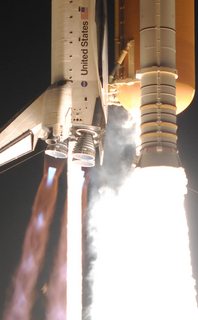 Browse other questions tagged srb exhaust or ask your own question.

48
What impact will the deorbiting of thousands of satellites have on the atmosphere?
10
What is the cause of the blue light from LH2/LOX rocket engines?
8
Why is the ring of exhaust gas immediately below the F1 nozzle so dark?
10
How do rocket propellant combinations rank in terms of “brightness”?
2
Exhaust plume length variation across different rocket types

9
In space, how far from the nozzle is the exhaust from a space-craft capable of causing damage?
6
Is it unusual to vector the thrust from an SRB?
10
What is the cause of the blue light from LH2/LOX rocket engines?
12
Why do the shapes of these two exhaust plumes from an Atlas V 411 look different?
4
What is the 'Summerfield criterion' regarding rocket exhaust expansion
16
Were the Space Shuttle's Main Engines ever off while the Solid Rocket Boosters were firing?
8
What is the velocity distribution of the exhaust for a typical rocket engine?
11
What are these circular spots on these Ariane V SRB nozzles?
18
Challenger hypothetical - what if the SRB breach faced outboard?