What is Astronaut Sunita Williams wearing on their wrist?

She's continued her career in space on Earth as a member of NASA's Commercial Crew Transportation Capability (CCtCap), a group of veteran astronauts that works with privately-held companies like SpaceX and Boeing to develop spacecrafts.

Part of her job is to verify that the companies' spacecraft can launch, maneuver in orbit and dock to stationary spacecraft like the ISS. NASA announced the CCtCap in 2015 as part of "the Obama Administration's plan to partner with U.S. industry to transport astronauts to space, create good-paying American jobs and end the nation's sole reliance on Russia for space travel."

"This is really different from my old job, you know," Williams said. When she became an astronaut, the shuttle was already laid out. "It was all documented and out there, and [I] went through classes to understand all the systems," she said. "The plan was there, and you had to get this, this and this done before you could go fly out in space."

The space machinery of private companies that Williams now supports are still works-in-progress. "They don't really have training systems established for them yet," she said. "We're sort of creating that right now with the folks at the companies." That means deciding what things are important for astronauts to know — "classic things like getting in your seat, reach[ing] all the controls," she said. "We're establishing all that with the companies right now." Her contributions have helped to build the Boeing CST-100 Starliner and SpaceX Dragon.

The photo shown in the article is also shown below. On their left wrist are two devices. One is obviously a watch, the other looks more specialized and non-commercial.

Question(s): What is it? What does it do? What's inside it? Who made it?

I thought it might be one of the ISS' portable CO2 monitor but those look different (see below), and the ISS' personal dosimeters are supposedly USB-stick-shaped for easy readout.

It looks like an electronic key for a car, but everyone knows there are no cars in orbit! Well, not anymore at least ;-) https://www.whereisroadster.com/ 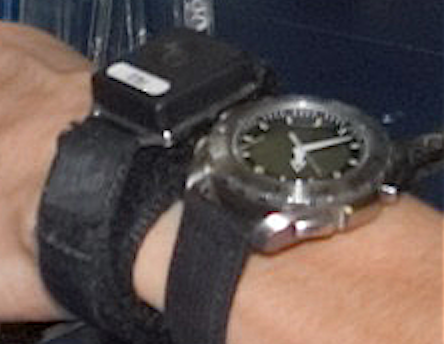 above: cropped, zoomed, sharpened from below. 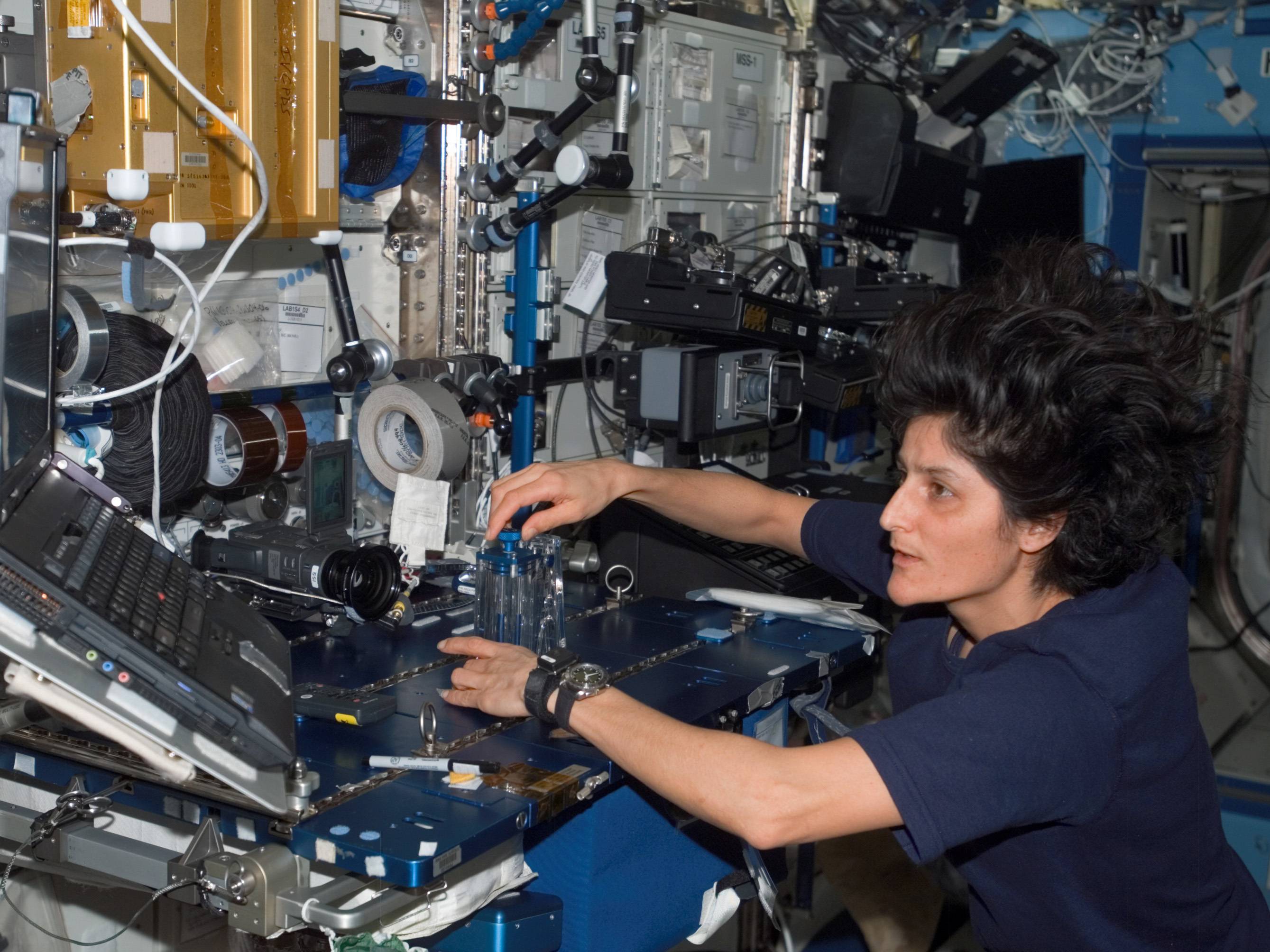 below: Portable CO2 meter for the ISS, from here, looks very different. Per this answer, the image is that of astronaut and molecular biologist Dr. Kathleen "Kate" Rubins (Ph.D.), the first person to sequence DNA in space. 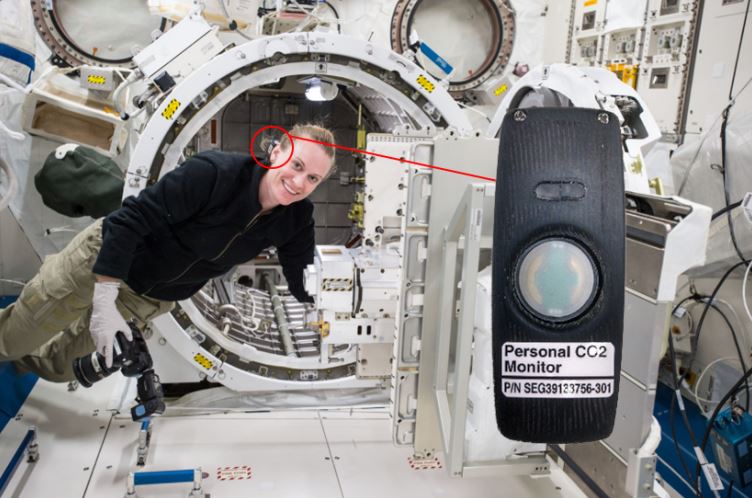 That's an Actiwatch Spectrum, used in the Sleep-Wake Actigraphy experiment. 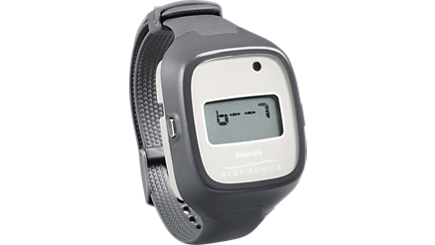 It's a commercial product made by Philips. The one in the picture appears to have a cover over its display. I don't know if this is an option or a special NASA mod. Or perhaps it's an older model. There is a lengthy writeup on the device at this NASA page which states that it is "modified" but sadly gives no details on how, nor a picture.

Crews on space missions frequently report fatigue, and studies show crew members experience circadian misalignment and sleep deficiency during spaceflight. Inadequate sleep could impair a crew member's ability to remain alert while operating complicated equipment. Results from the Sleep ISS-12 investigation are expected to improve understanding of how long-duration space flight affects sleep-wake cycles. Data from wrist-worn light and activity sensors determine how much crew members sleep in space, and how much light they are exposed to throughout the mission. Crew members also evaluate their own sleep quality and alertness. The results of the investigation are expected to help define light requirements, sleep-shifting protocols, and workload plans for future exploration missions, and may also help to determine whether additional sleep-disruption countermeasures are necessary to improve crew alertness and reduce fatigue.

This link is quora points to some clue about what this watch is. First answers says it is a timer used for getting mission elapsed time. Which seems unlikely as their is no visible display in the watch. And astronauts would likely prefer using watches with built in timer for such purposes than having two watches I think.

The other answer says it is some wearable tech that measures light and no light conditions ( for sleep and no sleep time? ) And hand movements then it is correlated with ground measurements to get some approximation of how good/restful sleep an astronaut had. This is all part of SLEEP experiment( couldnt find link for such experiment) as pointed out by the first link.

I think it may also have other sensors such as heart rate measurement for better health tracking( do astronaut in ISS wear some other health monitoring device all the time? Like in apollo missions? )

16
Do ISS astronauts notice, or experience symptoms of elevated CO2 levels? Do they wear monitors regularly?
8
"UK schoolboy corrects Nasa data error" - what precisely was the "error"?
3
Who is the unnamed astronaut in this uncredited photo used in commercial promotional material?

21
Do astronauts aboard the International Space Station (ISS) actually use their legs?
19
Was Valentina Tereshkova pregnant while in space?
10
Who is the space artist? Patterns on the Spheres robots on the ISS
9
Can astronauts wear eyeglasses inside their helmets during launches and landings?
15
Why are these astronauts green?
16
Do ISS astronauts notice, or experience symptoms of elevated CO2 levels? Do they wear monitors regularly?
3
Who is the unnamed astronaut in this uncredited photo used in commercial promotional material?
13
What is Earthy controlling in the ISS cupola?
3
Do standard procedures for securing the ISS before an orbital boost burn include making sure that at least large objects are securely "strapped down"?