Why is Curiosity not heading for Peace Vallis?

For over 5 years Curiosity has been successfully searching for many signs that water was once present at Gale crater. Its geology is notable for containing both clays and sulfate minerals that may preserve signs of past life. An unusual feature of Gale is an enormous mound of "sedimentary debris" around its central peak that is composed of layered material This mound may have been laid down over a period of 2 billion years, billions of years ago and is of particulary interest.

But now that the surroundihgs of the peak have been investigated for so much longer than was expected before, isn't it time to look for signs of past life elsewhere ?

At the image below, with the landing site of Curiosity we can see there has been substantial waterflow from the rim of the crater through the Peace Vallis outflow channel into the plain. An alluvial fan is drawn at the image that could be much "younger" than the "debris" that is already been so thoroughly investigated.

Opportunity is allowed to explore "Perseverance Valley" on the west rim of Endeavour Crater!

So, why not turn the wheels and head for Peace Vallis? 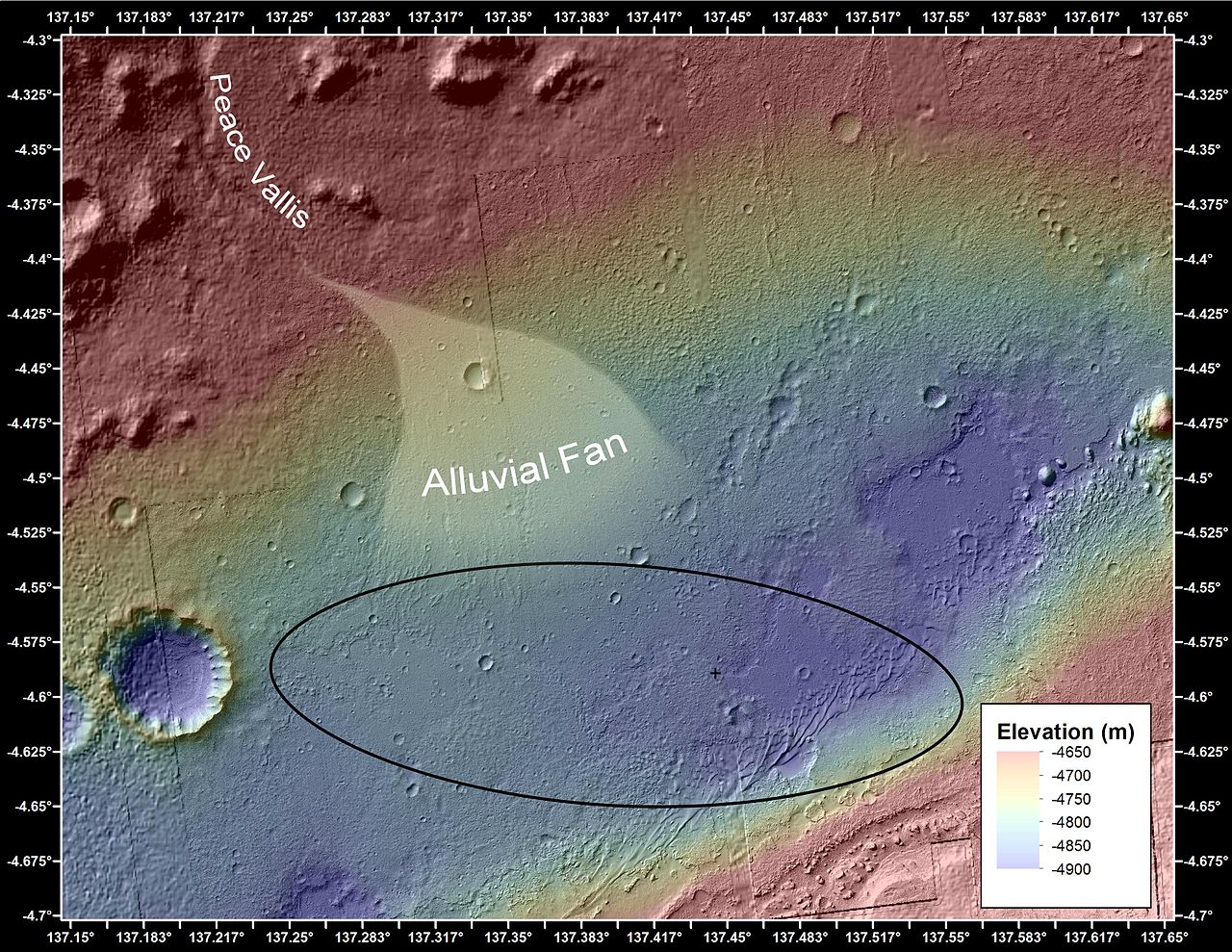 It is actually too likely to find water there. There are 3 categories of Planetary Protection missions for a mission to Mars, IVa, IVb, and IVc. Curiosity meets the IVa criteria, a mission not intended to seek life on Mars. A IVb mission looks for life, and a IVc enters a special region which is:

A special region is a region classified by COSPAR where terrestrial organisms could readily propagate, or thought to have a high potential for existence of Martian life forms. This is understood to apply to any region on Mars where liquid water occurs, or can occasionally occur, based on the current understanding of requirements for life.

The definition has also been further clarified. The basic intent seems to be regions that could have water, and are above freezing. An area with alluvial fans certainly might have water, and the region does not freeze, thus a IVc mission would be required to visit such areas more closely, of which Curiosity is not.

One particular thing of attention was the occurrence of Recurring Slope Lineae only a few km away from Curiosity. The current path has Curiosity getting close to, but not too close to, these areas where there might be liquid water. Planetary Protection was a prime suspect at first, but it has been loosened at least slightly.

It might be that by the time Curiosity has scaled Mount Sharp they will consider other targets, and it might be deemed a target that is worthy of approaching closer. But Planetary Protection is a huge concern for the Curiosity team, now more so then ever.

Not the answer you're looking for? Browse other questions tagged mars life curiosity geology planetary-protection or ask your own question.

15
Why aren't there any robotic missions on Europa or Enceladus?
4
Are not crash landings on Mars violating the Planetary Protection rules?
5
Is there any life from Earth that can live on Mars?
5
Are Peace Vallis and it's alluvial fan on Mars classified as special regions or not?

13
Does NASA have any plans for future Mars rovers after Curiosity?
33
Why would NASA include a speaker on Curiosity?
8
Cost Breakdown for Curiosity Development
4
How does Curiosity analyse Mars' rocks for finding signs of life?
15
Does the Curiosity rover really have a chance of driving to the top of Mt. Sharp?
5
Is Curiosity allowed to investigate the subsurface of the "clay unit " near Mount Sharp?
6
Why is Curiosity remaining on the Vera Rubin Ridge for so long?
8
Why not a "live" visual connection with Curiosity on Mars all the time?
7
Gravel on Curiosity Rover?
6
Why did Curiosity not have a camera on board to record the landing?