Why would NOAA restrict the ability of SpaceX to live stream the second stage?

I was watching the live stream of the Iridium-5 launch and they mentioned that NOAA had restricted their ability to live stream the second stage and that SpaceX was working to remove this restriction.

Is there any information why this restriction was added?

Because beaming down images of the earth from space is restricted, and Companies and Universities require a Commercial Remote Sensing Licence (weirdly these are issued by NOAA) to do so. SpaceX has not received one for streaming second stage imagery. You can see the list of issued licenses here (a fun read).

This was confirmed in this tweet by Eric Berger: 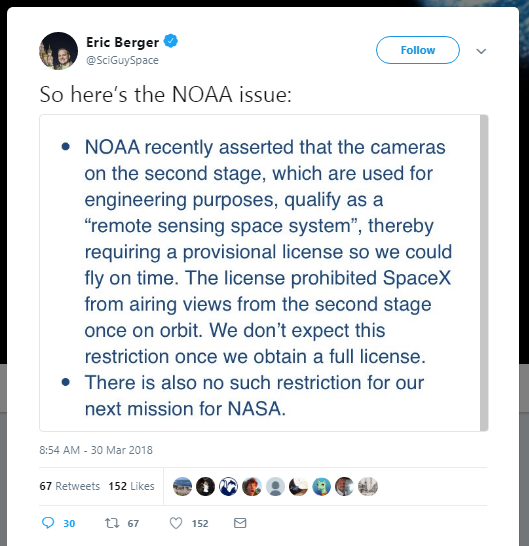 It is unlawful for any person who is subject to the jurisdiction or control of the United States, directly or through any subsidiary or affiliate to operate a private remote sensing space system without possession of a valid license issued under the Act and the regulations.

NOAA page on how to get a license under that act, etc, is here. A recent Wired article covers it pretty well.

NOAA's governing regulations limit the scope of its regulation: "For purposes of the regulations in this part, a licensed system consists of a finite number of satellites and associated facilities". That "satellites" term separately has a general definition that rules out anything not in a "permanent" orbit, alternately a "stable orbit", i.e. a launch vehicle. What might be new is that the Falcon 2nd stage does achieve a "stable orbit" for Iridium insertion, hence the signal cutoff.

And now NOAA has issued a statement that says they did put a restriction in place, but doesn't say why.

There is a lot of curiosity on that, but not a lot of real information. Let me look at a list of possible issues:

Not the answer you're looking for? Browse other questions tagged spacex falcon-9 noaa or ask your own question.

6
Has SpaceX applied for license to broadcast video from space?
6
Why does the NOAA require a permit to be issued to stream images of the earth?

10
Through what mechanisms would SpaceX test and examine the returned CRS-5 first stage?
5
When SpaceX hot fired the previously used ORBCOMM OG2 first stage, why did they suddenly switch from LC-39A to LC-40?
4
SpaceX second stage altitude decrease?
3
Why not use a rotorcraft drone or quadcopter using GPS navigation to live stream SpaceX booster landings on the droneship?
12
If the SpaceX drone ship's camera feed gets disrupted every landing, why cant they throw the antennae off the ship on a buoy for better reception?
6
Why does the NOAA require a permit to be issued to stream images of the earth?
8
Why did this fairing separation happen at such a high altitude? (SpaceX Iridium-6/GRACE-FO)
17
Why is the first stage from the Falcon 9 SES-12 mission not recovered?
6
Why does the F9 second stage roll back and forth during deployment of each RADARSAT satellite?
1
What is the semicircular puff coming from the Falcon 9 first stage in this picture?