What information exactly was necessary to determine and announce this “debris causing event”?

Question: Did this mean only that several new objects were detected and that back-tracking their trajectories lead to a convergence with WorldView-2 in both time and space, and this suggests that there may have been an event? Or does this classification require that there is some corroborating evidence of an event as well?

The Joint Space Operations Center issued a notification on Tuesday, reporting that WorldView-2 was involved in a debris-causing event with at least eight associated pieces being tracked. No orbital data was available for the debris, however, JSpOC is including preliminary orbit information in conjunction screenings for operational satellites.

Satellite operator DigitalGlobe acknowledged the JSpOC report via Twitter and said “WorldView-2 is currently operational and is performing standard maneuvering and imaging tasks.”

A few hours later, DigitalGlobe shared a satellite image of Oakland, California, taken by WorldView-2 at 21:34 UTC on Tuesday, after the debris event had taken place – reaffirming that the operation of the spacecraft has not been impacted.

DigitalGlobe has begun an investigation into what happened to the satellite. 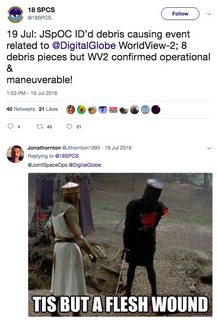 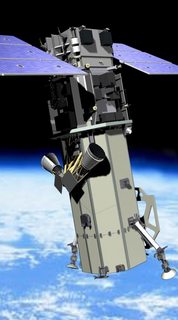 above left: Screenshot of tweet. above right: Illustration of Worldview-2 from Spaceflight101. both: click for full size.

Browse other questions tagged debris imaging impact or ask your own question.

8
What were the circumstances of this impact event on Jupiter in 2012?
12
What risk management options are available for Mars orbiters and rovers to mitigate threat of impacting with Siding Spring cometary debris?
7
What was the lifetime of the debris from the US Anti-satellite exercise for USA-193?
8
How was this image of the sun taken and what does it show?
6
What are the causes of breakups of spent 2nd and 3rd stages, resulting in orbital debris?
13
What was the earliest piece of debris to survive reentry?
3
What is happening in this photo of a glowing plume behind STS-70 and how was it taken?
14
How does the US's 2008 debris cloud compare to India's 2019 and China's 2007 contributions?
6
Where exactly on Mars was Curiosity when this image was taken?
2
Could ejecta from asteroid Bennu enter into temporary orbit around it? If so, how?