How to calculate a transfer orbit

I'm starting to study by myself orbital mechanics, but I don't understand well how can be calculated the transfer orbit. If I have for example a route Earth-Jupiter, how can I calculate it? I've read some books about it, but as I don't know when the spacecraft would reach Jupiter, I don't know the ∆t and therefore I cannot calculate anything of the Gauss problem. How can I approach this problem? I'm pretty new with this subject and I am not so familiar with it.

Thank you very much

There are a multitude of possible maneuvers and trajectories possible, but the one most used historically is the Hohmann transfer orbit.

Where it falls short

All of these are effects that make the 'vanilla' Hohmann transfer utterly unsuitable for real application. However what is used in reality is usually still similar to a Hohmann transfer. Depending on what you want to do it is still good enough for understanding a basic transfer, estimating a rough travel time or even simulating it in a model solar system (it is good enough in KSP for the most parts for example). Also some homework problems might specifically ask for this one, as it is the most common one.

Math for the Hohmann transfer 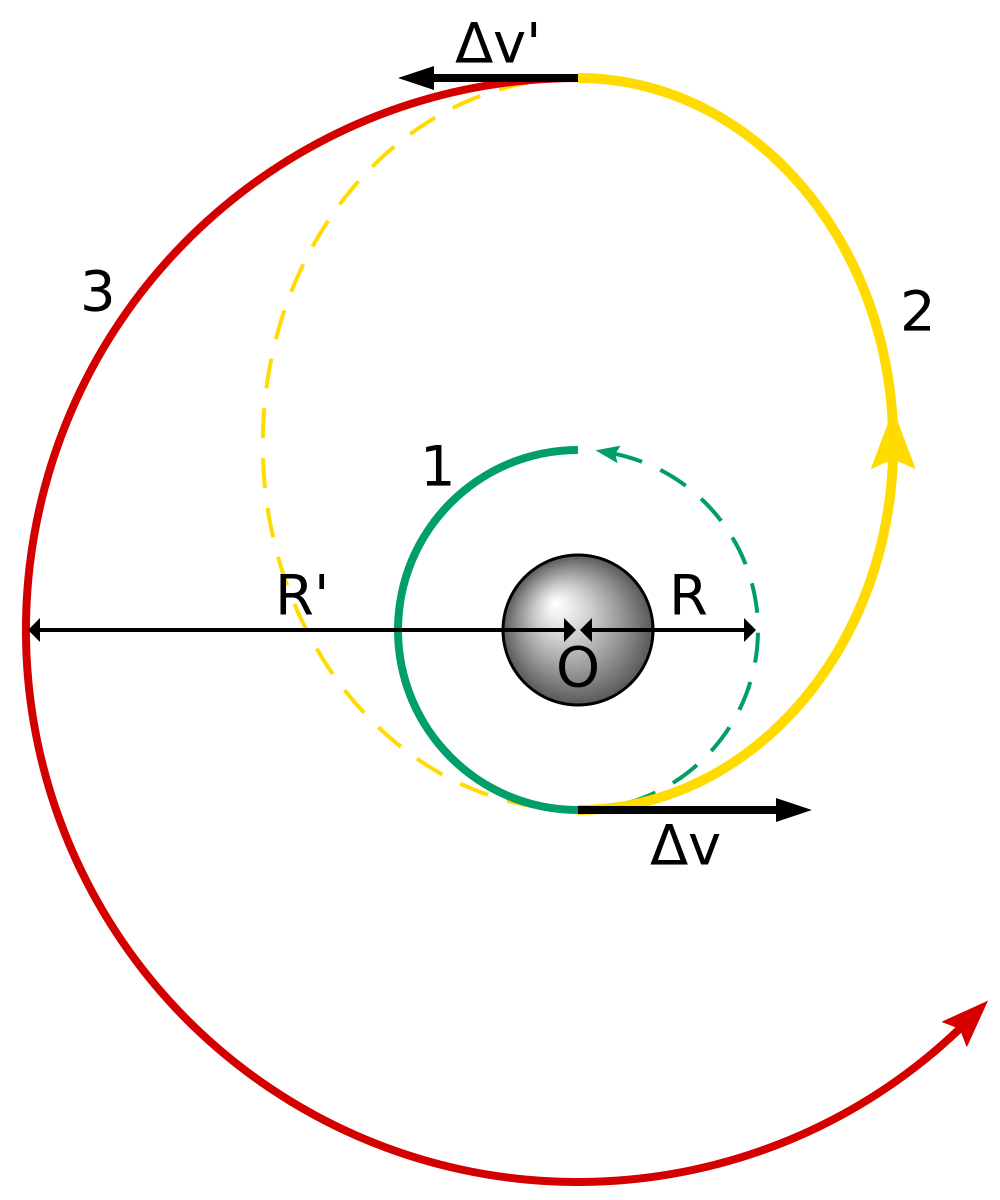 When starting from Earth (green orbit) and going to Jupiter (red orbit) you'd go into an elliptical transfer orbit (yellow), that touches both of them. Its semi major axis is

According to Kepler's third law the period for one entire orbit is thus:

Since you only go half the transfer:

Most transfers, especially to close bodies like Mars and Venus use a variation of the Hohmann transfer. When going further out (or in) you might use multiple gravity assists to save fuel, which however usually increase travel time. The MESSENGER probe to Mercury went through quite a lot

When going even further out you probably want to use less efficient maneuvers, which require more fuel both for escape from Earth and breaking at the other body (if you want to do that), but are a lot faster. New Horizons did that when traveling to Pluto, because otherwise it would have taken about 45 years.

I suggest you also play around with that on Wolfram Alpha like this, it is a quite powerful and easy to use tool!

Not the answer you're looking for? Browse other questions tagged orbital-mechanics orbit orbital-maneuver transfer-time or ask your own question.

29
Determining orbital position at a future point in time
2
Calculating true anomaly of a celestial object
12
Transfer between elliptical orbits
2
How to calculate the velocity vector components of a planet?
3
How do I calculate wait time to launch?
4
C3 calculation in interplanetary missions
2
How to calculate mass of fuel for Venus Orbiter
4
How do I calculate re-entry velocity when decaying from a circular orbit?
2
Issue with the Gauss problem for solving interplanetary trajectories