How does the microgravity environment on the ISS change how people interact or converse? Is it polite or common to be oriented the same direction as who you're talking to? Also, when you see new astronauts boarding the ISS and the others are waiting on the other side of the airlocks, typically every is in the same orientation. Is this pre-planned or more of a human instinct thing to align in the same direction as a group?

It's mostly the same as on Earth, with allowances/exceptions made for convenience and the fact that there's no gravity - it's a sometimes confusing combination of the two, with a clearly defined way to figure out up vs. down - if you take a moment to figure it out.

These quotes from astronauts are more convincing than my short answer.

How does the microgravity environment on the ISS change how people interact or converse?

Comments from NASA's ISS Science Officer Ed Lu on up vs. down:

"The interesting part about working inside the Progress (Russian expendable cargo spacecraft) is that there is no "up" or "down" direction inside. There really isn't an up or down anywhere else here, but there is a direction we think of as the floor and a direction we think of as the ceiling in each module. Most of the labeling on panels and equipment is written so that it is right side up assuming this orientation, and also most of the lights are on the "ceiling" so they cast light "downwards." To add to the effect, there is a simulator back on Earth we spent a lot of time in where we got used to one direction as the floor and the opposite direction as the ceiling. So up here, when Yuri and I say downwards or upwards, we mean the equivalent directions as in the training module on Earth.".

"The International Space Station US modules have a "location coding" system that helps to orient astronauts. The modules do have a defined floor and ceiling, known as "deck" and "overhead." Right and left take on the monikers of "starboard (right)" and "port (left)." If we move to the front of the ISS we are heading "forward;" flying back to the Russian end of the ISS is known as "aft." Very military you say? That's because a lot of our heritage comes from the military. Learning these standard orientations makes it easier for space fliers from all countries to adapt and understand everything from stowage locations to emergency egress (exit) instructions.".

Is it polite or common to be oriented the same direction as who you're talking to?

Astronauts can work side by side in the same orientation, 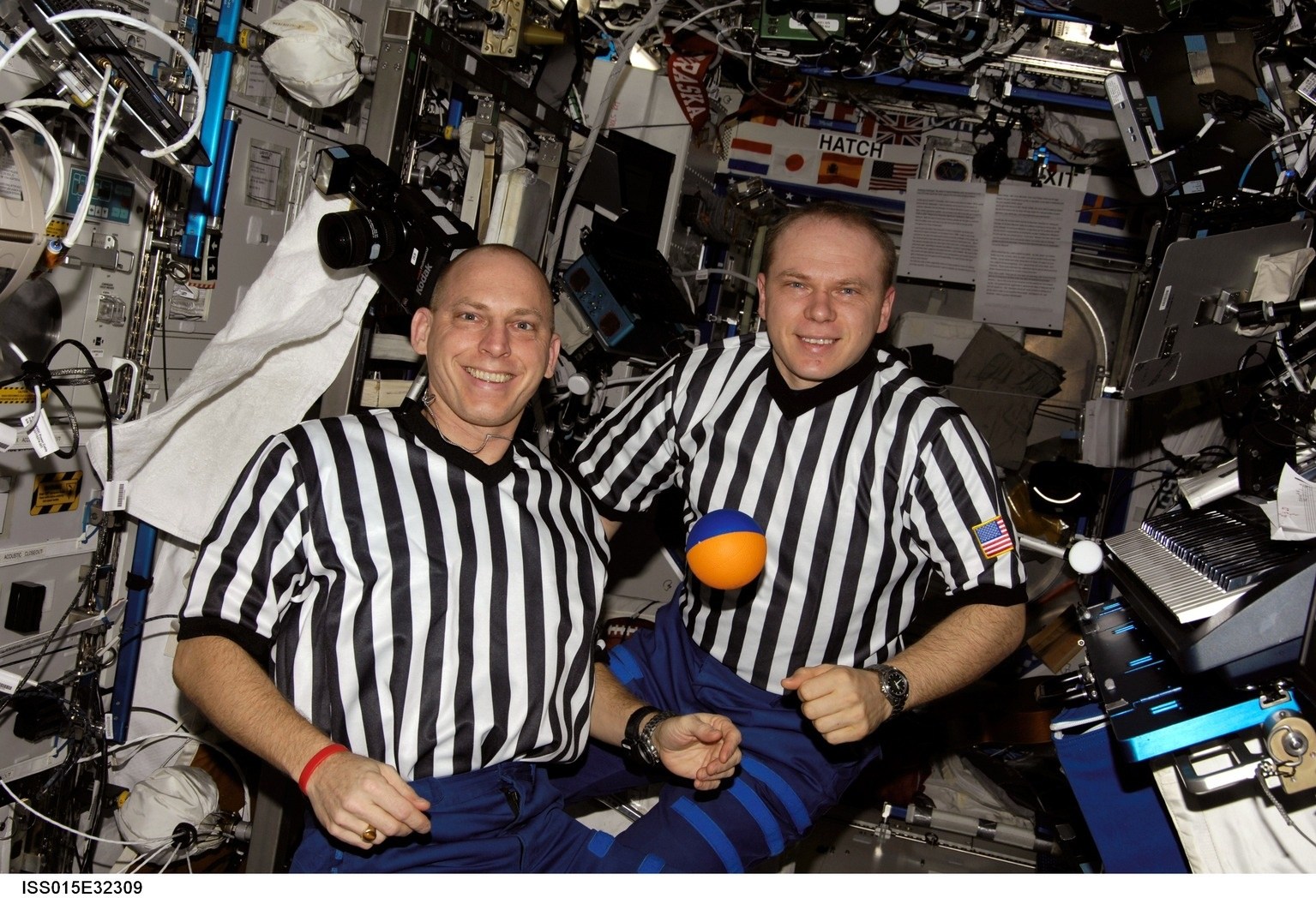 or sometimes, in an effort to make the work easier, we can be totally opposite in our positioning. 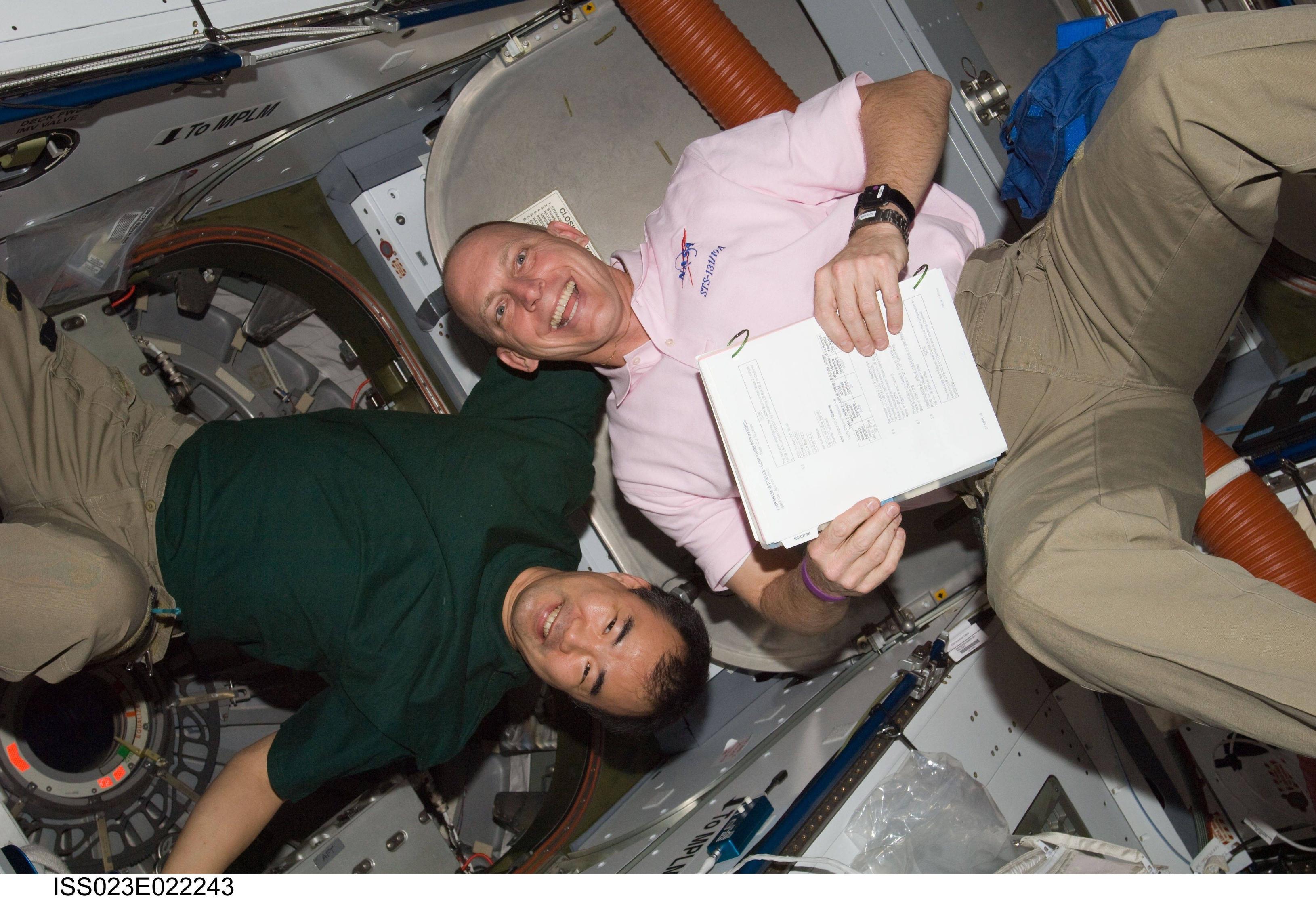 An explanation, from back in the day of Skylab:

"Cabinets, consoles and instruments jutted off in all directions from the inside of the cylinder wall. In the docking compartment there was no visual compass, no up and down. Mounted to one side were the main controls for a solar observatory, and partway around the cylinder from there, the main control console for the earth resources experiments but oriented 90 degrees from the orientation of the telescope console. The observatory telescope and earth resources instruments themselves were mounted outside the cylinder on a truss. Most of the astronauts found the docking compartment, and its lack of orientation, disconcerting. They found the location of the control consoles, mounted at peculiar angles to everything else in the station and 30 meters above the floor of the lower deck, uncomfortable. To make matters worse, the Apollo command module, clearly visible at the other end of the cylinder, and in which the astronauts rode to and from the station, had a strong local vertical exactly opposite that of the station’s workshop.

Gerry Carr, commander of the last crew and another consultant to the space station design group, said during his mission: “I get.. .one local vertical.. .embedded in my mind, and I whistle down the tunnel and into the command module and zing, all of a sudden its upside down”. Bill Pogue said “Well, all I gotta say is, if you are looking for a very good example of how not to design and arrange a compartment, the docking adapter is the best example.. .every time 1 think about how stupid the layout is in there I get all upset.”

And to exacerbate this, the location coding, numbering system inside the docking compartment was chaotic. Pogue said “locatability is so bad it almost looks like you had to go out of your way to design it that way.. .”

A strong recommendation was made by most of the Skylab crews that for future stations a consistent local vertical should be maintained within any compartment with a contiguous field of view. But Ed Gibson said he thought “the lower decks of the workshop wasted a lot of space.... the docking compartment is more efficient”, but even he had difficulty finding things when he went in there.".

Not the answer you're looking for? Browse other questions tagged iss astronauts astronaut-lifestyle or ask your own question.

12
Has dependent one-carbon metabolic pathway been successfully linked to ocular health of astronauts?
14
How does an astronaut pack for the ISS?
3
How long can an astronaut stay in space and later have children?
1
Zero-g astronaut motion
6
Did any astronaut take a Bible into space?
11
What is Astronaut Sunita Williams wearing on their wrist?
87
Could an Apollo astronaut stand up if they fell on the moon?
7
What protocol is in place if an astronaut kills another astronaut in or around the ISS?
2
How was the deep blue colour of these astronaut “jump suits” selected?
25
What happens to astronaut sweat on the ISS?