Trying to calculate the impulse of a little ion thruster I'm putting together. An old version of it can be found here, I'll be polarizing the AC current and putting in copper nails on the next version:

I'm currently writing up a paper on how much thrust my little device puts out. It ionizes the air in the room and sends them through an electric field to create the thrust.

I'm wondering if there's something additional I'm not taking into account in my calculations. I saw something about how on NASA's ion thrusters, the power efficiency is 61%, but that's still not enough to account for this discrepancy. If it is a power efficiency problem, how would I go about calculating this? If not, what else could be leading to this calculation problem?

For the record I haven't experimentally checked the actual thrust, I want to make a prediction of what it should be before I turn on the new system. 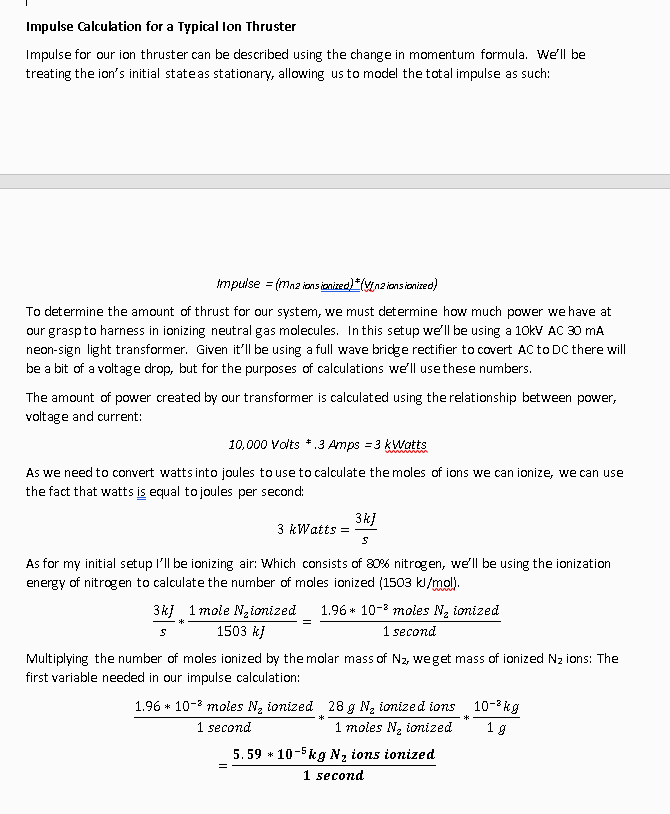 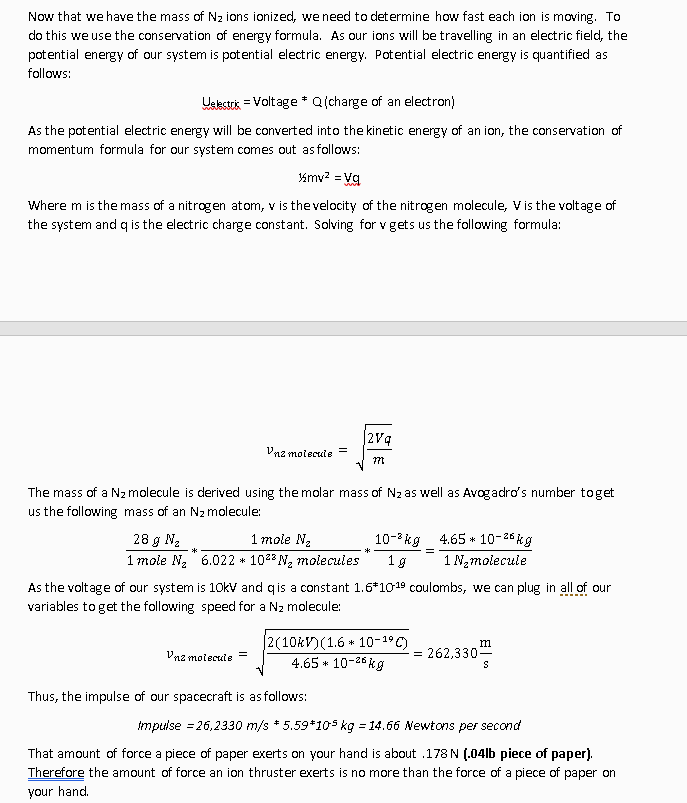 The thrust force is the transfer of momentum per unit time:

Assuming ions accelerate by mutual coulomb repulsion with the device without any interference, the magnitude of the momentum transferred to the device for each ion is equal to the ion's momentum, which we can get from the possible kinetic energy $T$ of 10 keV (10 kilovolts times a 1 electron charge).

The thrust is equal to the mass and velocity of one nitrogen ion times the number of ions per second, for which you are using the maximum current of the transformer:

One problem with your solution is to assume all of the possible electrical power available from the transformer is used for ionization. There are many places for power to go here, so that's not a safe assumption, and your value of 5.59E-05 kg/second of ionized N2+ is probably way too high. One 10 keV electron is not likely to efficiently ionize hundreds of nitrogen molecules as it slowly decelerates. While cascade ionization does happen in a spark or breakdown, it's not close to 100% efficient, and in this situation there is no breakdown at all.

Instead, you can conserve charge or current, and treat the maximum possible thrust as coming from one ion produced for every electron collected from the nail, which is what I've done above.

That's if you are really accelerating 0.03 coulombs of nitrogen ions per second from 10 kV potential all the way to ground. Much of the current may not be used, much of what little current you are using (probably tens or hundreds of micro-amperes if I had to guess) is going to coronal discharge and heating the air rather than producing thrust, but that's a different topic, as is my additional comments below about operating an ion thruster at ambient atmospheric pressure.

For impulse or thrust calculations for nozzled engines or ion engines, the exhaust or reaction mass are moving at (roughly) full velocity when they leave the nozzle or exit grid so it's okay in those cases to use the velocity. But in your experiment, the ions never get a chance to accelerate to anywhere near their possible 10 keV kinetic energy because you don't have an exit grid and a near-vacuum-filled acceleration space before it.

The velocity calculation resulting in 262,330 m/s assumes the ionized molecule accelerates without colliding with any other molecules along a path that goes all the way to ground potential (or nearly) and this would be several centimeters, but the mean free path in ambient air is only of the order of 0.1 microns. In this case thrust is the electrostatic repulsion between the nail and the (drifting) cloud of ions that the air has rapidly slowed to a drift velocity.

below: An example of one kind of ion thruster. Acceleration takes place between the last two grids, before exiting the engine. In this case the final grid is even slightly negative. From here. 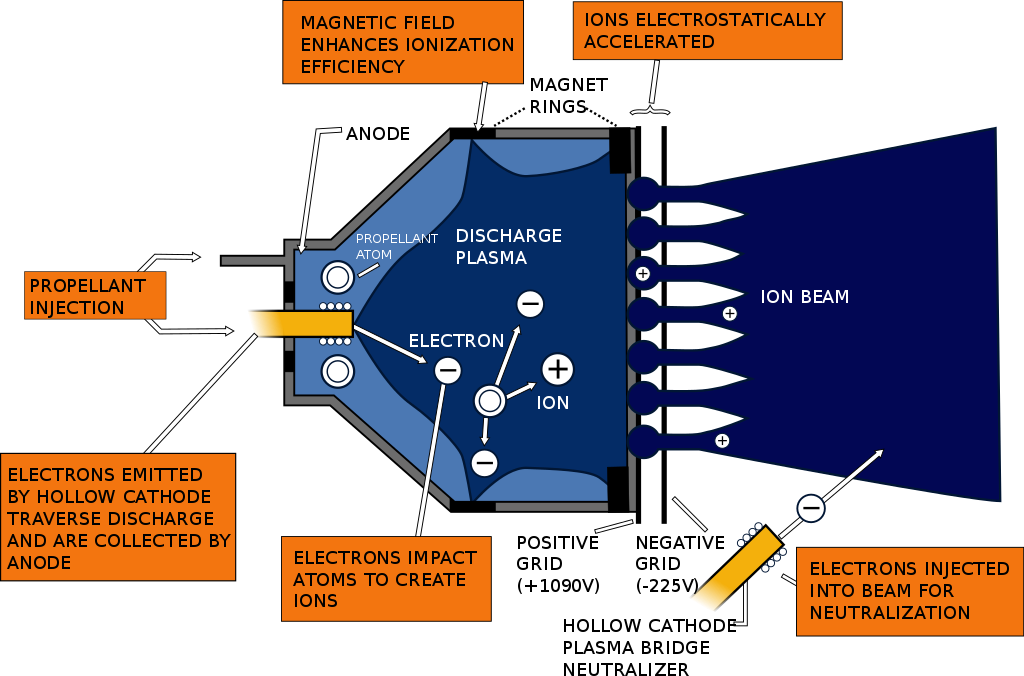 I am not a physics major, but an electrical engineering major, yet I thought I should mention that there is an error in your calculation for the power delivered by your 10kV 30mA neon sign transformer. To find power, you calculated 10,000V x 0.3A = 3kW. However 30mA is actually 0.03A, so the answer for that step should have been 0.3kW or 300 W.

That at least brings your calculations closer to what you expected by a factor of 10, before considerations of whether your NST is actually delivering 30 mA of power and subtracting how much power is dissipated as heat.

Unit of impulse is newton-sec and not newton/sec and it is not equal to thrust because you are not going to accelerate all the ions in duration of 1 sec. Therefore, if it takes more than 1 sec then your thrust would be lesser than your calculated impulse value.

Not the answer you're looking for? Browse other questions tagged rockets propulsion ion-thruster or ask your own question.

9
Thrust of ion thruster when spacecraft is charged
5
Where can I learn to calculate the physics of an ion thruster?

10
Troubleshooting a DIY Ion Thruster
2
Calculating thrust pressure from ion thruster for rocket thrust equation
2
In theory, how much thrust could an ion thruster generate?
1
Looking for figures for contemporary interstellar engine options
9
Thrust of ion thruster when spacecraft is charged
3
Estimating thrust and kg fuel for a generation ship's journey to Alpha Centauri
2
Can external plasma enter the chamber of an ion thruster?