Space Shuttle range safety system - Why is there a caution light?

Why did the Space Shuttle have an indicator to alert the crew to the arming of the range safety destruct system? Quoting from here:

The first message, called arm, allows the onboard logic to enable a destruct and illuminates a light on the flight deck display and control panel at the commander and pilot station. The second message transmitted is the fire command.

This seems, er, rather grim. Why is this light there?

Edit: Perhaps it is used for testing purposes - can anyone provide a reference for whether this indicator was used by the crew or ground personnel during pre-flight checkout? Second idea is that it was to alert the crew to accidental arming, however since the command decoders appear to have used some type of encryption this seems unlikely to have occurred accidentally by remote. If the range saftey system had become armed by an internal vehicle fault, is there anything the crew could have done about it?

The Range Safety Armed light was a cue for the crew to eject during the Orbital Test Flight period of the Shuttle program. After the ejection seats were removed from Columbia, the light was still there.

The location of the indicator changed after the Orbiter 'glass cockpit' upgrade, but it was in the vehicles until the end of the program. 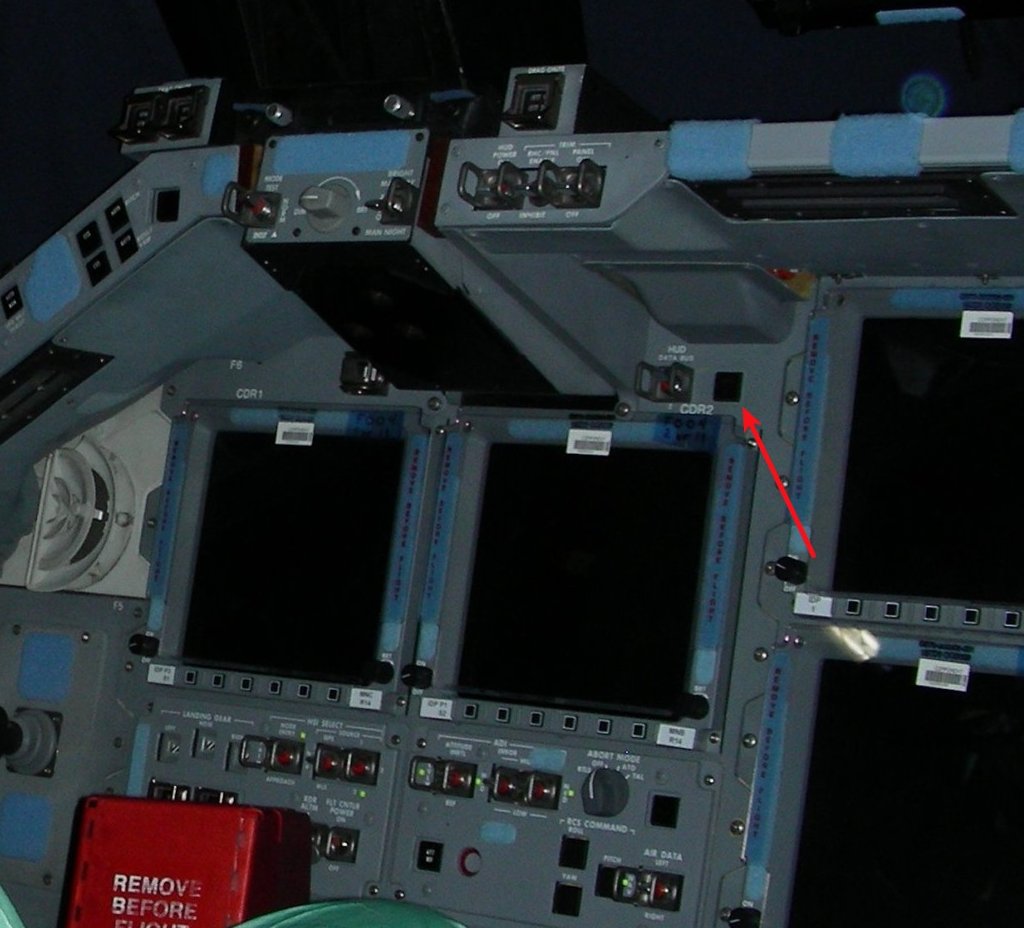 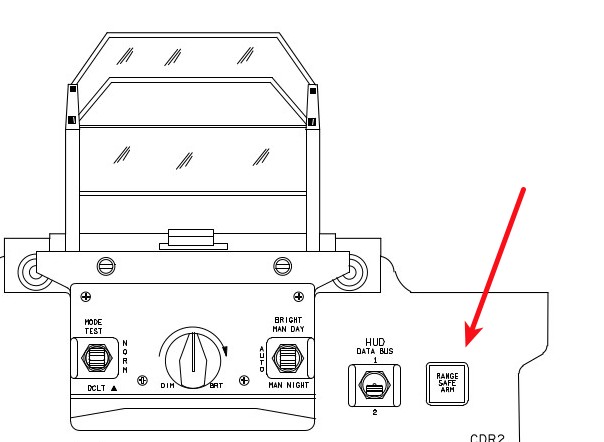 (Personal photo taken in Orbiter cockpit in May 2008, drawing from SCOM, see link below)

For the latter part of the program, the only Range Safety System left on the stack was in the Solid Rocket Boosters. So if Range Safety actions had to be taken in 2nd stage, the illumination of this light served as a backup or no-voice-comm cue to the crew to take the actions they had been briefed on.

During first-stage, trajectory deviations may lead to a violation of a destruct line by a shuttle that is still under control. It may be possible to return the vehicle toward its nominal trajectory or to safely execute an abort. Therefore, the Flight Director (FD) and Flight Dynamics Officer (FDO) are in voice communication with the Flight Control Officer (FCO) (formerly Range Safety Officer) during ascent. If the FCO detects a violation, the FDO and FD are immediately informed. The FD must determine whether the shuttle is controllable or uncontrollable, and inform the FCO. As long as the FD declares the shuttle controllable, the FCO takes no action to terminate the flight for trajectory deviations alone.

A deviation from nominal trajectory that is large enough to warrant FCO action must be corrected. First-stage options are:

In second stage, the options are:

• SSME manual cutoff. For loss of comm, FCO will send the ARM command as a cue for manual MECO

I think I may have found a possible answer. The control panel for Columbia had the indicator: 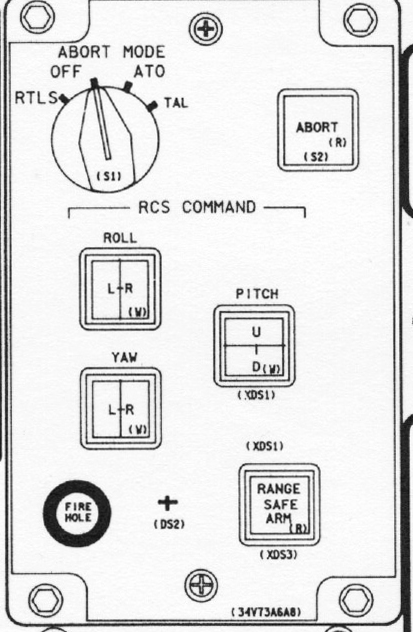 The control layout for Discovery (and presumably the other orbiters as well) was somewhat different, and does not have the indicator: 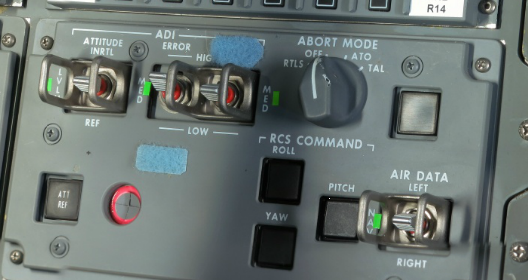 Given that Columbia was originally fitted with ejection seats, in that context the indicator seems to make more sense.

I can’t speak about the use of the arm indication early in the program but it was used for a time to indicate the crew should shut down the main engines in a comm out situation. It was utilized in this role per Shuttle Range Safety Mission Rules, until the Range Safety Flight Termination System (FTS) was removed. After that time and until the end of the Shuttle Program, an Arm Command was immediately followed by a Fire Command for that period of SRB flight and USAF Range Safety initiated main engine shutdown, if required, was initiated via verbal communication from the Flight Director. A JSC lead Flight Dynamics Officer and I (a USAF Range Safety Officer) were responsible for the Shuttle Range Safety Destruct Criteria from 1992 through 2008.

According to Wikipedia (https://en.wikipedia.org/wiki/Range_safety), the solid rocket boosters and the external tank were armed with the capability of being blown up, but not the shuttle orbiter itself.

Here is a cockpit photo from Wikipedia. I added some labels to show what some of the switches and buttons doing.

I am showing the new location of RANGE ARM SAFE light. 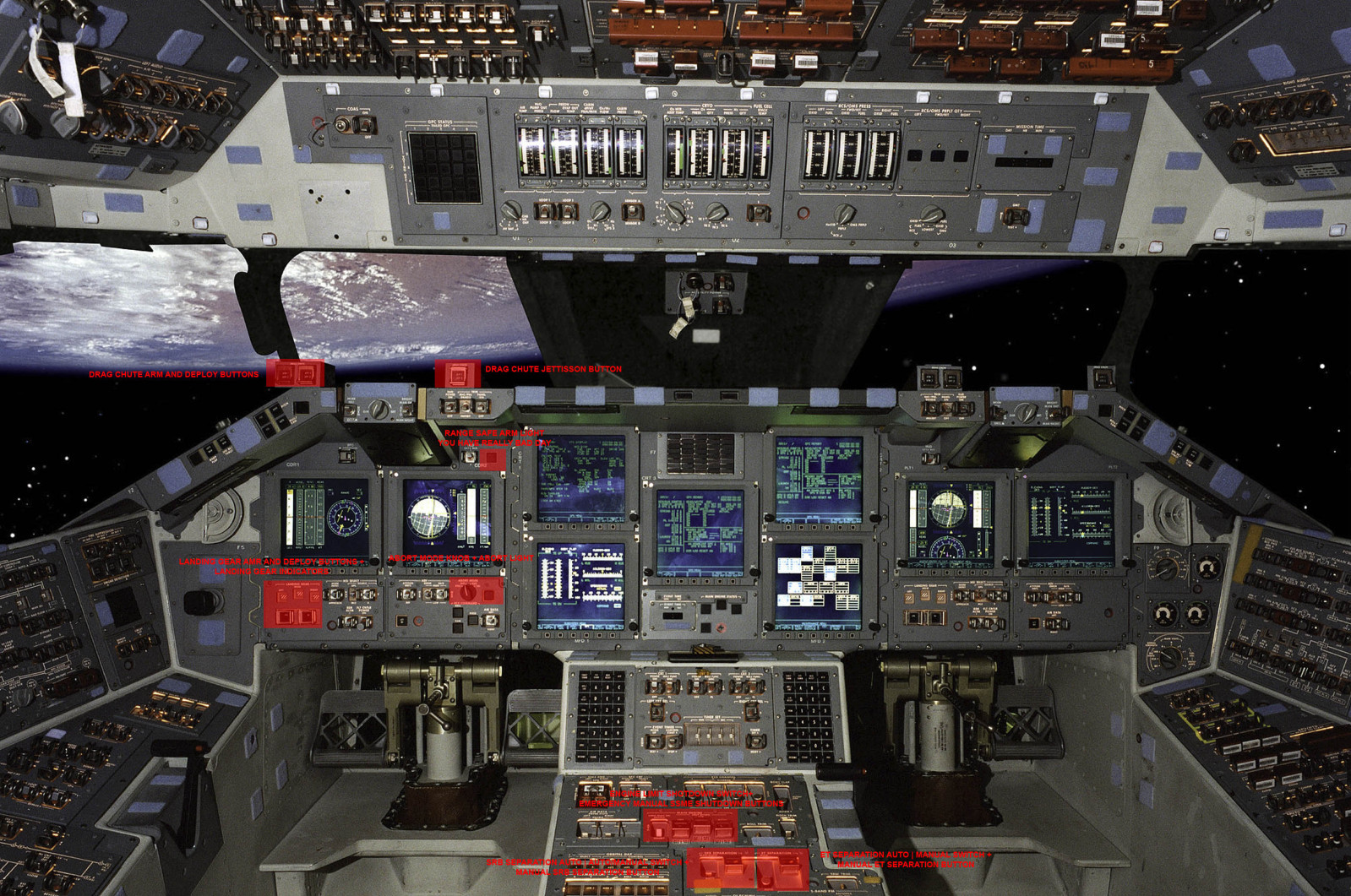 And if I would be an astronaut I would like to know what is going to happen with me.

EDIT: http://history.nasa.gov/rogersrep/v1ch9.htm This explains a lot.

First of all SRB may hang out on aft attachment points when you try to jettison them while they still provide thrust... But when SRBs are burned out you can do a fast separation and quickly separate the ET from shuttle.

Looks like that this not confirms that shuttle itself has a charges. On this picture you can see only SRB and ET linear charges. Note that IIRC charges on ET was later removed.

Since the current range safety system does not allow for selective destruction of components, the Commission believes that NASA and the Air Force should critically re-examine whether the destruct package on the External Tank might be removed.

Looks like i was wrong and there is no selective destruct. Now after ET charges was removed probably only SRB have charges as they are most dangerous because of uncontrollable flight when detached from rest of package.

And OFC there is no need for charges inside shuttle itself as its the safest part of whole package. It's rather predictable, the thrust of SSME can be terminated by command, it had not so much dangerous fuel.

The ET itself is quite dangerous, its flight is predictable but when it hit ground there will be huge explosion. IMO the decision to remove charges from ET was not so good. Implementing selective destruct would be much better IMO.

It would be armed prior to destruction, not as part of launch sequence but only in emergency. Don't forget that, in theory, it's possible to bail out before the RSO (Range Safety Officer) initiates self-destruct.

So if the crew see this light, they can always try to bail out. And astronauts should be always informed about everything, just like airplane pilots and soldiers on battlefield.

Don't forget that you can always shut down engine to terminate thrust (its possible from ground and there are also button in cockpit, those buttons are on center panel between commander's and pilot's seats).

SRB can be jettissoned, normally its automatic but you can also do it manually in emergency (using ground command and there is switch + button on center panel between seats).

ET (External Tank) can also be jettissoned manually (switch + button on center console between seats, i am not sure about ground command).

So its very easy to terminate thrust and turn this "rocket" into glider then blow SRB away from Space Shuttle itself.

Not the answer you're looking for? Browse other questions tagged space-shuttle flight-termination-system range-safety or ask your own question.

12
What is the problem with aborting a Space Shuttle launch?
6
How to identify which Space Shuttle, from a high-res cockpit photograph?
2
When is the self-destruct of a rocket armed?