In an emergency how much and what kind of protection would a spacesuit provide protecting against an explosive decompression event in the habitat the wearer is in?

Can air pressure be accumulated this way for a biodome or spacesuit?

The first four Space Shuttle missions had ejection seats, which is basically an intentional explosive decompression. The astronauts wore Launch Entry Suits designed to survive the decompression and ejection process.

The current NASA suit is the Advanced Crew Escape Suit. Like the LES it derived from, it is designed for decompression and escape, although with a built-in parachute. But you have to be wearing it:

The Russian launch suit is the Sokol. It was designed after the loss of the Soyuz 11 crew due to depressurization, so the suit's ability to maintain pressure is a primary goal.

The Extravehicular Mobility Unit is the suit used for spacewalks. It's not designed for emergencies, although it should retain integrity during a decompression, as it is tough enough to withstand abrasion and micrometeorites.

The Hollywood scenario that a person could quickly put on any of the above suits in an emergency is extremely doubtful.

I'm posting this as a second answer because this refers to a spacesuit that only exists in prototypes. The other answer refers to "real" spacesuits.

If the habitat uses suitports, an astronaut could theoretically get into a suit fast enough while holding their breath, without passing out. In other words, it's a way to make the dramatic Hollywood scenario work. Here is the procedure:

What happens next depends on whether the habitat hatch was also closed. This can only happen if a mechanical linkage was designed between the two hatches, or if another crew member stayed behind to close the hatch (sacrificing themself). 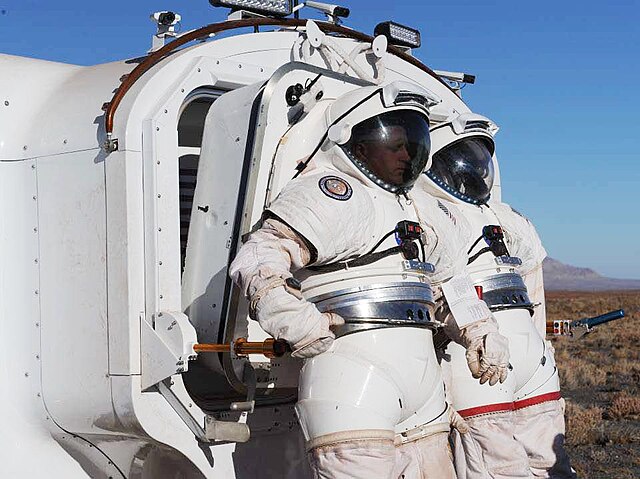 Not the answer you're looking for? Browse other questions tagged spacesuits shielding emergency explosives or ask your own question.

2
Can air pressure be accumulated this way for a biodome or spacesuit?

16
Why is the Sokol spacesuit considered inadequate for EVA?
15
What is the minimum pressure human body can live in, with head protected?
5
Could ozone be used in a biodome on Mars?
2
Can air pressure be accumulated this way for a biodome or spacesuit?
1
Would a Faraday cage made of gas block radiation?
0
Which satellites can hear emergency signals from Scott Kelley's watch?
2
Current state of the art Mars spacesuit?
3
Could a pressure suit be used for a short emergency EVA?
3
What would be the longest hypothetical emergency which would confine the Apollo astronauts to their suits?
6
How can an Astronaut survive for six days inside a Spacesuit?