LOPG/Deep Space Gateway - What is a cislunar orbit?

Formerly the Deep Space Gateway and now the Lunar Orbital Gateway or LOPG station, is planned for Expedition 1 aka the maiden launch of the SLS. After reading several specifications, to avoid the "gravity well" of earth the station will remain on a cislunar orbit. Some sources say that the station will be equipped with electric propulsion systems to adjust orbits, around the earth and the moon.

What is a cislunar orbit, and with this sort of orbit, could the station also orbit the earth with minor burns, and how would this work for rendezvous and docking?

Cislunar space is a large area:

The region outside Earth's atmosphere and extending out to just beyond the Moon's orbit, including the Lagrangian points, is sometimes referred to as cis-lunar space.

Earth orbits, Moon orbits and orbits around both (like Apollo 13's free return trajectory) can all be called cislunar orbits.

LOP-G would use a halo orbit: 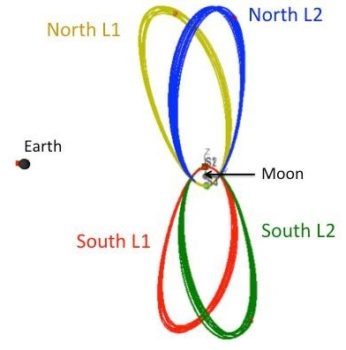 Such orbits, which make close passes by the moon and loop far out, have the advantage of being near the moon, but always keep a station within the line of sight of flight controllers on Earth, as well as in sunlight for solar arrays.

Not the answer you're looking for? Browse other questions tagged nasa lunar-gateway or ask your own question.

9
How is a Deep Space Gateway station in Lunar orbit helpful for going to Mars?
5
Could the Soyuz/Progress supply and crew a space station in Lunar orbit?
5
What are the advantages and disadvantages of assembling a space station in LEO before sending it to its intended Lunar orbit?
11
Why is a near rectilinear halo orbit proposed for LOP-G (formerly known as Deep Space Gateway?)
4
How will the Lunar Gateway go to L2 and L1; how much delta-v is needed?
5
How do I calculate the characteristic energy for a rocket to near rectilinear halo orbit where the Deep Space Gateway is going to orbit the Moon?
6
Aspects of "true deep space environment" on Gateway not thoroughly explored by decades of habitation of nine space stations already?