When is SpaceX's DragonFly propulsive landing technique likely to be demonstrated as part of a real landing, rather than the simple test shown below (from here)?

What will be the key objectives for the test? 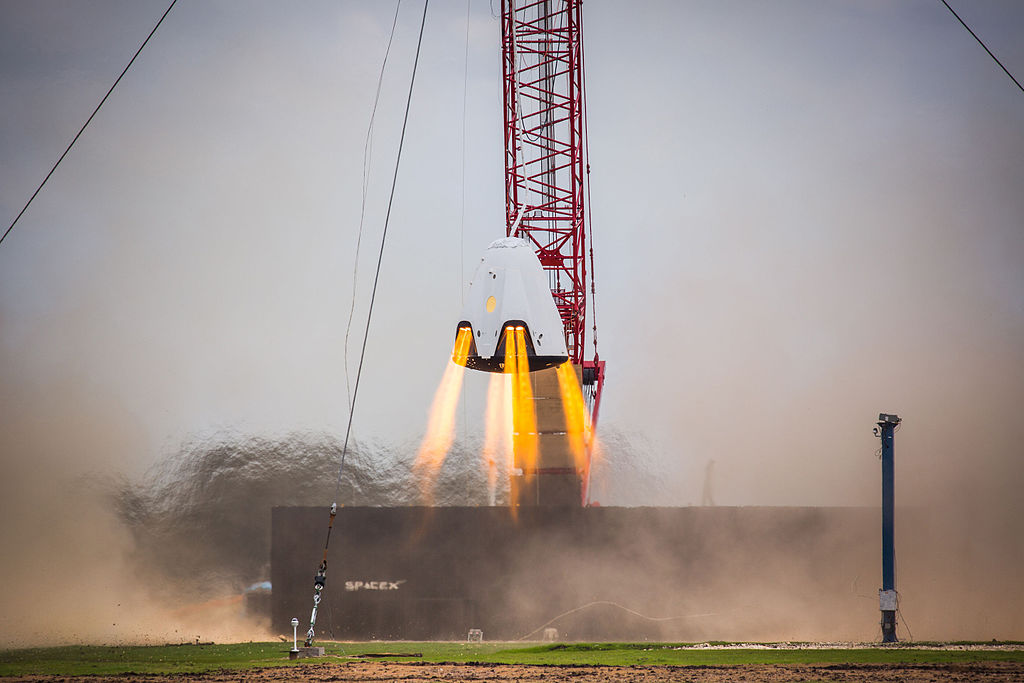 NASA was not comfortable with the idea of legs that went through holes in the heat shield, and thus SpaceX reverted to water landings for Dragon Crew vehicles.

Once that choice was made, and with BFR on the horizon, they decided not to spend the money on developing a feature for which they had no paying customers.

This also meant the Red Dragon mission (Dragon v2 sent to Mars by a Falcon Heavy) went by the wayside as well.

I agree with the other answer that this will not happen. I think the causes vary slightly, though --

The legs are an oft-repeated bit of fan speculation. We have a few real world examples of openings in heat shields, though, that don't indicate any particular problems. Shuttle had multiple openings, and while it had heat shield problems none were related to openings. A Gemini was flown with a circular hatch in it's heatshield, to enable MOL missions. This was never manned or ramped up to actual use, but it was tested successfully in flight.

There are several major factors in dropping propulsive flight. For one thing, NASA never requested it. They are currently the sole customer of Dragon and while they may find some uses of propulsive landings it isn't among the features they signed for, so they aren't likely to pay anything additional for it.

It needs qualification, and the only Dragon customer doesn't provide any post-mission opportunities for testing, like customers provided with F9 propulsive landings. NASA is nearly as concerned with cargo downmass from the station as cargo up, and won't risk contractually obligated deliveries for propulsive landing tests.

It has little benefit for SpaceX's future plans. Capsules don't scale up well - they need to get wider as they get taller in order to keep a stable shape for entry, and keep the side walls away from the hot plasma flows around the shield. Long/tall cylinders can't hide behind a small shield at the base. Because of this, their next returning cargo/crew vehicle (BFR) is intended to enter in a different way, with a side heat shield and bottom mounted engines (opposite of Dragon's arrangement).

It also isn't likely to reduce costs for SpaceX in the long run. They can't rely solely on propulsive landings and must plan for a water/parachute touch down zone in case of an abort to parachutes after high altitude engine test failure. This means having a recovery ship prepositioned off the coast while the capsule approaches.

No extra revenue, no cost savings, no R&D useful to future vehicles, and expensive out-of-pocket testing process. That's why the landings were cut.

Not the answer you're looking for? Browse other questions tagged spacex dragon-v2 mcgregor-tx or ask your own question.

34
SpaceX and propulsive landing on Mars — what just happened? (and why?)

4
How will the Dragon 2 perform a pinpoint landing without aerodynamic controls like the F9R did?
2
Could the Dragon 2 abort after trans-lunar injection?
2
Do the SpaceX ASDS orient themselves in a particular direction before a landing? Is there a “landing ellipse”?
3
What is this “space ring”? Is it SHERPA or something new, or just “art”?
6
What would the BFS' landing on Mars be like, if it is different from this animation?
3
How do you shut off a Merlin-like rocket engine quickly? How quickly can it be done?
6
Why can't SpaceX Starship perform the same landing procedure as the Falcon 9 does?