What Soviet-era space-related film is this Nick Stevens tweet referring to?

and this Tweet links to several newer photos of the ADU-1000 array.

Some more photos of the ADU-1000 "Pluton" Soviet radio antenna. The base turntable is taken from a battleship big gun. The big spine under the dishes is made from joined submarine hulls.

The ADU-1000 Pluton deep space antenna is the see-once and never forget array of dishes at the Pluton complex, and Korolev and Gagarin of course refer to the historical rocket scientist and astronaut of the early Soviet space program.

QUESTION: What Soviet-era film is this Nick Stevens tweet referring to?

According to the Wikipedia article:

The Pluton complex supported all the Soviet space programs until 1978, when the Yevpatoria RT-70 radio telescope was built, then the Pluton became a backup system for the RT-70. The Pluton complex was the world's highest capacity deep space communication system prior to Goldstone in 1966. 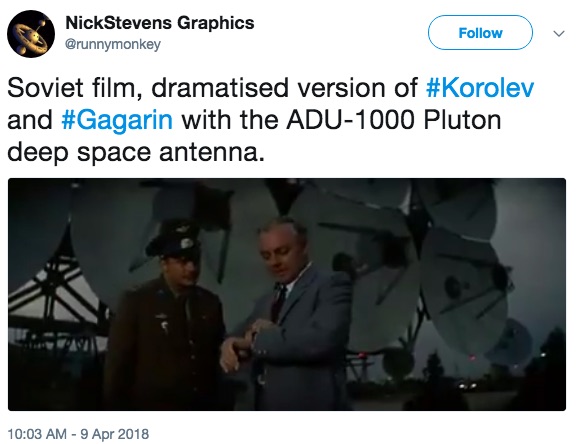 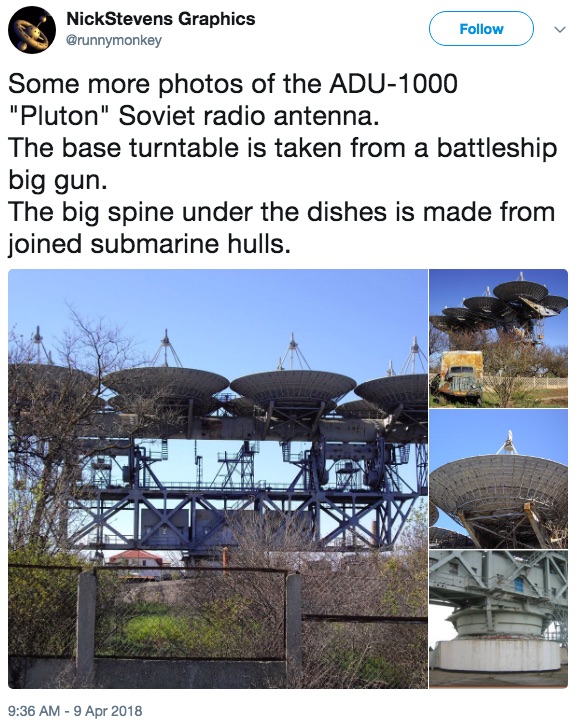 That frame is from the movie "Taming of the Fire". In Russian: "Укрощение огня".

About Russian space program and missile industry, and it's founder Sergei P. Korolev, from the 1920s to the first man in space in 1961.

Not the answer you're looking for? Browse other questions tagged history space-art or ask your own question.

4
What budgetary and technical impact did the N1 program's failure have on the Soviet Union's space program?
1
What technical challenges would be playing this LP in (actual) space?
11
How do items from the Russian and Soviet space programs end up in private collections?
17
Who is the artist of this image appearing in an article about a Russian space laser?
1
What might this “NS” mean in this speculation about this Mars rover's future prospects?
1
What do these GPS-related emblems represent? Does one of them show “Marvin the Martian”?
2
What is the name of this space museum in Russian and does it have a website and/or virtual tour site?
4
What exactly are Tindallgrams? (spaceflight related)
4
What radio frequencies were used by the Soviet space program circa 1961? (“Lost Cosmonaut” recording)