Why was TESS' launch window open for only 40 seconds per day?

After about 03:30 Dr. Seager mentions that the launch window only lasts 40 seconds, with (at least one) subsequent launch window occurring the following day.

The repeating of the launch window after about 1 day suggests (to me at least) that the narrowness of the window is strongly associated with the rotation of the Earth. TESS' orbit is always bound to Earth, but requires careful synchronization with the Moon's orbit having a 2:1 resonance as discussed in this answer as well as the video and other linkes therein.

In 40 seconds, Cape Canaveral rotates about 0.17 degrees around Earth's axis, moving only about 16 kilometers in a Geocentric frame.

Is the launch on the very edge of what the Falcon 9 is capable of energetically, or is it too challenging computationally or navigationally to insert into the complex series of maneuvers outside this 40 second, 16 km, 0.17 degree window that repeats the following day?

Or could this be in part a bit of SpaceX bravado or excess as might be indirectly inferred from the question, answers, and comments associated with Why would a mission to Sun-Earth L1 have an instantaneous launch window?. That doesn't seem likely as the window has a specific, finite duration of 40 seconds, rather than the 1 second, effectively instantaneous window discussed there.

More on the potential daily repeats of the window is suggested by the Spaceflight 101 article TESS Orbit Design:

Because of the large number of constraints and high variance in starting conditions found in the relative geometry of the initial orbit and the Moon, trajectory designers developed an automated trajectory design algorithm that takes into account the spacecraft parameters, error statistics, force models and the various constraints like eclipses, upper boundaries for perigee, apogee and period, etc. The automated process delivers an optimized solution for each feasible launch date which is then put through a Quality Assurance process to verify that all requirements are satisfied – creating five discrete launch windows per month, each between one and four days in duration.

This paragraph does not directly address the 40 second window, but instead suggests the window might repeat for as many as four consecutive days some times, if I understand correctly.

Handy links for explanations and discussions of the $C_3$ parameter (re "Is the launch on the very edge of what the Falcon 9 is capable of energetically, or..."):

The short launch window appears to be due to a combination of the very precise orbit requirements of TESS and SpaceX's tendency to bravado.

Information on the exact reasons is thin on the ground and I've read several contradictions (or maybe there are just multiple reasons):

From here (from OP in comments):

On each launch day, the daily window will only be a few seconds in duration based on Falcon 9 fuel loading requirements.

Falcon 9 lifted off at precisely 22:51:31 UTC, the opening of a 30-second window constrained by TESS’ tight timing requirements to intercept its lunar flyby window one month after taking flight

So let's try to come to a reasonable conclusion using more basic information.

The optimal launch time is not exactly determined by Earth's rotation, more the elevation of the moon at the time of launch (which is obviously closely related to Earth's rotation).

Careful reading of this document gives us the following reasoning:

...the spacecraft will conduct a major boost when coming close to Earth again in six days to lift the high-point of its egg-shaped orbit to match the Moon’s orbital distance. The next two orbits will be filled with correction maneuvers to refine the flyby path

However this 'major boost' is included in the delta-v budget of only 208$ms^{-1}$ for the entire series of manoeuvres, including the final Period Adjust Manoeuvre. 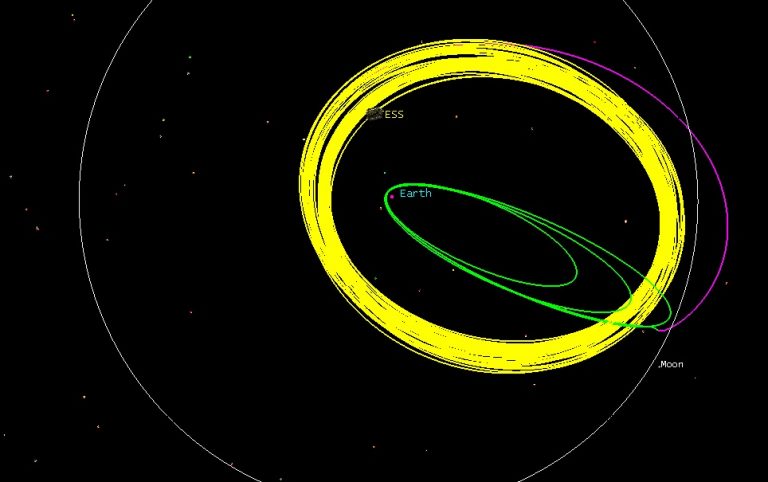 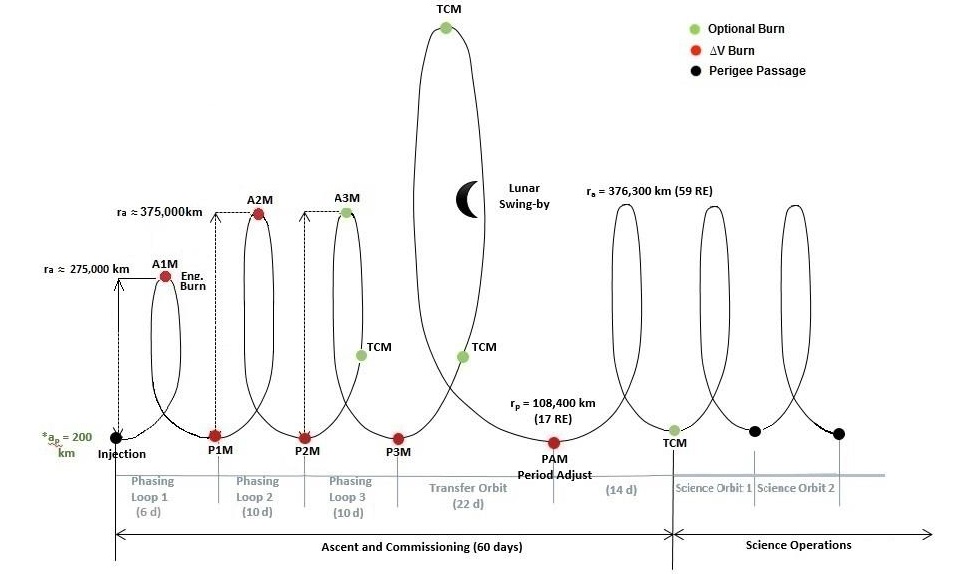 Taking this into account, TESS had a budget of only:

With such a small budget, perigee-longitude adjustments would be out of the question. Using single injection burn from an LEO parking orbit such as this, the argument of perigee is entirely determined by the timing of the injection burn. The inclination is set by the launch azimuth, but can be adjusted using doglegs.

From all this we can conclude that the injection burn needed to be very precisely executed (43 minutes after launch) and timed to coincide with the correct relative inclination and elevation of the Moon because TESS had limited ability to correct it retroactively.

During the launch, however, some correction could be made, as long as Falcon 9 was capable.

It was well documented that the Falcon 9 was oversized for launching TESS. F9's typical ASDS landing GTO capacity is ~5500kg. However, TESS's 248km x 270000km injection orbit is significantly higher than a typical GTO. This calculator suggests a delta-V requirement of ~3080$ms^{-1}$ for this orbit - a 26% increase. I estimate this will give F9 a capacity to TESS's orbit of ~3600kg when accounting for the ASDS landing.

This is much larger than TESS's 325kg, so we know the upper stage still had plenty of fuel to spare.

However, much of that spare fuel was used to eject the upper stage into a heliocentric orbit after payload separation as mentioned in this detailed launch timeline.

From this, we can surmise that Falcon 9 couldn't perform enormous course corrections during launch, but surely enough to not warrant such a tight window.

The injection orbit was subject to very tight restrictions in order for the mission to be a success, but the launch less so. SpaceX, in its usual style, presumably wanted to target the nominal launch profile very precisely to ensure larger margins for the droneship landing.

Note: There is obviously some speculation here on my part, but I've tried to rely on robust resources.

Not the answer you're looking for? Browse other questions tagged orbital-mechanics tess launch-window or ask your own question.

19
Why is Falcon 9's fairing so big?
16
Why would a mission to Sun-Earth L1 have an instantaneous launch window?
8
TESS orbit and moon resonance
11
What is the "launch energy" or C₃ measured in km² / s²
5
C3 calculation in interplanetary missions
7
Generating plot of LV's performance as a function of the C3 parameter
5
How can I calculate the Characteristic Energy to Sun-Earth L1?
4
Relationship of 'C3' to Delta-V for interplanetary missions
2
How do RAAN steering increase the launch window?
1
How to interpret and use characteristic energy C3 in this case?
See more linked questions

6
How much accuracy is required to achieve interplanetary orbit without adjustment or deceleration?
7
What's a Brouwer-Lyddane mean semi major axis, or any other, for an orbit in a lumpy gravity field?
3
First interplanetary launch from California! How far from Earth will InSight be when it separates from the Centaur 2nd stage?
6
How does the Parker Solar Probe have such a wide launch window?
6
Why put DSCOVR in a Lissajous orbit? Wouldn't a halo orbit completely avoid the Sun exclusion zone?
11
Why did GRACE mission have launch window?
3
Are there some three-body orbits that can't be escaped? Can we know without propagating forever?