How does the sabatier system reduce water shipments to the ISS?

So I thought I'd answered my own question (How close is the ISS to a closed system?), but I just realized there's a missing piece.

This is the chemical equation for how hydrogen, oxygen, and carbon are recycled and/or consumed on the station (now that the Sabatier system is in place).

Removing the recycled components, it simplifies to:

So the oxygen is recycled almost completely, but it still requires input hydrogen. This is provided by shipments of water. I thought recycling the oxygen saves a lot of water weight they don't have to launch anymore. But then I realized that if the hydrogen still comes from water, every two atoms of hydrogen arrives with an atom of oxygen. That's a lot of dead weight just to carry hydrogen to the station: sending 1kg of hydrogen requires launching 9kg of water.

And since oxygen isn't needed or consumed, where does it go? Presumably it's scrubbed out of the atmosphere as $CO_2$ and vented overboard. But then we're back where we started before Sabatier.

Basically, as far as I can figure it, the simplified equation went from this, before Sabatier:

How is the water input reduced?

The life support system on the ISS is rather complex, here's a diagram that NASA provides: 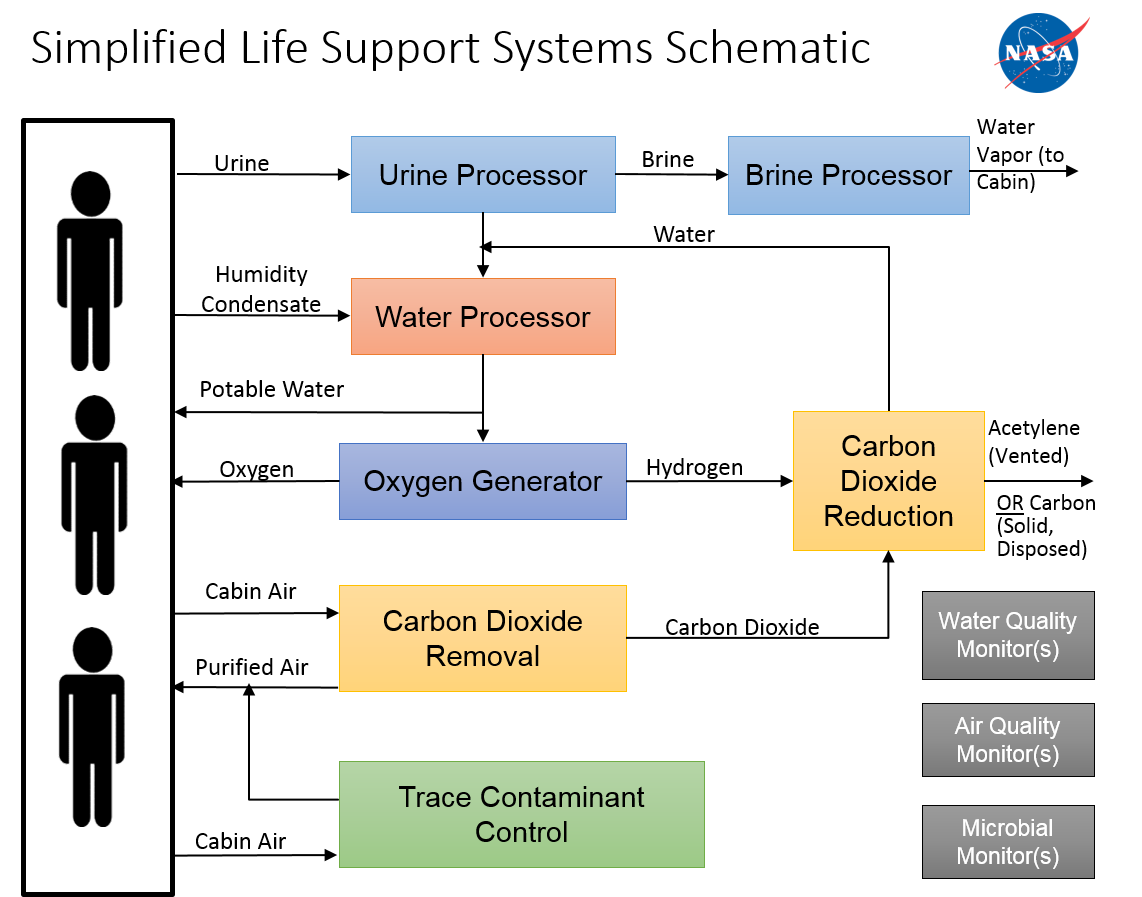 Bottom line is that the breathable oxygen is created from the water, and the hydrogen left over from that process is used in the sabatier process to reduce the CO2 and create water. Methane is also a byproduct of this process, and that is vented off board, although improvements have been made to dispose of more carbon rich materials like solid carbon or acetylene.

Bottom line is, the system isn't perfect, but it does take what were two waste products (Carbon Dioxide and Hydrogen) that were previously vented off of the spacecraft, and turns them in to water, with the partial waste of methane. It isn't a close looped system, but it does improve the process slightly.

The hydrogen for the process is shipped separately, in pressurized containers. A water particle atomic mass is ~18u, where hydrogen contributes about 2u and oxygen - 16u. That means even with the mass of the container, the total mass of hydrogen can be much lower than the mass of water needed to produce that amount of hydrogen.

Also don't forget that food is not pure carbon. It's carbohydrates, proteins, fats, all these contain plenty of hydrogen; roughly 2 hydrogen atoms per carbon atom, maybe a little less. All that hydrogen is bound with atmospheric oxygen and released as water with breath moisture and urine, then scrubbed out of the air. Electrolysis then separates it, for use in the Sabatier process, while oxygen is returned into the air. So you don't need a big stockpile of hydrogen to keep the Sabatier process running.

18
How close is the ISS to a closed system, in terms of carbon, hydrogen, and oxygen?
8
Does ISS get a surplus of oxygen or water?
0
Water Compressed on Space Station

10
How much heat did the Sabatier hardware add to the ISS heat profile?
18
How close is the ISS to a closed system, in terms of carbon, hydrogen, and oxygen?
8
Does ISS get a surplus of oxygen or water?
4
How many people could the ISS support?
14
How does electrical safety system work on ISS?
8
Why doesn't the ISS have more oxygen generators?
4
How exactly is the balance of minerals handled on ISS with the use of reclaimed (demineralised) water for human consumption?
11
Why was the Sabatier system removed from the ISS USOS?
6
How are the Archival Samples of water on the ISS handled?