How could JAXA not know when Hayabusa2 will arrive at asteroid Ryugu?

TOKYO -- A Japanese space probe is just weeks away from reaching an asteroid thought to contain primordial matter from the formation of the solar system, cruising toward the start of an 18-month observational orbit that may offer insight into the origins of life.

The Hayabusa2 vessel has come within roughly 260,000km of the asteroid, named Ryugu, with arrival expected between June 21 and July 5, Yuichi Tsuda, the mission's project manager at the Japan Aerospace Exploration Agency, said Thursday. The probe has enjoyed a smooth journey since its launch in 2014. (emphasis added)

Could JAXA's Hayabusa2 mission project manager really not know when Hayabusa2 will arrive at it's destination to better than a two week window? For comparison, see the BBC News article Apology after Japanese train departs 20 seconds early.

Is this an editorial oversight, or will the final arrival date be adjusted by propulsive maneuvers, or is the arrival time in fact not known for some other reason?

Hayabusa began firing three of its four ion engines again on January 10, 2018 marking the initiation of the far-field approach phase to take the spacecraft toward its destination with ion engine operation planned to last until early June when the final approach phase will be initiated from a distance of 2,500 Kilometers. [...]
Reaching the approach point in early June, Hayabusa 2 will rely on its three Optical Navigation Cameras to provide relative navigation data used by mission teams on Earth to plan the spacecraft’s final approach, first into a 20-Kilometer surveying orbit where the spacecraft is expected to arrive by July 5th. It will then be set for a step-wise descent first to five and then to one Kilometer from Ryugu’s surface to collect detailed remote-sensing data of the asteroid using a pair of infrared spectrometers tasked with studying the energy balance of the asteroid as well as its chemical composition.

I think one of two things might be at work here:

Hyabusa 2 (2014-076A, 40319) left Earth 03-Dec-2014 while (162173) Ryugu was nearly on the opposite side of the Sun in a slightly slower a=1.19AU elliptical orbit. After traveling around the Sun in an orbit close to Earths, and in order to get on an intercept trajectory Hyabusa 2 executed an Earth flyby almost exactly one year later on 03-Dec-2015, gaining some orbital energy and slowing down so that it would intercept Ryugu's orbit in 2018.

I've downloaded some trajectories from JPL's Horizons and plotted them in a frame that rotates with Earth. The small loop shows Hyabusa 2's first year near Earth and swingby, then it's slow trajectory using propulsion from its ion engines in order to intercept Ryugu. 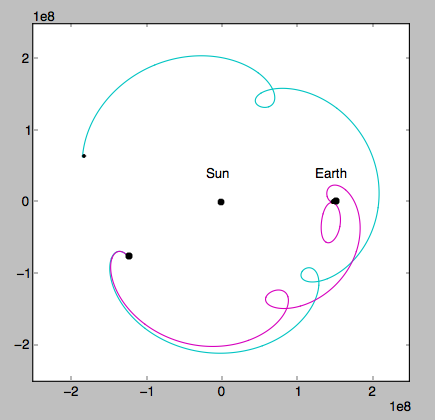 From astronomical measurements of Ryugu's apparent magnitude, it is assigned an absolute magnitude of 9.2 using the math which you can read about in this answer. With the assumption of an albedo of 0.05, Ryugu is estimated to have a size of about 800 meters in diameter. For more on that see Asteroid Size Estimator as well as Wikipedia's 162173 Ryugu.

The density of Ryugu is unknown, but if we assume that it's about 1.5 g/cm^3, (see for example Asteroid Density, Porosity, and Structure) then the mass would be about 4E+11 kg, and radius of the the Hill sphere around Ryugu at 1 AU from the Sun would be about 60 km.

Considering the considerable uncertainty, it seems JAXA will not attempt an orbit until much closer than that, or about 20 km.

8
How long will MASCOT operate on Ryugu?
9
How far will the debris cloud from Hayabusa-2's touch-and-go sample recovery travel around Ryugu? Will any have escaped to heliocentric orbit?
4
From interplanetary space to the Australian Outback, how will Hayabusa2's return capsule be tracked? Desert Fireball Network perhaps?