In the BBC News article Europe's Mars rover takes shape there is a short video describing the Structural and Thermal Model (STM) of the ExoMars Rover.

After describing the drill box, the narrator in the video says (approximate transcription):

But because you’ve got a drill, we’ve also need to be seeing where we are going to be drilling and to do that we’ve at the back here got ground penetrating radar.

So this is our ground penetrating radar bracket. There are two of them so you can see in stereo like you have two eyes, you get the depth perception.

And with those we can look at the structure of the rock for example in the ground and see where there would be a scientifically valid point to do that drilling so where there is a fissure between two different seams of rocks where there might be a life form protected from the harsh radiation at the surface might still be thriving today. (emphasis added)

We have two eyes because one eye has very little ability to sense depth, although there are optical imaging devices that can recover depth information such as Lytro's "light field" technology, and more interestingly REAL3™ depth-sensing imager chips which actually measures the photon time of flight on a per-pixel basis.

But radar, or RAdio Detection And Ranging certainly is sensitive to range and ground penetrating radar will provide reflected intensities as each depth.

So why are two ground-penetrating radar "eyes" necessary or important for the ExoMars Rover?

A single basic radar antenna can't tell you much. The most basic radar setup involves a fixed sending and receiving antenna and some software and drivers. Modern radar then uses a frequency ramp up or "triangular" pulse which it sends from the tx antenna (for example you sweep from 24 to 25 GHz over a short time). Then, you analyse the signal that returns. The time of flight can give you information on the objects range and the amplitude or signal strength gives you how radar reflective the object is. Then, you can analyse doppler shift and tell if the object is moving towards or away from you. The problem is, if you are only using one radar device (tx/rx pair) you only get two dimensional data. The rover can tell that it's above an ice pocket but it can't tell you if the ice pocket gets thicker to the left or right. This is why radar systems often have multiple antennas pointing in different directions or a spinning element.

Essentially, with one radar, the rover would generate an axis of data extending from the radar downwards. As the rover then drives, it drags this axis through Mars's surface and generates a 2d plane of surface data perpendicular to the ground. By having two radars perpendicular to the driving direction, the static rover creates a "plane of data" (which is coincidental with both of the single radar's axis). When the rover drives now, it "drags" the perpendicular plane through the ground and thus generates a 3d map of the ground. See arrangement of radar units here: 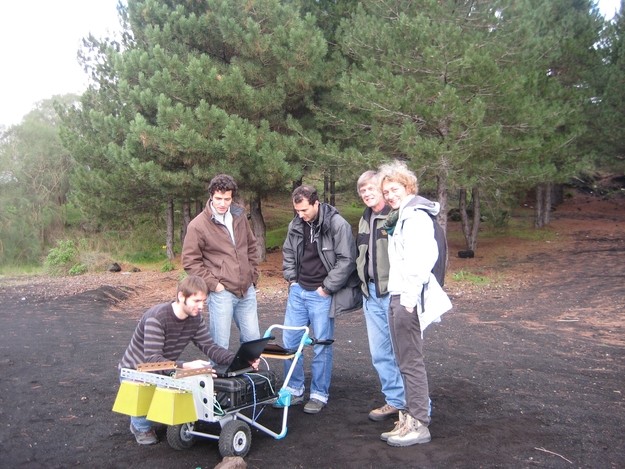 I've made some animations to explain what I'm talking about:

In this animation, a narrow beam radar is aimed downwards and detects an object. The rover does not know where in the "possible object location" area the object is but since the angle of the radar is so small, it can assume that it's within a small area.

Here the rover is using a wide beam to cover a lot of underground area. It can detect that there is an object and it can tell how far the object is away from the radar but it can't tell the angle of the object in relation to the radar.

Here the rover uses two wide beams and because it knows the distance that the object is from each radar and the distance between the radar units, a little trigonometry can find exactly where the object is underground. By driving forward while preforming these scans, a 3d image of the ground can be generated.

Note: This is a big simplification.

Not the answer you're looking for? Browse other questions tagged esa exomars or ask your own question.

7
Why Proton launcher for ExoMars, and not Ariane?
19
Curiosity is still dirty! How will the ExoMARS Rover keep its solar panels dust-free and collecting sufficient power?
3
Why does NASA and other space agencies seem to rarely if ever complain over the state of the budget?
2
What is the ESA Grip experiment, and why does it require Alexander Gerst to be strapped into it?
1
How does the contest for naming ExoMars work?
5
Why does ExoMars have more landing ellipse flexibility in 2020 than in 2018?
6
If the ESA has its own deep space network, why does it use NASA's?