During descent of a spacecraft to any planetary body the spacecraft uses retro engine with variable throttle to reduce the vehicle velocity to zero at touchdown.

Inorder to compute for the amount of throttle required the guidance needs mass and inertia(for RCS) of the spacecraft.

However, the mass and inertia are changing constantly as fuel is being used. It is definitely possible to compute onboard how much fuel is remaining based on throttle history. But this will result in error accumulation over time and probably the margins of closed loop controller will be exhausted.

So my question is... do spacecrafts employ some fuel measuring device on board? Like the way cars do ! However same device principle will obviously not work.

In order to compute for the amount of throttle required the guidance needs mass and inertia (for RCS) of the spacecraft.

What's actually important is to know your position, velocity, and acceleration. Estimates of mass are obviously useful but don't have to be 100% accurate if you have closed-loop control and good knowledge of your current acceleration.

For position and velocity, you'll want something like a radar altimeter and/or GPS.

An on-board accelerometer takes care of any errors in either the mass or thrust estimate, and automatically incorporates any atmospheric effects if you're landing on a body with an atmosphere.

Direct measurement of propellant level would be subject to errors due to sloshing; it's possible that dead-reckoning estimates of prop levels based on flow rate would be more accurate.

Measure of propellant level in zero-gee tankage is a tricky problem.

Shuttle attempted it in its Orbital Manuevering System.

A capacitance gauging system in each OMS propellant tank measures the propellant in the tank. The system consists of a forward and aft probe and a totalizer. The forward and aft fuel probes use fuel (which is a conductor) as one plate of the capacitor and a glass tube that is metallized on the inside as the other. The forward and aft oxidizer probes use two concentric nickel tubes as the capacitor plates and oxidizer as the dielectric. (Helium is also a dielectric, but has a different dielectric constant than the oxidizer.) The aft probes in each tank contain a resistive temperature-sensing element to correct variations in fluid density. The fluid in the area of the communication screens cannot be measured.

The system was problematic and Orbiters often flew with it nonfunctional. 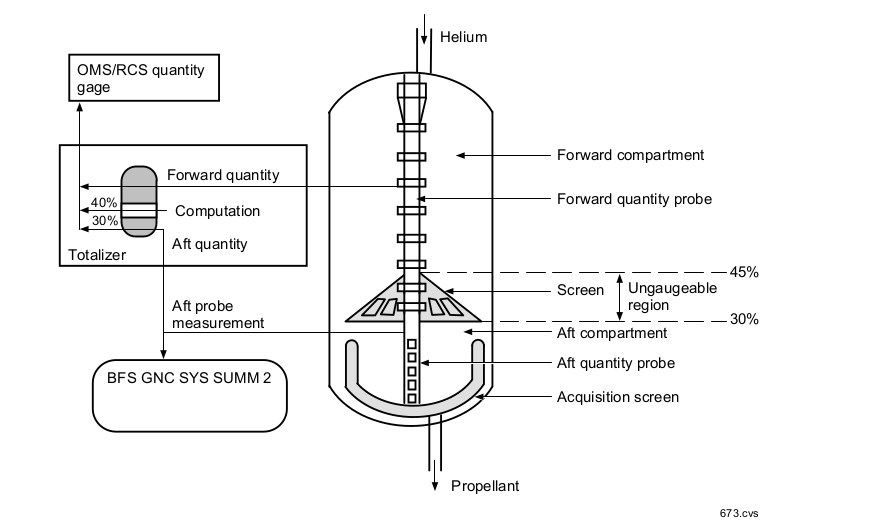 The RCS quantity monitor uses the GPC to calculate the usable percent of fuel and oxidizer in each RCS module. The quantities are computed based on the pressure, volume, and temperature method, which requires that pressure and temperature measurements be combined with a unique set of constants to calculate the percent remaining in each of the six propellant tanks. Correction factors are included for residual tank propellant at depletion, gauging inaccuracy, and trapped line propellant. The computed quantity represents the usable (rather than total) quantity for each module and makes it possible to determine if the difference between each pair of tanks exceeds a preset tolerance (leak detection). The sequence assumes that helium flows to the propellant tanks to replace propellant leaving. As a result, the computed quantity remaining in a propellant tank will be decreased by normal usage, propellant leaks, or helium leaks.

Propellant transferred between the two systems was estimated by a burn-time algorithm.

Just for completeness, the shuttle's External Tank didn't have a sophisticated gauging system for its propellant. Instead, simple on/off level sensors were used to aid in filling the tank, and to shut off the engines if the tank ran dry prematurely. 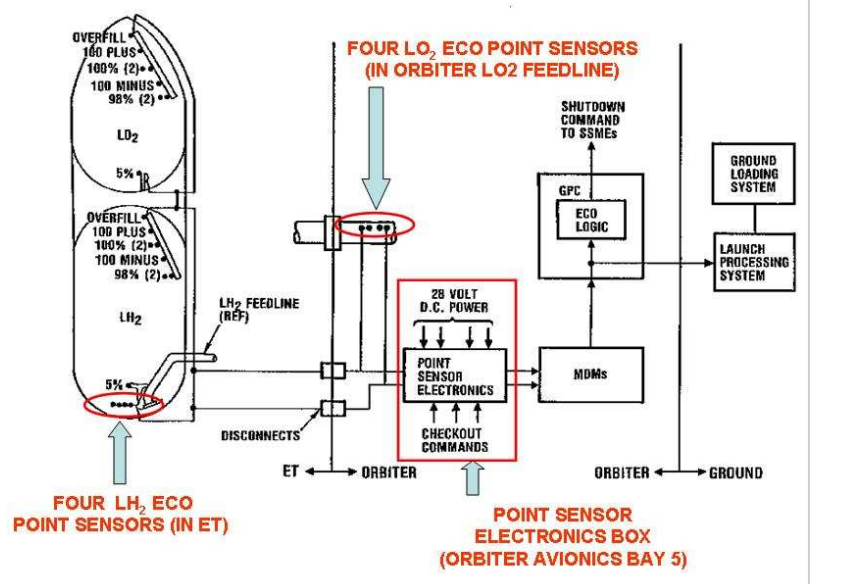 A variety of systems are in use, all with flaws, basically:

All methods 1 - 3 are in common use, especially on geostationary satellites with high yearly propellant use and critical timing of the satellite's graveyard and replacement. Methods 1 and 2 are often used in parallel.

Launch vehicle stages either burn to a predetermined time or to completion. Upper stages can be extremely complex in that they can be programmed to autonomously correct for problems with lower stages but ultimately it will simply use all the propellant. For this reason I believe method 1 is the most common though it wouldn't surprise me if flow meters (4. Other methods) get used too.

The shuttle with the interesting answer by Organic Marble is, I believe, relatively unusual. I believe each shuttle mission was planned to rules about allowances and margins, as also presumably is Soyuz/Progress. The notion of the general purpose spacecraft with an unspecified mission, in the same sense as filling up a car fuel tank, is still in the future though the mission profiles for all of the ISS related vehicles appears to have to change in response to events. I'd be interested to read what other methods are used.

We can use light refraction angel from liquid surface of fuel. Assumption is that the space ship is having constant velocity..... Liquid fuel always settle to the opposite side of tank (which will be tank bottom) w.r.t moving direction.

Not the answer you're looking for? Browse other questions tagged spacecraft fuel sensors or ask your own question.

3
How is fuel measured in spacecraft?

17
Can solid fuel leak?
8
Proportions of a reentering spacecraft as compared to fuel mass
1
Chemical Fuel Improvements
14
Flying fuel tanks! Which deep-space spacecraft had the largest fuel mass fraction?
3
Nadir sensor for a spacecraft attempting to land
10
How are fuel/hydraulics pipes coupled in spacecraft?
3
Can pyroxene and other silicon compounds be used as a theoretical spacecraft fuel?
5
In situ Fuel in LEO / MEO