What does the phrase “topological point of view” mean when applied to two-body orbits in this context?

A recent question includes the passage:

What is does the phrase "topological point of view" mean when applied to two-body orbits in this context, lunar or otherwise?

I know that topological concepts such as bifurcation are important in three or more body orbits (e.g. this stuff or the image below from here), but in this context it's just a (presumably) massless body in orbit around another rigid body. 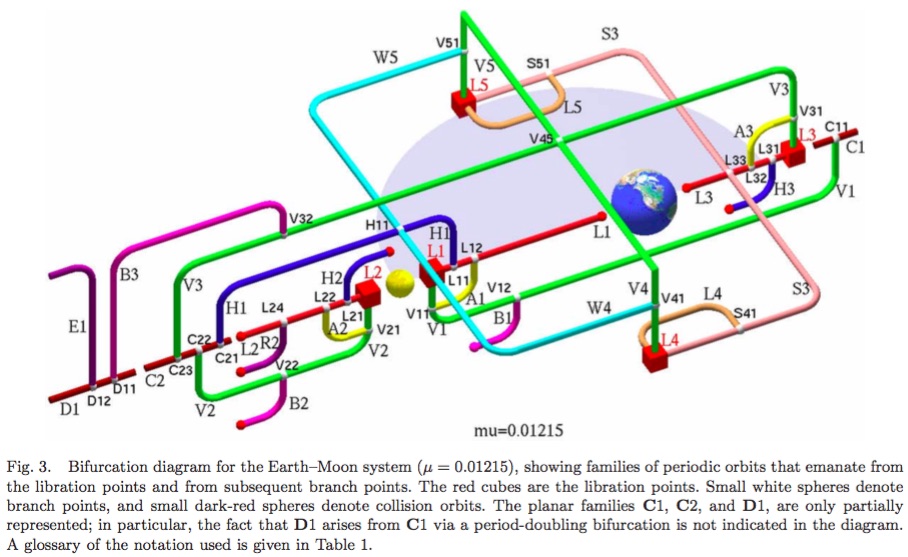 Start by considering a large mass, spherical of radius $r$ or point, at the origin. Note that at perihelion or aphelion the relative motion of an orbiting object is tangent to the center of mass.

Any orbit with distance $A > r$ from the origin to aphelion and distance $P$ to perihelion is characterized entirely by a point on in the unit sphere (corresponding, say, to the point of perihelion) along with a point on the unit circle (giving the direction of tangent motion at perihelion).

We can therefore think about the set of $A,P$ orbits in terms of unit vector fields on the unit 2-sphere. More generally, the set of orbits with energy $E$ and perihelion distance $P$ will have the same property.

For a spherical center mass the two are completely equivalent. If the central mass is not spherical, there is still an equal-energy surface $S_E$ of perihelia. $S_E$ will no longer be spherical but will (usually?) be topologically the same as a 2-sphere.

I no longer believe it is reasonable to think in terms of perihelion and aphelion, since that assumes an orbit in the first place. We can still think in terms of tangents at some equipotential surface, but have to allow for the full range of kinetic energies (speeds). We are thus characterizing a set of geodesics by a point on the sphere plus a tangent vector, rather than just a point on the unit circle.

Not the answer you're looking for? Browse other questions tagged orbital-mechanics mathematics or ask your own question.

5
Do all rigid bodies of radius r have at least one stable orbit with perihelion p such that 2r > p > r?

2
What do the green lines represent in this Lagrange Point animation?
5
Do all rigid bodies of radius r have at least one stable orbit with perihelion p such that 2r > p > r?
3
What is the angle between two orbits in the equatorial plane?
10
Does the “17” really mean anything with respect to GNSS orbits being rational factions of a sidereal day?
1
What do the axis labels mean in this plot (apparently from Sutton 8th edition)?
0
Does the arrow in this STEREO trajectory animation point heliocentric prograde, or towards the Sun?
3
What does the term “libration point gateway” mean?