How does Soyuz detect the ground to fire its retro rocket at the end stage?

Is there any paper/reference describing the full entry descent and guidance algorithm and sensor suite used in Soyuz?

If Soyuz uses the sonar principle (just guessing), then one can't use Soyuz to land on the Moon.

If Soyuz uses a laser altimeter, then at such low altitude the time to return will be too small. I wonder if a laser altimeter can detect such resolution. Even if it does one will be pushing the sensor to its limits. Not a good idea.

If Soyuz uses a stereo camera, then one can't land on night.

The Luna and Surveyor series used a single extended ground contact sensor for engine cutoff. Soyuz does not definitely have it.

So what is used in Soyuz? Is there any sensor which will be better than what Soyuz uses?

Earlier Voskhod models used a retractable metal probe, but it was unreliable, especially in windy conditions. So in Soyuz, as the other answers have pointed out, a gamma-ray source is pointed at the ground and the backscatter is measured. The instrument ("Kaktus"), was developed in the early 60s.

The advantage of using a gamma ray source rather than, for example, a radio altimeter, is that gamma rays can pass through less dense materials that the spacecraft coudn't land on. For example foilage or someone's outhouse in the Kazakh Steppe.

With the rockets fireing at only about 1.5m of altitude, it is critical that the altimeter reliably measures the distance to solid ground.

The altimeter uses a source of gamma radiation (usually - Со 60, Сs 137 isotopes). The receiver detects backscattering, reflected from the atoms inside the underlying surface. Gamma ray altimeters are used at low altitudes (meters, tens of meters from the surface). The main application is for a soft landing system for descent vehicles of spacecraft.
In particular, in the Soyuz spacecraft a gamma-ray altimeter (Cactus) is installed at the bottom of the descent vehicle and the place of its installation is marked with a radiation hazard sign.

I even read somewhere (can't find a source now) that this was the single element, which Chinese engineers were unable to create for Shenzhou spacecraft and they just purchased those altimeters from Russia

Just to add a better source: From the Soyuz Crew Operations Manual

The АКСП consists of barostatic and time mechanisms and the Гамма-лучевой высотомер (ГЛВ) (Gamma Ray Altimeter). The barostatic and time mechanisms operating according to their settings issue commands for sequential parachute deployment and for the execution of pre-landing operations in the CA. The АКСП units are located at the CA Module bottom. The purpose of the ГЛВ Altimeter is to issue the landing event signal at the altitude of 15 m (ТСЭ-4 “ПОСАДКА” (Landing) light goes ON) and the command for the ДМП thruster ignition at the altitude of 0.8 m.

At the descent final portion following the ГЛВ Altimeter commands: - at the altitude of 15 m the audio signal is switched On and the “ПОСАДКА”(Landing) light illuminates (ТСЭ-4); - at the altitude of 0.8 m 4 ДМП thrusters are fired; - manual ОП rope jettison inhibit is removed; - The система дыхательной вентиляции (ДВ) (Breathing Ventilation System) is put to operation. When landing onto the firm ground the Commander jettisons only one parachute rope. When the space-craft lands onto the water surface he jettisons the parachute completely.

They use Cesium-137, which produces low-level radiation, for the landing altimeter. 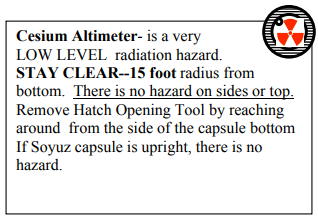 Not the answer you're looking for? Browse other questions tagged soyuz-spacecraft sensors or ask your own question.

13
Did Apollo have braking rockets for soft landing on Earth?
13
How does a gamma ray altimeter work? What kind of sensor is used?
4
Alternative to GPS navigation for vertical landing, especially on other planets
3
When did soviet capsules begin using retropropulsion immediately before landing?
9
How does New Shepard Crew Capsule sense proximity to trigger retropropulsion just before impact?
2
What are the innovative aspects of New Shepard's "retro-thrust system on the bottom of the capsule"?

26
What happens to Soyuz reentry capsules after landing?
21
Did the soft-landing rockets malfunction in the Soyuz (expedition 50 crew) landing?
6
Soyuz seat - return
13
How does a gamma ray altimeter work? What kind of sensor is used?
4
Landing shock of Soyuz spacecraft?
3
Seating in Soyuz 18 capsule
2
Why are these Soyuz Astronauts/Cosmonauts wearing sun glasses and a blanket after landing?
2
RF information for ship detection
6
Soyuz flight books?