What is the general shape and size of a space probe, and how are they launched?

I am totally blind, and I haven't felt any models of space probes, so I have no idea how big they are, what their general shapes are, or what kind of launch systems they use. I'm assuming space probes are not as big as space capsules, so they wouldn't need powerful rockets to get them off the ground. Can the process be explained in detail as to whether they use a launch pad or not? Are there any audible sounds of space probe launches?

I assume you're talking about space probes that go to other planets.

There have been quite a few of those, and they all look different. So I'm going to give an example: Voyager.

Voyager's shape is dominated by its antenna. It has a parabolic dish, 3.7 m in diameter for communication with Earth. Behind the dish, you have the main body of the spacecraft: a ten-sided box about 1.8 m wide and 0.5 m high. This contains the computers, radio, thrusters and fuel supply.

On one side of this box, there's a short truss (about 3 m long) with a set of cameras on the end, and some other instruments in various places on the truss. The cameras are on a movable platform, so they can be pointed independently of the spacecraft.

On the other side of the main body, there's a much longer truss (12 m) with one instrument on the end: a magnetometer.

Below this long truss, you have the radiothermal generator. This is a cylinder, about 2 m long and 0.5 m wide with fins on its sides. This supplies electrical power and heat to the spacecraft.

Then there are 2 long antennas (10 m) pointing in the opposite direction of the dish.

Most of the spacecraft is covered in black cloth, this is insulation against the cold of space.

Most interplanetary spacecraft are similar: a central box structure that holds the instruments, a large dish antenna, and smaller stuff sticking out at various angles.

Despite being small, these spacecraft are launched on large rockets (some of the largest available at the time) because they need to move fast to get to their destination in a reasonable time.

Here's a short clip of the Voyager 1 launch, the only one with decent sound I could find. In it, after the initial seconds of silence, we hear the launch of the rocket containing Voyager 1 as it lifts off the launchpad.

A very rough and quick overview:

Early satellites like Sputnik looked a metal ball with a few stiff, long wires (antennas) poking out. For Sputnik in particular, if the ball were at the tip of a pyramid, its four antennas would be pointed down the pyramid's edges toward the base.

Often, the body of modern satellites looks like a geometric primitive: a cylinder (can), multi-sided prism (like a cylinder with multiple straight sides instead of a single curved surface) or even just a box. Some have more complex shapes but still look roughly like a cylinder or box. As far as I know, these are often as big as a refrigerator or even as large as a car. They often have two or more planes sticking out on opposing sides: the solar panels. These panels are often quote large and can span wider than the satellite's main body. Sometimes the panels are single pieces, often they are multiple joined segments and folded during launch.

Deep space probes usually have a large dish antenna which may be as large or even larger than the rest of the probe's body. Like Hobbes described in more detail, the Voyager probes look like they're mostly a large dish antenna a 10-sided-box behind, which additionally have booms/truss with a few instruments.

There all all kinds of shapes and sizes. The two big things in most cases are the solar panels and antenna, but there are other factors. I've included a number of images, and will try and describe some of them. Source

Most satellites are a box with some solar panels attached to them. The box can be a number of shapes, some are rectangular, some circular, hexagonal, or other shapes. Many of these are gold covered, which helps with thermal management, but not all are.

The solar panels are attached loosely to the main body of the spacecraft to allow them to rotate. They are usually long rectangular strips extending from the main body, but in any case will be thin. The area of these depends on the location they are going, they tend to be smaller for close missions, and much larger for further out ones. Dawn and JUNO are the largest. Not all missions have solar panels, in particular the ones going out to the distant parts of the solar system, where they tend to rely on nuclear power in the form of Radioactive Thermal Generators (RTGs)

The other major item of most space probes is the dish antennas, which are something of a spherical shape, with only a small portion of the sphere included. These usually have an antenna sticking out of it, with one or more braces to hold the antenna in place. These antennas tend to be long vertical shapes.

Other things that can stick out are magnetometers and boons to hold other sensitive electronics. These tend to be similar to an antenna boon, 3 posts with thin bars between them in a triangular shape.

Landers are similar, but also contain something to soften the impact, like landing legs, which are similar to chair legs, although they usually have thin circular pads at the bottom to prevent sinking in the dirt. 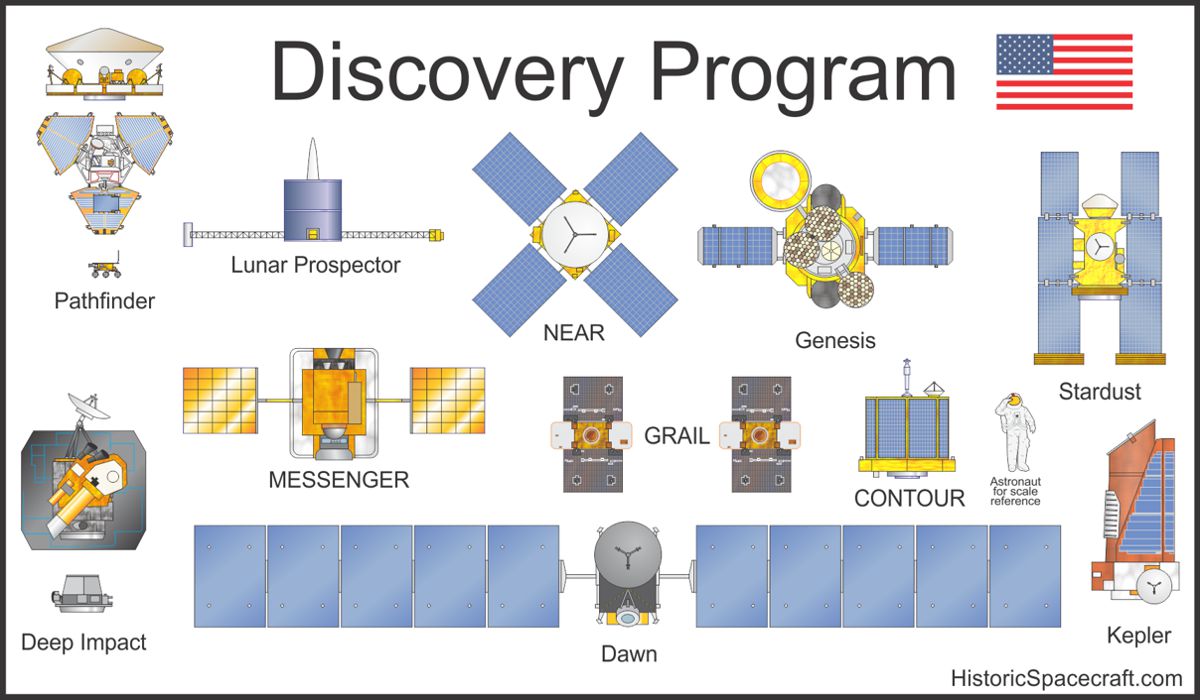 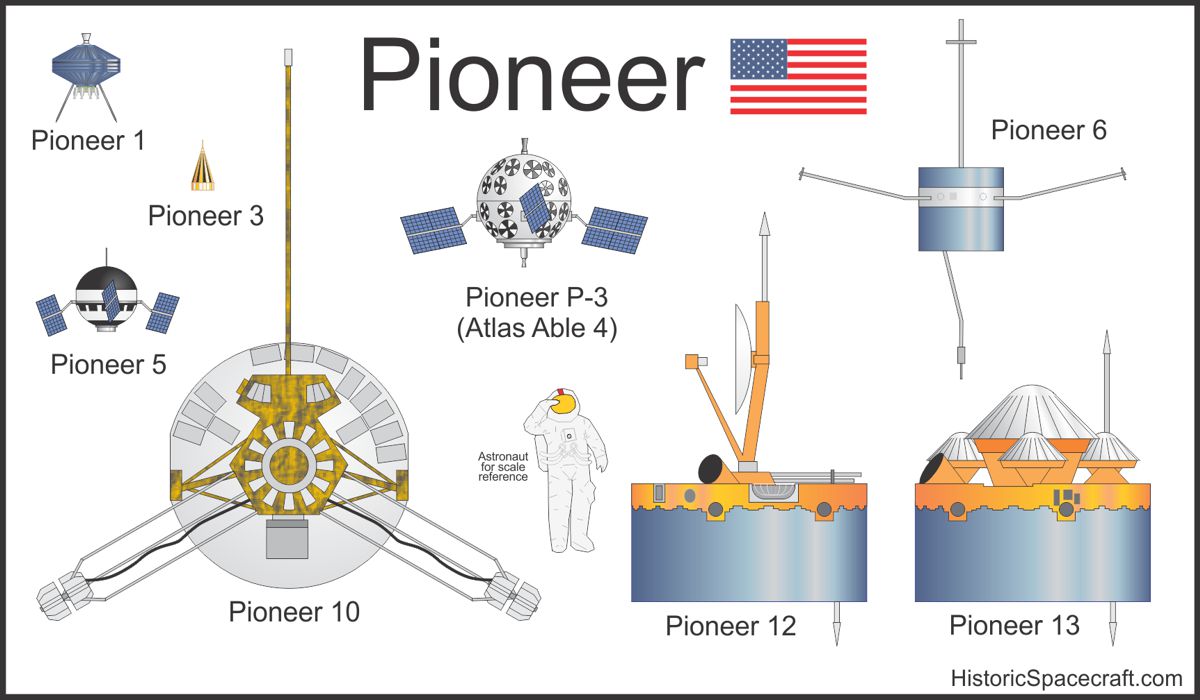 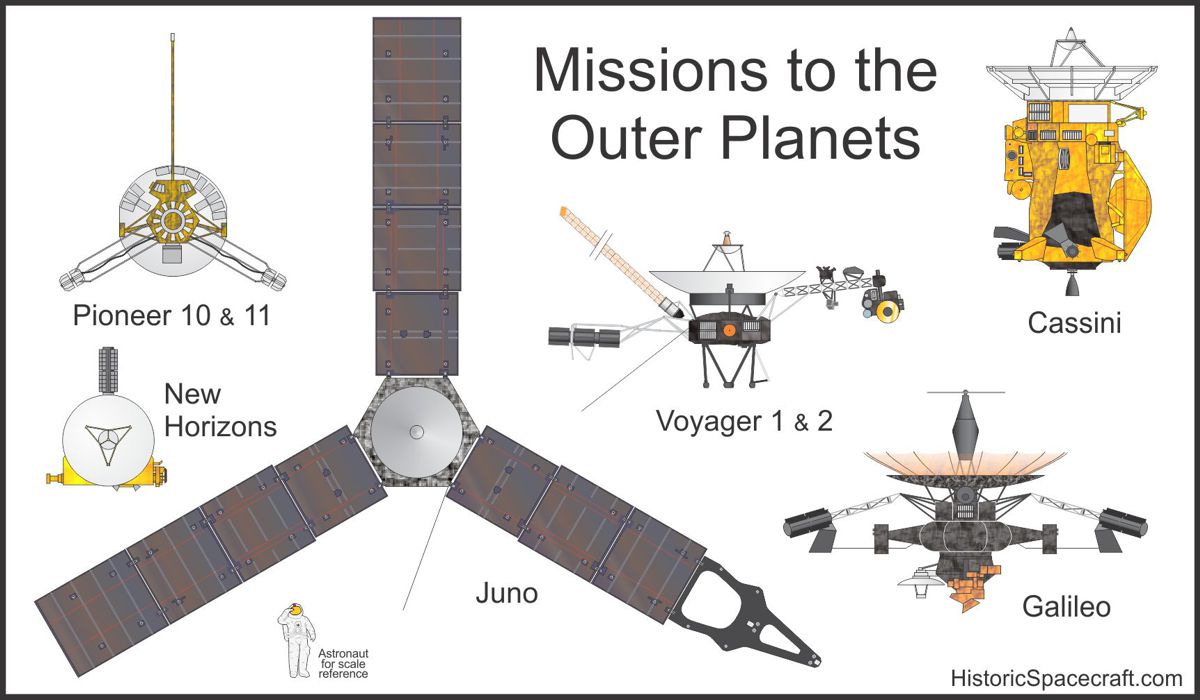 I'm assuming space probes are not as big as space capsules, so they wouldn't need powerful rockets to get them off the ground.

Interplanetary space probes vary a lot in size. Larger and more capable missions like Cassini-Huygens or Mars Science Laboratory are in the 5 ton range, which is substantially larger than early crewed space capsules like Mercury or Gemini; nearly as large as a modern Soyuz spacecraft. Moreover, they're going beyond low Earth orbit, so they do need very powerful launchers.

The Soyuz booster masses about 300 tons, while the interplanetary Titan IVB that launched Cassini was about 3 times that mass. Smaller modern probes use launchers like Atlas V which are similar in size to the Soyuz booster.

Some space probes can be bigger than manned spacecraft - if I am not mistaken, the Cassini probe to Saturn was about the size of a school bus.

Probes are launched on rockets, sometimes the same rockets used to launch manned spacecraft, so launch pads are involved, and yes, launches are very loud. The probes themselves are typically not very aerodynamic, so they are encapsulated in a streamlined fairing for launch. Once out of the atmosphere, the fairing is jettisoned.

Very large probes may have parts that can be folded up to so they can fit into the faring, like the solar arrays or the main antenna. The Galileo probe to Jupiter had a large parabolic antenna that was supposed to unfold similar to an umbrella, but jammed and could not be unfolded completely. The James Webb Space Telescope main mirror is a mesh of hexagonal mirrors that can be folded up for launch.

The main probe bodies tend to be simple shapes - boxes, cylinders, trapezoids. No two really look alike (except for the Voyagers). The New Horizons probe to Jupiter was roughly the size and shape of a grand piano. They may have openings for thrusters, cameras, or other instruments. Power may be supplied by large flat solar panels or by cylindrical RTGs on a boom extending from the probe. They'll usually have a large parabolic antenna (somewhat umbrella shaped) attached somewhere to the main body. Usually smaller instruments are attached to the outside of the probe body. Sometimes instruments are mounted on the end of a long boom to avoid interference from the probe or RTG if it's using one.

Not the answer you're looking for? Browse other questions tagged spacecraft probe or ask your own question.

29
How small could an orbital rocket be?

10
Alternative data transfer channels for inter-stellar probes?
5
What types of activities are performed when managing a probe in transit?
17
What are quaternions and how are they used to represent spacecraft dynamics?
0
What are "Tundra missiles" and why are they so hard to detect?
9
Why aren't there many audio soundscapes recorded within the spacecraft?
8
Have there been any probes launched that were actually clusters of probes?
13
How does a space probe differ from a satellite in terms of materials used and size?
7
What are these Space Shuttle cockpit elements and what are they for?