Why is it so hard to figure out if Voyager 1 has left the solar system? 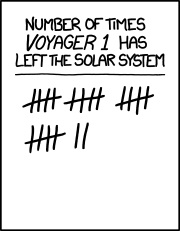 I recently noticed the comic above, and wondered what, exactly, makes it so hard to tell whether Voyager 1 has left the solar system. I can think of three reasons:

None of the above.

The Voyager project science team is in agreement over what is meant by leaving the solar system, knows exactly where the spacecraft is, and has been very careful what they say about all this in their declarations over time. Nevertheless the news reporting would simplify the findings to something like "Voyager 1 has left our Solar System!", since that's easier to understand than "The Voyager 1 spacecraft has reached a distant point at the edge of our solar system where there is no outward motion of solar wind." or "The stagnation of this solar wind has continued through at least February 2011, marking a thick, previously unpredicted 'transition zone' at the edge of our solar system." So there have been many news reports of Voyager 1 leaving the solar system over the past three years, when in fact the actual press releases were rather more specific. In their September 12, 2013 press release, they said for the first time "Voyager 1 Has Entered Interstellar Space".

On the 25th of August, 2012, Voyager 1 measured very abrupt changes in the local environment. This was in fact Voyager 1 crossing the heliopause. In a single day. Unfortunately, they only saw two out of the three expected signatures of having crossed the heliopause. So being the conservative sorts they are, they did not declare a crossing.

The kicker was that the magnetic field direction only changed by 2°. They were expecting a much larger change, based on models of the direction of the local interstellar magnetic field. This was a puzzlement. Since they did not have a direct measurement of plasma density (due to the failure of an instrument much earlier in the mission), the science team was left in a state of uncertainty about whether or not they were really in interstellar space. From an August 2012 press release:

Scientists eagerly awaiting the entry of the two Voyagers into interstellar space have recently seen changes from Voyager 1 in two of the three observations that are expected to be different in interstellar space. The prevalence of high-energy particles streaming in from outside our solar system has jumped, and the prevalence of lower-energy particles originating from inside our solar system has briefly dipped, indicating an increasing pace of change in Voyager 1's environment. Voyager team scientists are now analyzing data on the direction of the magnetic field, which they believe will change upon entry into interstellar space.

By sheer luck, a large coronal mass ejection from the Sun tickled the plasma around Voyager 1 a few months later. The resulting ringing allowed them to indirectly measure the plasma density, which matched what was expected for the interstellar space in the vicinity of our solar system. They were able to find earlier, weaker oscillations, extrapolated back, and found that the density increased very rapidly in, you guessed it, August 2012. That provided the confirmation they were looking for.

In short, there was a very sharp change when crossing the heliopause. The determination that that really was the heliopause was delayed by an unexpected approximate alignment of magnetic fields.

Basically, because there is no read ahead. What I mean by it is that Voyagers were never designed to make measurements of particle density, their magnetic charge, temperature and velocity with any instrument ahead of its path or even around it, so the spacecraft would first have to get there, do measurements in situ, and not detect any significant change for a long time so we could say with any degree of certainty that the last change detected was indeed due to crossing over the heliopause, where the interstellar medium pressure prevails over the solar wind of the Solar system.

But that is not all there is. You see, the Voyager's plasma instrument stopped working around the time it flew by last planets back in 1980, so any of the measurements of the pressure of the interstellar space on our heliosphere could only be inferred indirectly through measuring magnetic field, or more precisely measuring magnetic orientation of the extremely tenuous particle density medium (we're talking of up to a couple of particles in a cubic centimeter), as has Mark Adler already answered in one of his previous answers.

To put this into a perhaps easier to understand analogy, imagine you're on your bicycle pedalling through a fog. You can't see ahead at all, because we've tied your eyes so you'll be our Voyager 1 trying to detect the heliopause, or in our case, where the city fog clears and you've entered a different, countryside fog. You have never before been to the countryside, so you're not exactly sure how it will feel like getting there. You've been doing fairly good for a while, sticking your tongue out and detecting humid air, got a fair impression of its temperature, velocity, and so on. You're fairly confident that if you entered a different fog, you'd be able to tell that by some of your sensors. Its temperature might change, or the density, velocity, wind direction, and so on. But to make matters worse, just as you started approaching the city suburbs, your tongue went all numb, so all you were left to use is your nose, and hope the rural countryside fog will smell slightly differently than the city one does. You've detected some change, or at least you thought you might have, but did you leave the city limits already, or did you just pass a rather stinky dumpster? You press on, and for a while you don't smell anything. Is that it? You press on. After a long while, you realize that the smell didn't change at all, so you start believing you're already at the countryside. But can you be sure?

This is about why it's not easy to determine when exactly did (if at all) Voyager 1 leave our Solar system, and why NASA believes this time it really did back in August 2012. They didn't detect any significant change in magnetic orientation of the medium the probe is going through now in a good year. Now, I've again said it, didn't I? I've said if it at all did. Why?

Well, you see even though I personally have no doubt that it did leave our Solar system and entered the interstellar medium, the area of our Sun's influence isn't constant and this area would inflate and deflate like a balloon due to solar cycles, which is about 11 years long periodic change in Sun's activity. Solar maximum when the Sun is the most active, and Solar minimum when its activity subsides. Now, Voyager 1's velocity relative to the Sun is roughly 17.26 km/s, but the fastest solar winds can reach velocity of 750 km/s, which is faster than the solar escape velocity of 618 km/s. We could say, in a sense, that our Solar system is breathing, the Sun is inhaling and exhaling. Increased activity produces faster solar winds and they reach escape velocity, inflating the heliosphere. And there's the unpredictability of the density of the interstellar medium as our Solar system moves through it. We know it's not uniformly dense, and we call areas with greater density our local interstellar clouds: 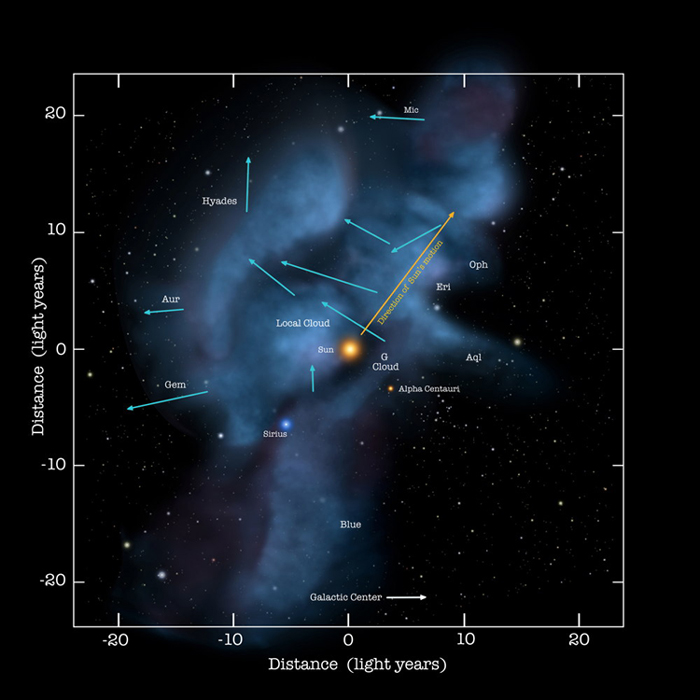 Any change in density our Solar system moves through could also decrease or increase the influence area of our Sun. The truth though is that we don't know with what speed these heliosphere inflations and deflations happen, how much they vary in size, or how frequently the interstellar medium density fluctuates, so it's hard to predict if Voyager 1 could eventually be caught up again by the influence region of our Sun and overtaken by the fastest of solar winds, having it go through it all over again. But this is another reason why it is so hard to figure it out if Voyager 1 left the Solar system. The heliosphere isn't a static point in space. So this question isn't easily answerable with any of the options you gave in your question. In fact, I would lean towards saying neither are the most responsible for why it is difficult and there are other factors we need to consider, such as what sensors Voyager 1 still has left to its disposal, and dynamics of Solar and interstellar weather.

It is number 1. No one entirely knows where the Solar System ends, and interstellar space begins.

Or put another way, this is the first time we have had a chance to look at conditions that far out, and they are constantly revising their ideas of of what is out there, and where it ends.

The data from Voyager keeps coming in, and it is changing the definition of the edge of the Solar System.

Not the answer you're looking for? Browse other questions tagged probe voyager solar-system or ask your own question.

10
Does the Heliopause really exist?
6
What is the largest body in the solar system we could meaningfully and accurately adjust the orbit of?

12
What is the first non-solar-system object Voyager 1 will run into?
3
Does Footage from Another Planet or the Outskirts of Our Solar System Exist?
5
Is it pure luck that the voyager 1 survived to travel beyond our solar system in interstellar space?
1
Can we get different images of the Milky Way? Or solar system?
48
Why were the Voyager spacecraft numbered "out-of-order"?
15
What is the most fuel efficient way out of the Solar System?
0
How does the orbit of the Voyager and New Horizons probes manage to get into interstellar space?
18
Where will the Pioneer, Voyager and New Horizons spacecraft be after one galactic orbit?
12
What image compression algorithm did the Voyagers use?