From a simulation, I obtain the instantaneous radius vector of the SFERA 2 satellite. If I compare that radius vector with the one obtained from the SGP4 propagator, I get very big differences. The following graph shows what I mean: 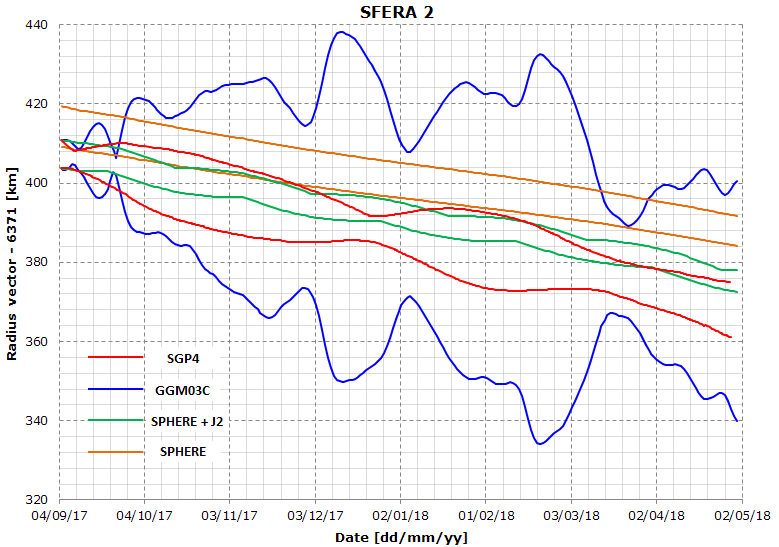 How the radius vector is calculated

The other 3 plots are obtained from a numerical propagator based on the DOPRI853 integrator. The initial TLE is the same used for the SGP4 plot (17247.56557513). The blue plot is obtained when I use the GRACE Gravity Model Version 3 Combined truncated to the order and degree 25, for the orange plot I use a spherical Earth and for the green plot I add the J2 perturbation.

Is it possible that the blue plot shows the true shape of the radius vector, while the SGP4 plot show just an approximate shape?

Just because SGP4 is indeed an approximation (a fairly low accuracy approximation) of the true orbit does not mean that the blue plot is better. I very strongly suspect that the blue plot is even worse, for a number of reasons. One is while SGP4 does lose accuracy at a fair clip, you are using each individual TLE to propagate over rather short time intervals, less than a day if I read the question correctly. This eliminates much of the error that results from using SGP4. In contrast, you are using an initial state and propagating for almost ten months. The error in that initial state will grow at least quadratically over time, and worse than that if there are losses in the system.

Another reason is that there obviously are losses in the system. This is a decaying orbit. An atmospheric drag model that yields two significant digits on the drag is a very good model. One minor solar event makes the upper atmosphere swell. The predicted drag versus the actual drag ten months out has zero significant digits.

Finally, you are using an integrator, Dormand-Prince, that is notoriously bad for orbit propagation. Bad as it is, plain old vanilla RK4 often does better job at propagating orbits than does Dormand-Prince. As a sign of this, your orbit gets more eccentric as time passes. Atmospheric drag should in general act to circularize an orbit.

Not the answer you're looking for? Browse other questions tagged sgp4 or ask your own question.

6
Can Keplerian elements from TLEs be used without SGP?