This I asked has answers about how gravity is mapped of earth using orbit data of the satellites as measured by ranging.

Using ranging one can fit the model parameters to fit the orbit as it passes through different latitude and longitude.

However, ranging is not always feasible such as in GRAIL mission when mapping the far side of the moon.

In the image below we see that GRAIL has communication with DSN and itself. What technique was used here?

Edit : I just noticed staring at image, there are 4 links among the grail spacecraft two of them are digital and two of them analog. What in the world it is depicting 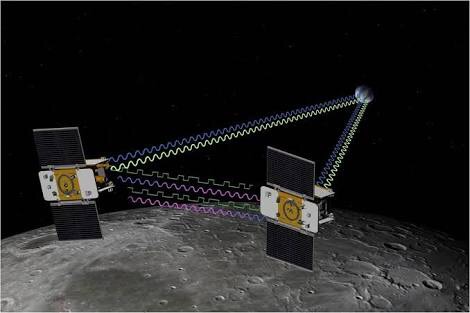 There is a version of your image with captions 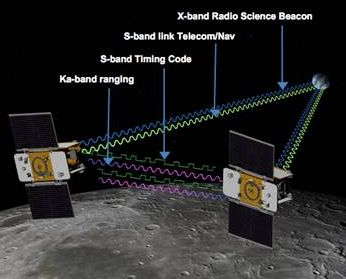 Which tells us that all of these are radio signals, on various frequencies.

The main measurement conducted is continuous, very accurate measurement of the distance between the two spacecraft. This is based on the travel time, and probably the phase of the radio signals between them, compared to the very stable "clocks" (referred to as ultra-stable oscillators) they each carry. The analogue between them is the one being measures, and the digital one is used to keep the clocks in sync and so on.

To understand how this translates into a gravity measurement, consider a region of slightly higher gravity (eg above a mass concentration). When the leading probe approaches that region it will be accelerated, and will move a little further ahead of the trailing probe. When the trailing probe reaches that region it will speed up as well and the movement will stop. When the leading probe leaves the region it will be slowed and they will move closer together. With care, this effect allows the gravity map to be recovered from ranging data.

I just found this source which gives actual accuracy for the measurement of the distance between the spacecraft of 30nm (roughly one millionth of an inch) over a five second period. This cites a technical paper (Klipstein et al) for how the range measurement works, which gives a lot more detail and explains the exact roles of all the radio signals.

According to "Operating the Dual-Orbiter GRAIL Mission to Measure the Moon's Gravity" (available at http://citeseerx.ist.psu.edu/viewdoc/download?doi=10.1.1.661.47&rep=rep1&type=pdf) the primary science data collected by GRAIL, which is the very accurate measurements of the distance between the two spacecraft made at a very high sampling rate, was downlinked in digital form from the two spacecraft to the DSN: "...all science and engineering data were transmitted to the ground twice, on two consecutive DSN passes." Although this reference doesn't specifically state it (and none of the other references I found did either), it is highly likely that the science data acquired while on the lunar far side was simply stored onboard for downlink while on the near side. Those science data were what led to the generation of the maps of the lunar gravitational potential. In the case of the GRAIL spacecraft the radiometric data generated by the spacecraft-DSN link would be much lower in quality (spatial resolution and accuracy) than the primary data, so those data would have been used for gross orbit monitoring and to provide location context for the GRAIL primary data. Are there any GRAIL operations team folks out there who could verify this?

Not the answer you're looking for? Browse other questions tagged gravity grail or ask your own question.

6
Will any near future lunar missions use GRAIL data?
8
To what celestial bodies are GRAIL-like missions planned?
3
Objects speeding up due to planets gravity?
0
Synthesizing gravity
1
Gravity Model measurement technique
2
Would more or less gravity make you proportionately stronger?
1
Does gravity affect sweating?
5
Would GRAIL be possible on more distant airless bodies such as Mercury and Callisto?