Conceptually, the lower the propellant mass fraction the better, right?

Rocket Propulsion Elements, 7th ed. Sutton, pg 30 states: "A high value of the propellant mass fraction is desirable." - I tend to disagree with this statement as described in that section because a higher value implies greater amounts of fuel are required in a given scenario. For example, if I have a final rocket mass of 500kg, and I consider the mass of the fuel to be 100kg, then my ratio is 5/6. Run the same math for 200kg, and Iget a ratio of 2/3. Well, I'd want less fuel for the same mission, so lower wins as I see it. Yet the author states on that page 30 "A high value of (ratio) is desirable". Why would that be the case?

After reading the comments I realized what I misinterpreted. Running the numbers on J's Saturn V example, it becomes obvious that as we shift Stage 1 dry mass up into Stage 2 and 3 propellant mass, we see higher values in pmf. 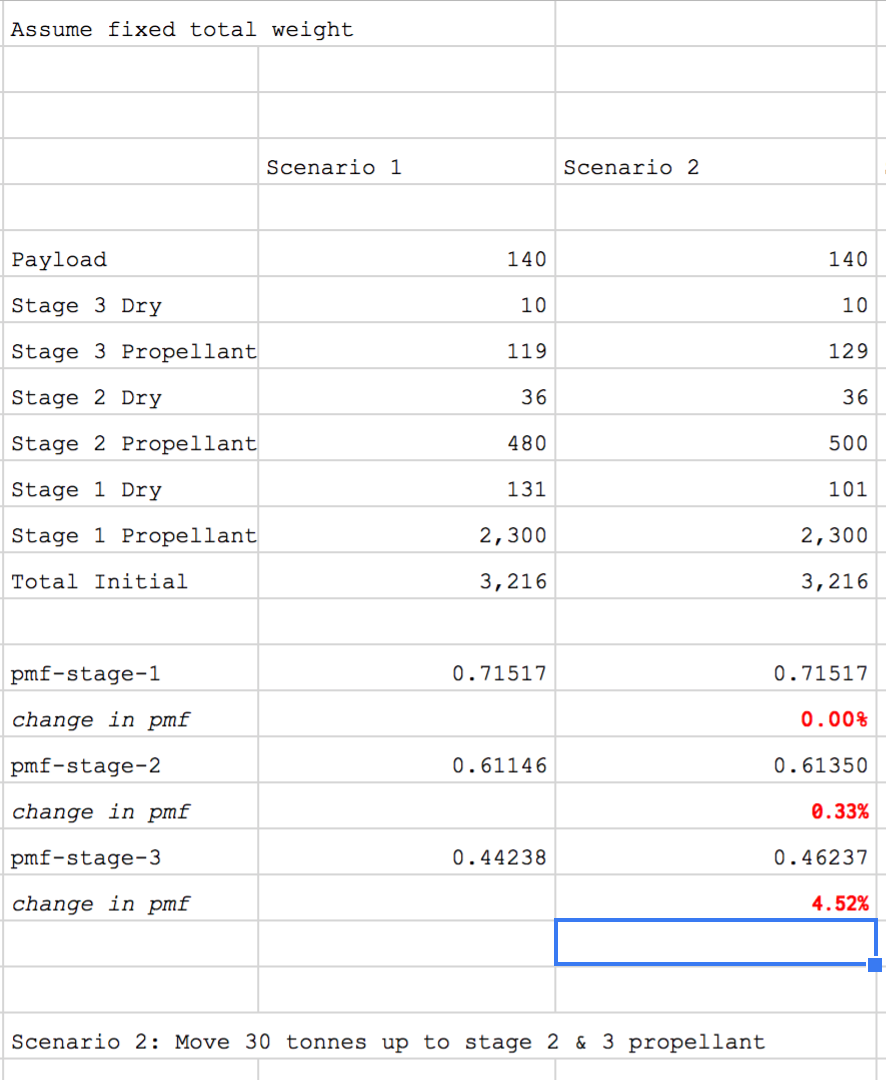 The third stage has a dry weight of about 10 tonnes, 119 tonnes fuelled.

The second stage has a dry weight of about 36 tonnes, 480 tonnes fuelled.

The first stage has a dry weight of about 131 tonnes, 2300 tonnes fuelled.

Each stage doesn't care if it is lifting payload, its own dry weight, or dry weight or fuel on the stages above it. Every bit of weight you can shed from the dry weight of the vehicle (increasing propellant fraction) at each stage means that you can move that weight up to the next stage and, ultimately, to the payload.

A perfect rocket would be 100% propellant with the payload on top. Unfortunately, we need things like engines and containers for the propellant, so the notion is that these things should be made as light as possible.

At every stage, shaving off dry weight (increasing propellant fraction) in exchange for fuel or weight budget in an upper stage always gets you more efficiency.

There are three components to a rocket (in some sense). Payload, vehicle and fuel (where vehicle includes fuel tanks, engines, etc. and fuel includes oxidiser). What you want, of course, is payload to make up as much of the mass as possible. However, given the orbit you want to reach and the type of fuel you are using, the ratio of fuel to everything else is more or less fixed by, as people have said, the rocket equation.

So, to get the maximum payload, you want the vehicle mass to be as low as possible and that's what Sutton is talking about. Every kilogram you shave off your vehicle without reducing fuel load is a kilogram you can have for payload (at least in the upper stage).

As always, when you try to figure out what is "better", you have to define what you are talking about.

In this case, the author means better as in Higher delta V

All good answers and comments so far. The question summary, "Conceptually, the lower the propellant mass fraction the better, right?" is correct if you abandon the assumption of a specified propellant and the propulsion system achieves the mission's required ∆V; but see the concluding paragraph below.

In addition to the mass ratio the rocket equation has specific impulse (essentially exhaust velocity, but for historical reasons velocity divided by Earth g) as a variable. For a specified ∆V, increase the specific impulse and you can decrease the mass ratio. As previously mentioned, this means more of the final mass can be payload, as long as the higher-Isp propulsion system's inert mass (engines, tanks, etc.) doesn't eat up all the gain in final mass.

Real mission concepts deal with this trade all the time: what is the required ∆V, and what is the best option for achieving that ∆V? I'm most familiar with interplanety robotic missions, and we frequently need to decide among cold-gas, monopropellant, or bipropellant systems. The bipropellant systems have the highest Isp, with NTO/hydrazine systems (various forms of hydrazine, such as MMH or UDMH) running in the 300-330 s range. Monopropellant systems, hydrazine again but no oxidizer, typically have Isp in the 220-230 range. And cold gas systems, such as pressurized He or N2, run far lower than monoprops. But each has its place, usually determined by the required ∆V. From the Isp point of view it sounds like biprop systems would always win. But biprop systems have somewhat heavier engines, two big tanks instead of one (which makes for a higher tank mass fraction), more propellant lines (pipes), etc., so their inert mass fraction is higher. They are more expensive, too! With current technologies, if the mission ∆V is less than ~0.7 km/s, the monoprop systems usually win out, with a propulsion system wet mass (inerts plus propellant and any pressurants used) that is less than for a biprop system. If the ∆V is really low, say a couple tens of m/s, sometimes a very simple cold gas system does best.

The conclusion is that there is no completely reliable generalization like "lower mass fraction is better." You must consider the objectives, such as the required ∆V, and characteristics like Isp and inert mass fraction of the available options. When you get the project managers involved, cost becomes a consideration as well.

How far a rocket can go is measured in $\Delta v$ (delta-v). In orbital mechanics, you reach places by changing your velocity and thus your orbit.

$\Delta v$ is given by the Tsiolkovsky rocket equation

Plugging this into the rocket equation yields

As you can see, if $m_p$ approaches $m_0$, the denominator approaches zero, and thus the fraction approaches infinity. So, the more propellant you take, the higher the delta-v!

Your misunderstanding comes from this:

The ratio of fuel to total mass is 1/5th in your example, not 5/6th. You simply inverted the ratio. This is probably due to the fact that $m_f$ in the rocket equation is not propellant mass, but dry mass

The same principle also works when you use the staged version of the rocket equation.

Since delta-v is the main limitation of spaceflight, higher delta-v is "better" in the general case. If you can re-design your rocket to have a higher fuel fraction (and not change much else), then it can either go further or can take more payload.

Not the answer you're looking for? Browse other questions tagged mass-fraction or ask your own question.

14
Why are rocket mass on the launch pad and payload mass to LEO not strongly correlated?
13
How much mass could the Saturn V rockets have landed on the Moon if nothing was coming back?
1
How does the mass of launchers change over time between ground and orbit?
7
Why will SLS Block I bring less mass to LEO than the STS shuttle system did?
14
Flying fuel tanks! Which deep-space spacecraft had the largest fuel mass fraction?
2
Problem in finding Propellant Mass using Rocket equation where total mass includes components dependant on Propellant Mass
2
mass of propellant required + rocket equation