When should a rocket be launched to reach a Near Earth Asteroid like 2001 US16?

To see the orbit of 2001 US16, go to its entry in the JPL Small-Body Database Browser.

To know when to launch to another body in our solar system, the first thing is to calculate based on the orbits of both bodies when they will be closest together. Rockets launch far enough before a close approach that will occur soon to be at the spot of the close approach when the destination body arrives. That holds true both for visits to other planets and to asteroids.

If you click on the Close Approach tab on the JPL page you linked to, there is one in 2034 when it comes to 0.03 AU of Earth. Or, there is one in April 2023 that comes to 0.33 AU, which is a lot farther, but on the other hand, there is a second close approach in September 2023. So if you are sending people, or doing a sample return mission, 2023 would be the one to go for (though it's awfully soon).

You can take that data and go to the Ames Trajectory Browser. Plugging in that NEO, and a date range that includes that close approach, gives the following result: 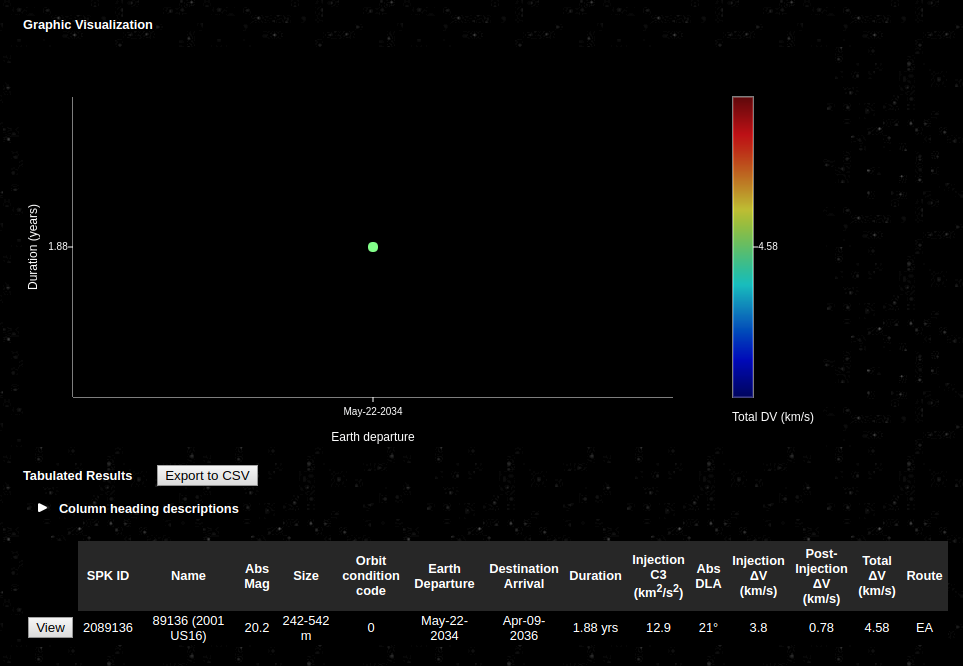 The rocket's upper stage and/or the engines of the space probe would fire at least twice while performing that delta V (which means velocity change, both speeding up and slowing down). The engines would fire to break orbit with Earth and head in the right direction (which will be a curve, not a line), and would fire on arrival to brake and enter orbit of the asteroid. But such precision is pretty much impossible, so there are corrections made mid-way on the journey once further measurements and calculations have been done. That may need to be done a few times. Also, to land on the surface would require another burn, after the vessel has gotten into orbit around it.

Now, of course, there is a huge amount of complex calculation and knowledge behind this service Ames offers. To wit:

The Trajectory Browser uses a Lambert solver to compute transfer orbits. This solver is a standard method in celestial mechanics to find Keplerian orbits that connect two position vectors with a given time of flight. This solution assumes that the only gravitational force applied to the problem is given by the Sun. For more accurate results, the gravity fields of the connected bodies plus other perturbations such as solar radiation pressure and third body gravity effects need to be taken into account.

It is necessary to know the orbits of both bodies very, very precisely in order to come up with a result that will actually get a spacecraft close enough to such a small target, with so little gravity, for it to successfully enter orbit around it or land on it. If a mission was actually going to be launched, it would use something more like the Horizons system hosted by JPL. Entering the dates for arrival at 2001 US16 there generates an ephemeris like this: 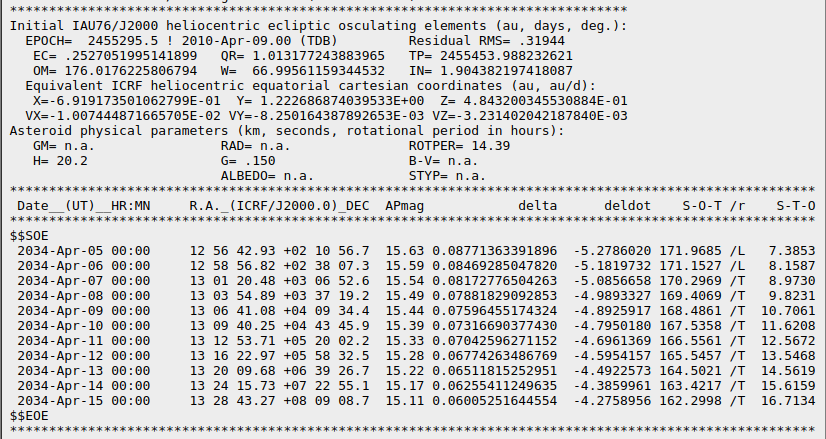 (Among other things.) But more would still be needed, so the notice on their Ephemerides page would come into play:

8
Can one put a large nickel-iron asteroid into an elliptical solar orbit that results in a soft(ish) earth landing?
4
What (actually) is a 1:1 resonance, and is 2016 HO3 in one with the Earth?
9
Why was Kepler's orbit chosen to continue to drift away from Earth?
15
Why paint only one-half of Bennu?
2
Would not getting asteroid 2013 ND$_1$$_5$ into a polar orbit be the easiest way for it to become a moon of Venus?
7
Does a change in the rotational speed of something on its own axis (rpm) affect its orbit?
3
How much less delta-v would it take to reach the Sun using Venus and Earth flyby's compared to direct?
4
How is the space probe powered to travel a huge distance in a deep space mission?
4
What does 'a nudge' mean in the context of rocketry?
7
What asteroids have the least delta-v to reach?