Has dependent one-carbon metabolic pathway been successfully linked to ocular health of astronauts?

NASA is pretty active in investigating deteriorated vision issues of astronauts that, I guess, are most frequently linked to the loss of intracranial blood pressure due to microgravity with their Ocular Health project. 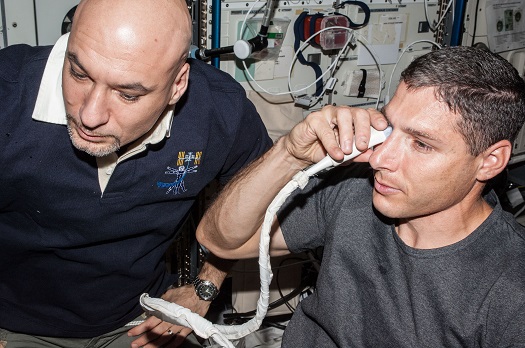 But watching NASA TV today, I've heard an interesting suggestion that the rate of deterioration in astronauts' vision might also be linked to what the interviewed scientist Scott Smith, a nutritionist and one of the authors of the recent study from NASA's Johnson Space Center's Nutritional Biochemistry Lab, called dependent one-carbon metabolic pathway. I've been curious to see what that could mean, so I've ended up on this NASA's page on New Findings on Astronaut Vision Loss:

All About the 1C Pathway

The one-carbon pathway is part of the chemical process the body uses to make DNA, or genetic instructions. The pathways are similar to an assembly line in a factory. If the pathway is not working properly, it gets behind or backs up. This is what happens if there is a vitamin deficiency. Since astronauts participate in dietary and nutritional assessments, researchers were able to rule out common vitamin and nutritional deficiencies.

Enzymes are the workers on the assembly line, and can have different forms -- little changes or variations that occur -- between individuals. These multiple forms are known as polymorphisms. As humans evolve, tiny changes in DNA occur resulting in multiple forms of enzymes. A good example of polymorphisms is blood types -- though blood is blood, there are differences that account for a variety of blood types. Lactose intolerance is another example of polymorphisms in the human body.

This is interesting because, as Smith said:

"We now need to go another step forward to assess whether it is a small piece among many others, or a large piece that is a primary cause of this problem. Not only may the results have significant implications for NASA and future astronauts, but the implications for the general population could be profound."

But he also points out that these results, while very exciting, are preliminary and said that the next step will be to directly test for the presence of enzyme polymorphisms to verify whether this relates to the vision changes. The mentioned article is from May 2012, and as we see from the attached photograph, new expedition crew members (Expedition 38) continue to perform ultrasound eye imaging tests and I imagine all kinds of other tests pre, during and post flight to support research.

My question here is, has 1C pathway been successfully linked to ocular health of astronauts or have any other findings come out of NASA's research in vision deterioration of astronauts onboard the ISS since May 2012?

Yes, the 1C pathway has been successfully linked to ocular health of astronauts, and it seems Scott Smith is still involved in the research.

[Scott] Smith says, “We found two genetic variances in the enzymes that facilitate the one carbon pathway. This may help explain why some astronauts’ vision is affected but not others.” This represents the first time researchers have identified a genetic marker associated with a spaceflight medical issue. In fact this is also the first time that NASA has used human genetic data directly in an investigation.

There was another finding as well:

Smith continues, “We found that in addition to genetics, this effect was also associated with B vitamin status. [...]"

While the genetic link has been made, the precise cause is still unknown:

[Smith:] A missing piece of the puzzle, however, is while we have shown an association between genetics and vision; we still don’t know the mechanism - or cause - of these effects. That’s one of the keys to figuring out how to prevent or treat this in affected crewmembers.

Not the answer you're looking for? Browse other questions tagged iss health research ocular or ask your own question.

8
How often do astronauts suffer headaches, migraines, etc. in microgravity?

6
Has a source of vitamin C ever been successfully grown in space?