Visibility requirement for launch; when can it be ignored (or “mitigated”), and why?

As of Thursday morning, there was an 80 percent chance of the marine fog layer exceeding the normal visibility requirements for a safe launch.

"There is an 80 percent chance that we will have visibility that low and you will not be able to see the launch," said Williams. "However, for the launch to actually happen, we are anticipating for all other mandatory range safety and user constraints that probability of violation is zero percent."

Range safety, which monitors launches to make sure they pose no threat to people or property in the area, has the ability to "mitigate" the visibility constraint, Williams explained.

"If they choose to do so, we may be able to not have to even monitor that constraint during the launch, in which case, yes, you will not be able to see the launch, but the launch could be successful and not be impacted by weather," she said. 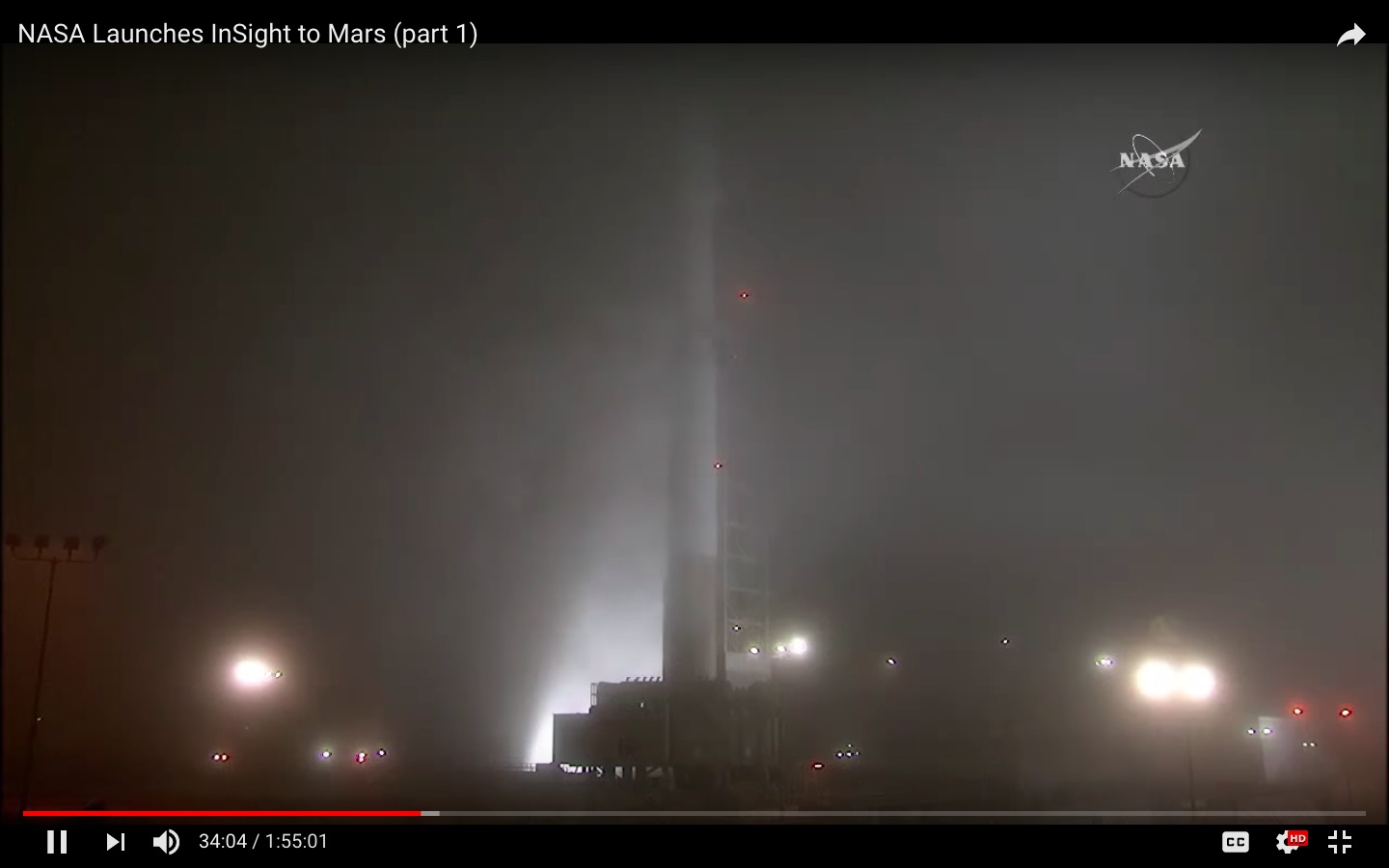 Screen shot from the SpaceX YouTube video SpaceX RADARSAT Constellation Mission. The launch proceeded successfully as did the landing of the first stage back at LZ-4 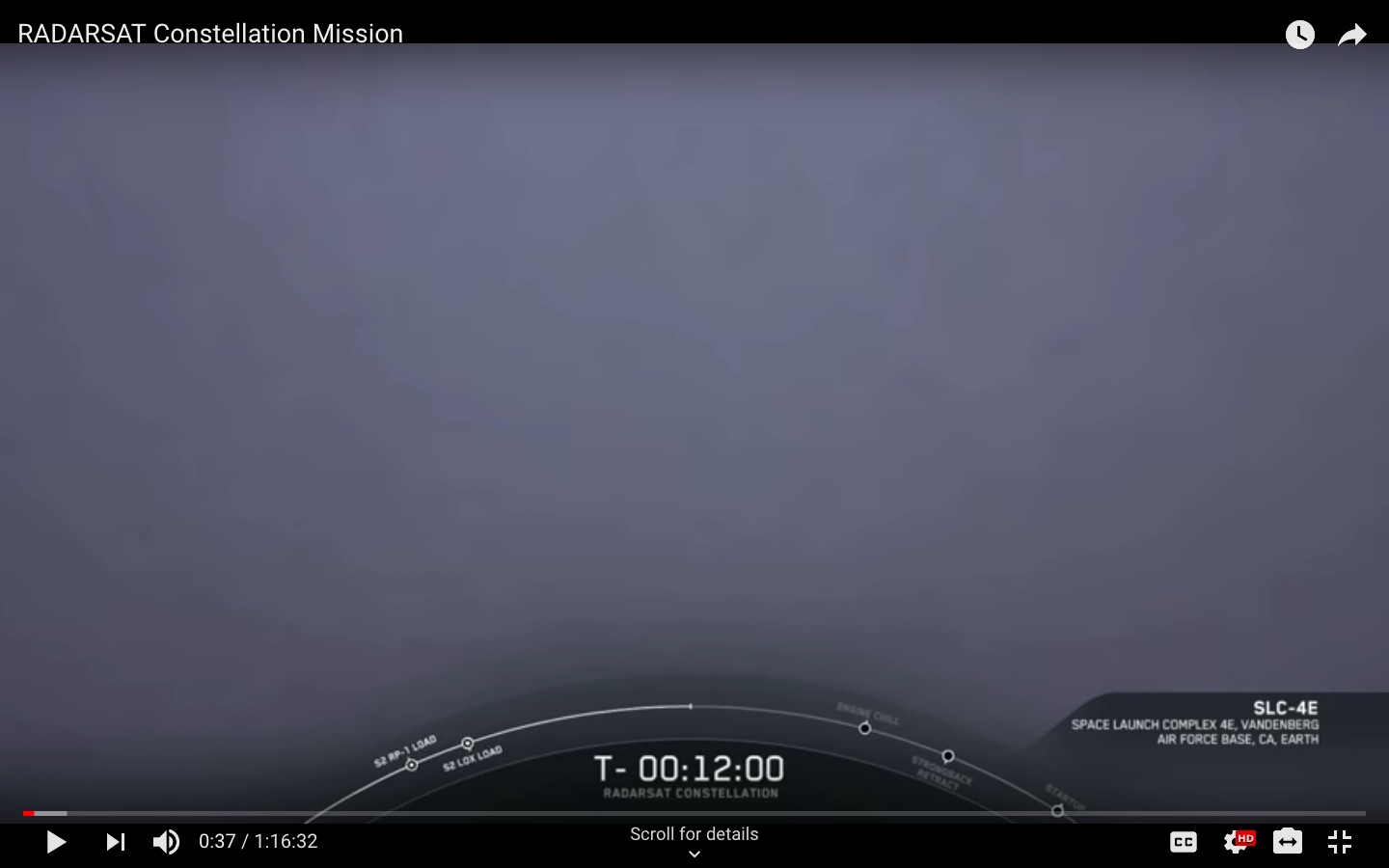 – Direct visual observation of the shuttle is required through 8,000 feet. This requirement may be satisfied using optical tracking sites or a forward observer.

– A cloud ceiling of 6,000 feet is permitted for short- duration launch windows if all required range safety instrumentation systems are functioning.

b) The vehicle can be seen by the Eastern Range airborne and/or the ground forward observers through 8,000 feet and they can communicate with the flight control officer.

A “Good Sense Rule” in effect for launch states: “Even when launch constraints are not violated, if any other hazardous conditions exist, the launch weather officer will report the threat to the launch director. The launch director may hold at any time based on the instability of the weather.”

There's also some information on visibility for return to launch site abort (RTLS) that's relevant to Shuttle and maybe some Falcon 9 missions, but not to an Atlas V launch. The more-current NASA Facts documents for Falcon 9 and Atlas V aren't as open about judgement calls, just having specific limits on minimum ceilings.

For the specific questions, in the context of these Shuttle criteria:

1) What is the nature of of a launch visibility requirement? (visible by what, from where?)

Visible by a range observer, from any of a number of possible locations

2) What is the purpose of a launch visibility requirement?

The visibility is required by for range safety operations

3) Under what conditions can it be waved?

Here, there were several ways of meeting range safety's requirements, so less visibility (though still some) was required "if all required range safety instrumentation systems are functioning". Visible observation on a clear day is pretty reliable; if you don't have that other means of observing the flight need to be reliable.

The official weather outlook issued today from the 30th Space Wing calls for an 80 percent chance of violating range safety constraints related to visibility during the launch of the InSight spacecraft aboard a United Launch Alliance Atlas 5 rocket. But Col. Michael Hough, commander of the 30th Space Wing at Vandenberg Air Force Base, said the launch team has other ways of meeting the visibility requirement.

A number of sensors and telemetry monitor a rocket before and during flight. A failure of a key piece of equipment could make visibility a firm requirement for safety reasons, Col. Michael Hough said.

That implies, but does not state, that in the absence of any failed equipment the visibility requirement is more like a guideline.

So why does range safety need to observe the vehicle? What range safety does (aside from writing lots of studies and filling out lots of paperwork) is deal with the consequences of "our rockets always blow up": sometimes the rockets have to be told to blow up before they arrive at somewhere already occupied. So range safety wants to have multiple assurances that everything is going OK. Visually observing the rocket to see how it and it's track looks is part of that. Here's an image of a tracking radar and axle-mounted camera from Vandenberg that "provides data and range safety for missile launches" (more info): 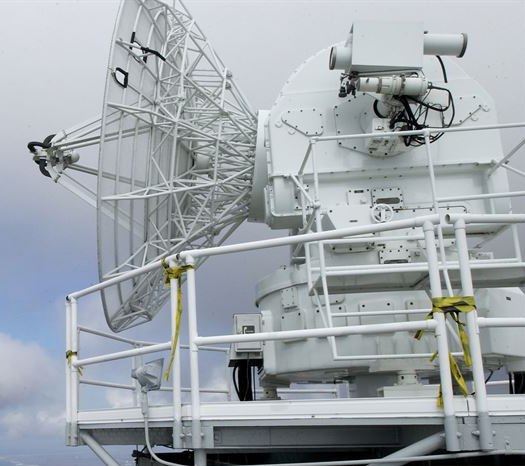 There's a nice picture of an Appllo-era observing setup here, through it's not clear the video it took was used for range safety purposes.

Not the answer you're looking for? Browse other questions tagged launch range-safety or ask your own question.

9
Did the medium range KTM tracking cameras for the Shuttle really have a “150 inch lens”?
3
Using weather patterns as a primary criteria, would South America be an ideal place to launch rockets?

15
Why don't unmanned launch vehicles include launch escape system for payload?
9
Quite some lateral wobble immediately following Antares Orb-2 liftoff. Is that normal?
4
Where can I find examples of down-range launch exclusion zones for Falcon-9 and Antares orbital launches?
9
What are the consequences for a person who violates a launch exclusion zone?
33
Why is there any launch window at all for the Falcon Heavy test flight?
9
Did the medium range KTM tracking cameras for the Shuttle really have a “150 inch lens”?
2
Deciding factors for launch site
5
What rocket system launch contained the highest amount of propellent potential energy?
6
Why was Bluegill Prime range-safetied on the launchpad?
1
If a comet-sniffing spacecraft were launched today, could it catch up to newly-discovered ε>3 C/2019 Q4 (Borisov)?