The KRUSTY reactor (the first actual test under the Kilopower project) is shown in this image. 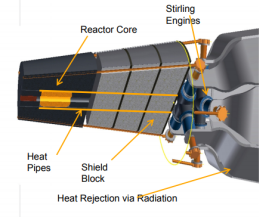 As can be seen, about half of the mass is shielding. Suppose we were using the reactor on an umanned vehicle (ion drive tour of the Jupiter or Saturn system, for instance) could that shielding be omitted? The reactor could be on a boom (or even a tether) at some distance from the spacecraft electronics, and obviously no human is going to go anywhere near it after it achieves criticality. Since power/mass basically gives you the acceleration you can achieve with your ion drive, this makes a significant difference.

The gamma and neutron fluxes from a reactor are huge, and both are difficult to shield against. Even on robotic spacecraft there are components that are sensitive to radiation damage and interference from the neutrons and gamma rays you'd get from a reactor: avionics, star trackers, imaging instruments, etc. You could probably get away with less shielding than for humans, but not a lot less.

Much of the the already radiation-hardened electronic components of the Juno Spacecraft needed to be enclosed within a thick and heavy (~200 kg) titanium vault (see also Juno Radiation Vault) in order to protect them from one or two dozen passes through the radiation from particles trapped in Jupiter's magnetic field, lasting (roughly) a few days each, and radiation damage of some components less effectively shielded is still what is likely to degrade and perhaps destroy several of Juno's instruments by the end of the mission.

This total dose is nothing compared to the radiation effects being a few meters away from a nuclear fission reactor for months or years!

To address @Hobbes's comment with an envelope-back-class answer, according to Wikipedia 235U fission releases about 200 MeV per fission event. A one-kilowatt source would then have something like 3E+13 decays per second.

That's also about 2,000,000,000 neutrons per square centimeter per second, which are can also be damaging and problematic.

I'll update this and compare with proximity to Jupiter as well as deep space background if I can find/locate all of the sources and conversion factors. While this answer makes it look easy by quoting a post-nuclear survivalist's blog about bomb shelters, this it's actually not a simple calculation to do correctly unless you do it for a living.

However, I can estimate that a person standing 1 meter from this reactor absorbing only 10% of the 3 Watts/cm^2 of gamma rays would receive about 500 Sv per day, or about 100x higher rate than the rate for "colonists" on Jupiter's moon Europa.

For more about Juno's orbit through Jupiter's radiation field, see for example: 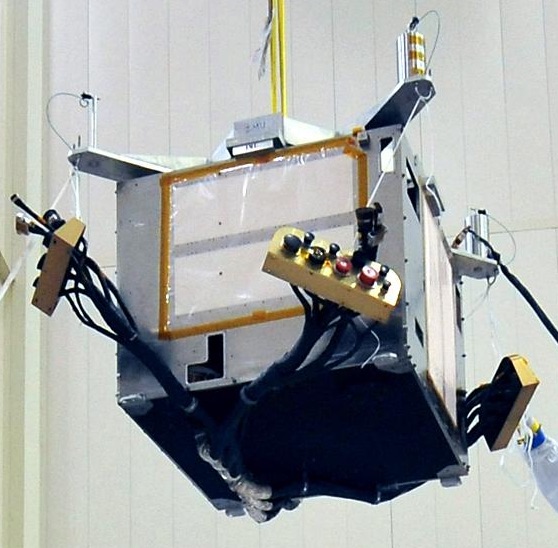 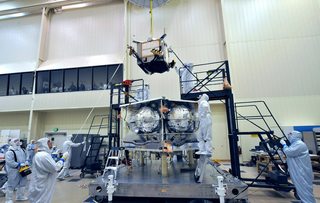 Not the answer you're looking for? Browse other questions tagged power nuclear or ask your own question.

20
If colonists burrowed far enough under the ice on Ganymede or Europa, would the ice provide adequate protection for them from Jupiter's radiation?
4
If Juno's long orbit means a lower rate of radiation damage, why the planned short orbit?
5
If Juno will experience lower levels of radiation than Galileo did why it will fail so much faster?
2
Why would Juno's originally planned orbit lowering partially mitigate radiation damage?

3
How heavy does radiation shielding have to be for a nuclear power plant on a crewed spaceship?
5
Could a spacecraft take off from Earth using nuclear thermal rockets?
2
Would it be possible to power a Venus lander using a temperature differential?
7
What happened to Kilopower generators?
21
Why do nuclear rockets (e.g. NERVA) have such poor Thrust-to-Weight ratios?
2
Using recent technology, how much electrical power could a nuclear reactor launchable by a low-level heavy-lift vehicle be developed to produce?
9
ULA's ACES upper stage with IVF - Why are they using internal combustion engines?
5
What is the relationship (if any) between NASA's Kilopower project and its request for 40 kW reactor designs?