Did the medium range KTM tracking cameras for the Shuttle really have a "150 inch lens"?

The Curious Droid YouTube video How did NASA get those great film shots of Apollo and the Shuttle? found here and linked-to in this comment contains the following passage starting at 05:26:

This piece of footage here of the shuttle Discovery at T+40 seconds is shot from a medium distance camera about 3.8 kilometers from the launch pad using a 150 inch lens with a 4,000 mm focal length as the shuttle is accelerating through 20,000 feet. As discovery goes through a 145,000 feet at 123 seconds into flight, the boosters separate, which is captured here by another 150 inch, 4,000 mm focal length lens on a KTM. The weight of the lens alone on these was about 115 kilograms, and the tracking to keep the discovery in the frame was done by a human, and not an automated system. After three minutes the job of filming the ascent was transferred to the largest telescope on the site, the permanently mounted 24-inch aperture Recording Optical Tracking Instrument, or ROTI. With a focal length of up to 12,700 mm, ROTI had enough magnification to follow the launch for up to five minutes after liftoff. ROTI used both radar assisted tracking and a joystick for manual adjustment, which had such a fine sensitivity but it could register the heartbeat of the user if held too firmly.

High quality, imaging, achromatic lenses are never 150 inches (~3800 mm) in diameter. The Yerkes Observatory's 40 inch (1,000 mm) refractor is the largest diameter refracting telescope ever built, and that was about f/18.

Even if it were a reflecting 3.8 meter diameter primary, f/1.05 would be an impressive looking instrument.

Question: What are this optical system's actual specs, such as diameter of primary lens or mirror, focal length, and number of reflecting and/or refracting elements? It sounds amazing! 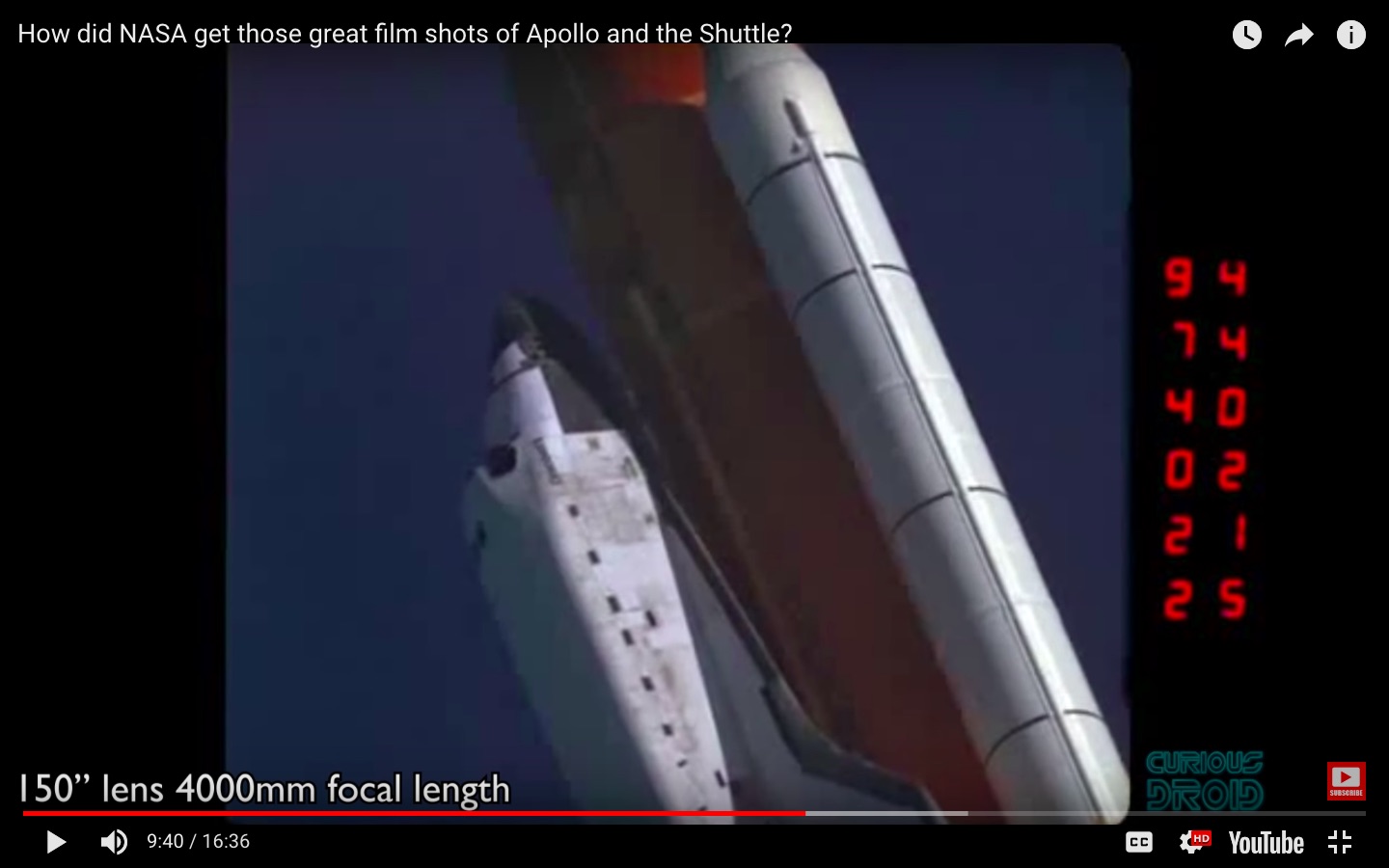 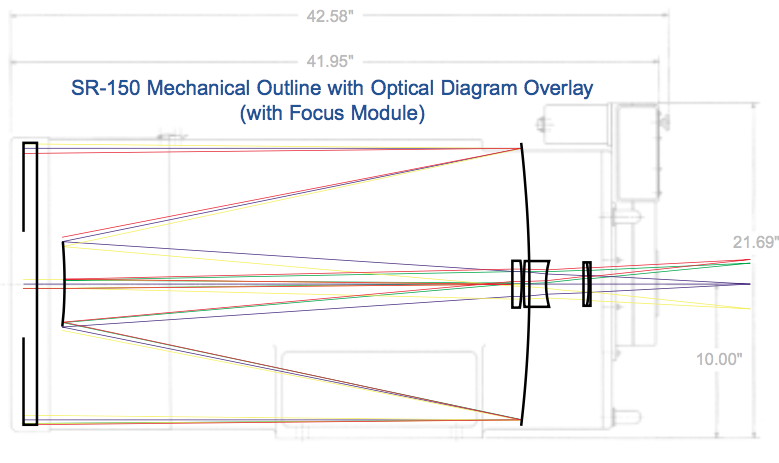 This is a Cassegrain-type lens. The lenses are installed on an L3 Kineto Tracking Mount.

A really good overview of all the photography going on during a Shuttle launch is Ascent, an hour-long video that shows samples from each type of camera. Many of these cameras are high-speed, so you get fantastic slow-motion shots of the Shuttle taking off. The narration has a lot of detail on the cameras used, and all the stuff going on in the first minute after launch.

This PDF has a map of the camera sites around the pad. 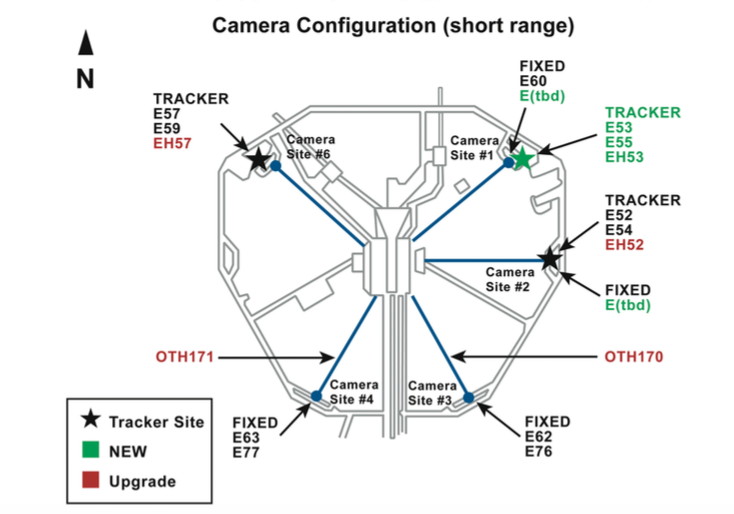 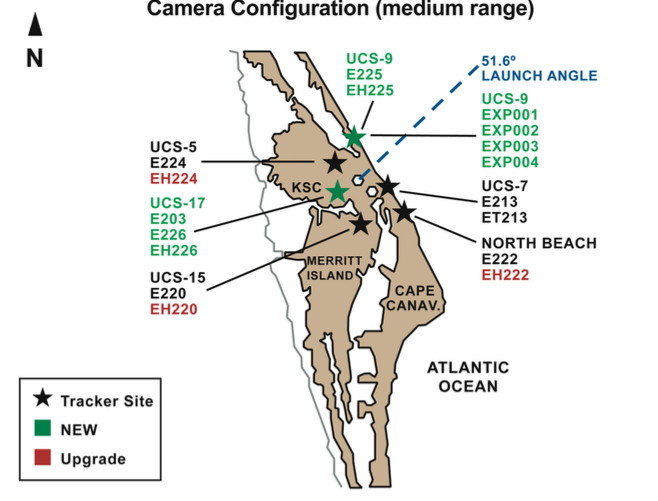 Not the answer you're looking for? Browse other questions tagged launch nasa space-shuttle photography or ask your own question.

26
How does SPACEX capture such images?
4
Visibility requirement for launch; when can it be ignored (or "mitigated"), and why?
5
What kinds of cameras were used to film Blue Origins first crewed flight launch?

16
What range of orbital elements was available for the Space Shuttle?
32
Did the Space Shuttle have "military uses"?
8
Shuttle-C: Did we make the right move?
8
For SpaceX's Texas launch site, what kind of range radar/tracking will they have?
2
Did IMAX pay to have their cameras in space?
11
Did the Shuttle payload bay have illumination?
4
Stanley Kubrick used a NASA-inspired lens to film by candlelight in Barry Lyndon, but what did NASA use it for?
5
Did the shuttle SRBs have separation motors?
7
Why did the shuttle have rear-view mirrors?