Is there a satellite that tracks other satellites?

Is there a satellite that tracks other satellites, or is tracking always done from ground stations?

Ground stations can only see a small part of the sky, so a network of stations would be needed. A satellite could be positioned to have a much wider monitoring area.

Clarification: To keep the question scope reasonable, I am asking about active, artificial satellites of Earth.

Tracking satellites and debris requires very powerful radar stations connected to extremely powerful computers on the ground, which can be augmented by some optical satellite technology.

Trying to put the whole thing in orbit is challenging. This is the Cobra Dane radar which tracks space objects down to 5cm: 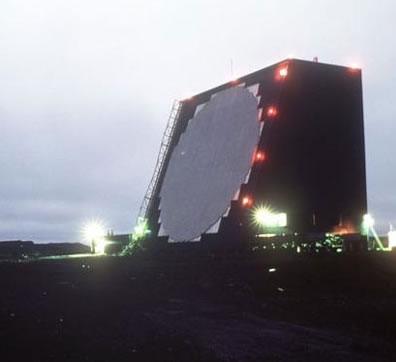 Now, that's just the phased array radar part; there's also the racks of powerful computers it's hooked up to, and the massive power supply it requires. Sending that into space would require huge technical development and a great deal of money. It's much cheaper to put them on the ground and build more of them.

Tracking objects in orbit doesn't require full coverage of the sky. If you track a piece of debris accurately enough you can calculate its orbit and you'll know where it is going to be. Build a few stations and network them together and you can build pictures like this: Satellites can augment this, but you can't put radars powerful enough for debris tracking in space for the reasons above. The SSBS is a planned constellation of satellites which will track space objects. There's been some testing apparently, but details are a bit scant. There's no network up there as yet although one seems to be planned.

Also worth mentioning is the Boeing X-37, although its missions are classified one very plausible one is tracking and spying on satellites.

There are at least a few space based sensors, although I'm having some real difficulty getting more details about them. This article mentions them in particular.

It seems these sensors are known as the Space Based Surveillance System, and have been around since 2010. Satellites allows one to manage some gaps, getting higher resolution then is possible from ground based assets. They are used to identify smaller objects near the Geostationary belt.

Other satellites doing tracking include a pair of GSSAP, which are assumed to do special looking at the distant Geostationary satellites, AFSPC-4 which seems to do classified satellite reconnaissance, and a number of government and commercial organizations that have at least some work in the field.

Bottom line, until fairly recently all tracking was done from ground based assets. These days work is being done to integrate satellites in to the detection loop to improve tracking.

The Tracking and Data Relay Satellite System (TDRSS) (unsurprisingly given its name) provides tracking. But, perhaps in a different sense that the other answers are discussing. TDRSS provides co-operative tracking of user satellites that it's communicating with by providing range and relative speed information about the user satellites. It does this by analyzing the Doppler shift of the communication links.

This document is way over the head of a mere aerospace engineer like myself but it does contain discussions of this functionality. One example from page 58 of the pdf (document page 33):

Doppler two way tracking can be provided when the DG2 carrier is coherently related to TDRSS forward service.

A satellite that could do the job would certainly be extremely useful. However these radars are extremely powerful because they must track object with very low radar cross section (either they are deliberately made that way, or the objects are very small, or both). So these satellites would have really huge photovoltaic arrays or "non-traditional" power sources, and to resolve multiple (dozens, hundreds) of objects at a time, and do scanning, they would also have to have really huge apertures compared to traditional spacecraft.

The reason is not because they are not needed, it is because it would be extremely hard to build, launch, manage, and defend a spacecraft capable of replacing many ground stations.

While the other answer shows Cobra Dane, a US defense radar stationed in Alaska which scans the horizon looking for nuclear missiles and also some satellites, in fact there are necessarily many sites world wide used by the US and certainly many sites used by many other countries.

You can get some idea by going to http://keeptrack.space/ and reviewing the sites. Radar is necessary for many objects, but for some optical tracking is also an important part of the picture. 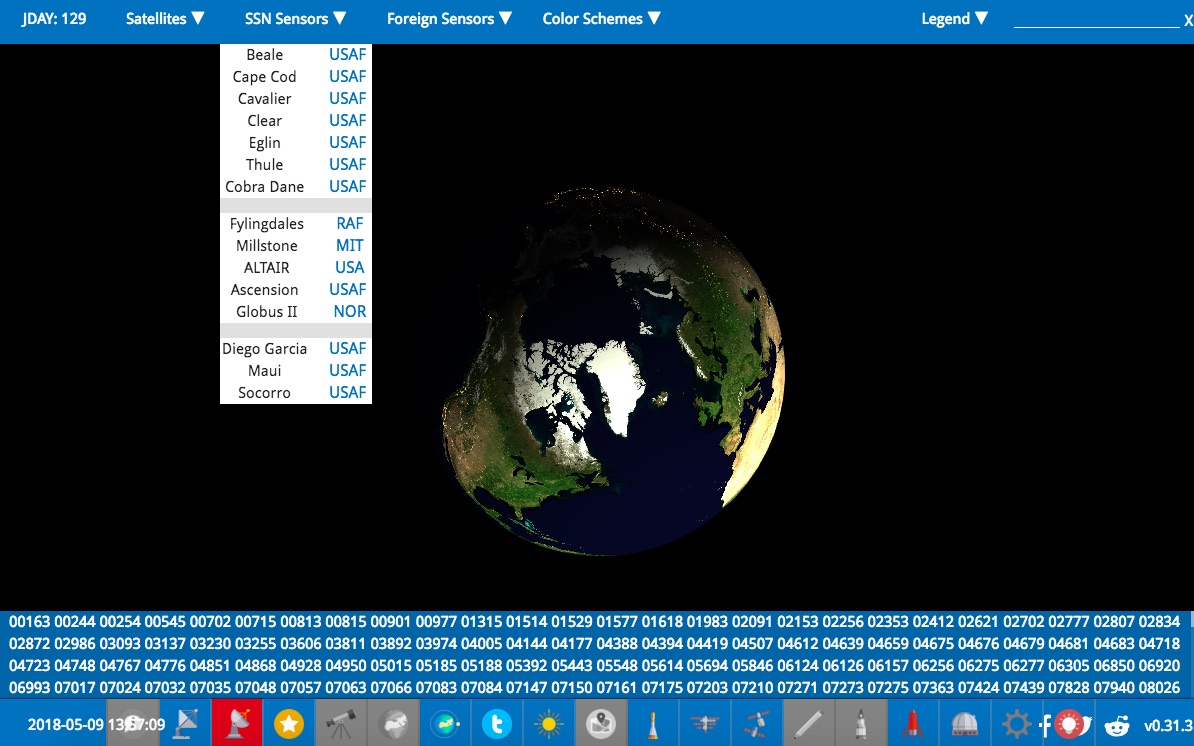 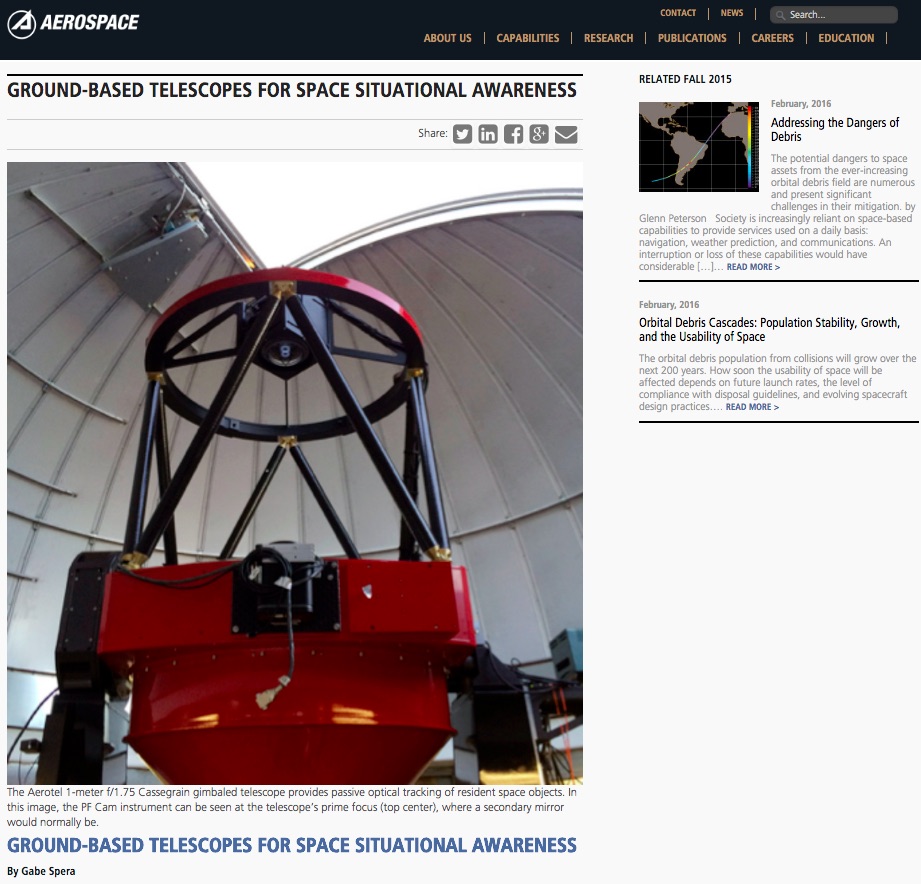 Not the answer you're looking for? Browse other questions tagged artificial-satellite tracking reconnaissance-satellite or ask your own question.

2
Why were Europe's first few satellites so stylish? Why the pronounced alternating white and black stripes?

13
Satellite tracking software
6
Have there ever been any Satellites that were hacked, is that a possibility?
46
What would be the (most difficult) challenge to make a “10,000 year satellite”?
5
Why are spy satellites in elliptical orbits?
5
What determines if a star tracker blends two stars that are close to each other?
15
Two week mark; has Mayak (Маяк) been spotted yet? Reflector deployed? Astronomy “ruined”?
4
What would be a “big picture” understanding of how the orbits of Earth satellites are monitored?
3
Does the name “corona discharge” bear any relation to the Corona surveillance satellites or is this a coincidence?
25
When was it publicly revealed that a KH-11 spy satellite took pictures of the first Shuttle flight?
2
Could any “Well-Tracked Analyst Object” turn out to be a natural object or even something else?