How can all of GOCE's pieces land in a 20 square yard area?

I was reading this article, and noticed this statement:

The chances that a chunk of GOCE or any other space debris will injure anyone are tiny, but not zero. Floberghagen said the debris will endanger about 15 to 20 square yards of the Earth's surface. "If you compare that to the surface of the planet, it's a very small number," he said.

Fifteen to twenty square yards? How can that be true? I'm assuming that by endangered, he means 'stuff might fall on it'. But twenty square yards is a twelve x fifteen foot square - not a very big place. How is it that a 1-ton satellite can deorbit, burn in the atmosphere until medium-rare, and fall for thousands of feet - and still have all its pieces end up in an area no bigger than the room I'm in right now?

I don't think that's what they mean.

What you describe incredulously is in fact not possible. The varying ballistic coefficients of the pieces would result in a spread of impacts over tens to hundreds of miles.

About 25 to 45 fragments of the 1-ton spacecraft are expected to survive all the way to the surface, with the largest perhaps weighing 200 pounds.

So in the extreme we have 45 fragments endangering 15 square yards, or about a third of a square yard or three square feet per fragment on average. So you have 45 of these little two-foot diameter circles threatened on Earth, spread over a hundred miles. That's what I think they mean. I could almost believe that.

ESA want's to spin this down to "nothing to see here, move along". The truth is that GOCE controllers haven't a clue over which area the satellite will enter the atmosphere, how long and wide of a debris field it will produce or indeed how many pieces it will disintegrate into. Those are all just somewhat educated guesstimates that they quote in several press releases, interviews of GOCE scientists by the press, and updates in ESA's blog.

They're hopeful that most of it will burn in the lower atmosphere during reentry, annihilated by heat generated from friction, with only small fragments reaching the ground. But since they lost any ability to control this as the satellite ran out of Xenon that its ion thrusters used, there's absolutely nothing they can do to control that, while the satellite is still operational and sending telemetry back to the ESA ground control.

So those calculated numbers are really just musings of scientists over what are the chances that some of these falling debris cause problems, presenting it as utterly insignificant, with the total affected area being "a very small number" when comparing that to the total surface area of the planet. Perhaps, but the comparison is really ridiculous. It's a bit like punching someone with your fist and then telling him that it's OK, because you've only hit an insignificant surface area of his entire body, and that this area gets even smaller if we calculate only the surface area of your fist's bones, where it would be most dense and impact with the strongest force. A notion so ridiculous it might not even be accepted as a valid argument in some courts, and that should say a lot.

The problem is, as usual, in what is not being mentioned. That GOCE will be a 1004 kg aerodynamically shaped kinetic projectile once it will enter the lower atmosphere. That it is streamlined with a pointed front and wing-shaped solar panels covering its body and it looks like a proper dart, almost like a planetary penetrator. It has even got a nickname "Ferrari of space" due to its appearance. Its shape might keep it in low drag nosedive trajectory and it might not even disintegrate as much as some estimate, presumably based on how well other similar size and weight satellites did, but none of them were as streamlined before (to our knowledge, there might have been some military surveillance satellites though) to reduce atmospheric drag (GOCE was always meant to orbit low enough for atmospheric drag to be significant enough they even shaped its body like wings to passively help it stabilize its attitude).

So the real question is, how come nobody mentions some sort of barometric switch or remote activated self-destruct range safety mechanism onboard, that would help it disintegrate into smaller pieces, assure it burns up completely on reentry? Could it be they don't mention it because GOCE simply doesn't have it, and they're now realizing it was particularly shortsighted of them to omit such a mechanism on a satellite that was built with as small area of friction with the atmosphere (cross-sectional area of the satellite in the direction of travel) as possible?

I guess we'll have to wait and see what really happens. GOCE's orbit is now rapidly decaying with last reported altitude of roughly 192 km high, and an expected drop by about 4 km during the next day. This rate of orbital decay will only increase as the atmosphere gets denser, and Sun being in solar maxima with its increased activity sending more ejecta our way as a product of flares and coronal mass ejections, the atmospheric drag will increase even faster.

Update: OK, this is an interesting interview with Stephen Clark, a reporter for Spaceflight Now answering a few questions regarding GOCE reentry on KPCC Southern California Public Radio (partial transcript):

Stephen Clark: ... and it's going to be falling back to Earth sometime between late tonight and Tuesday night.

KPPC: How do these bits behave? How big are these fragments?

Stephen Clark: Of course, when the spacecraft reenters the Earth, it will be disintegrating and about 550 pounds of its total 2,200 pound mass will actually survive to the surface, and the biggest fragment, that is predicted in these computer models that are specially designed to forecast these events, will be about 200 pounds.

KPPC: Oho! Anybody's been tracking where it's likely to hit?

Stephen Clark: It actually orbits over the entire planet, so it's a,... if you're in Los Angeles or if you're in Mongolia, the odds are equal.

KPPC: When will you have better idea than that?

Stephen Clark: These reentries are actually very hard to predict, in fact, you might not know when it will reenter until moments before or perhaps even they will not realize that it has reentered until they're no longer receiving signals from it.

KPPC: As far as I read, nothing of our space junk that we've created that has served us so well and it turns into junk, none of it has really hit a person or private property in, what, the last forty years of space junk?

Stephen Clark: Right, this has never happened. In fact, you're more likely to be hit by a falling meteor like the one that streaked over Southern California last night than space junk, but as more satellites reenter and more satellites are launched they're more likely to fall down and odds are, as the space age continues, that eventually something will be damaged or someone will be hurt.

KPPC: So someone will be in "the Guinness book" to be the first person injured by space junk...

KPPC: How does space junk coming back to Earth behave differently than, say, these meteors that might become meteorites?

Stephen Clark: Well, the biggest difference is that it travels much, much more slowly. It reenters the atmosphere at about 5 miles per second and some of the meteors that are coming in from deep space on much more high velocity trajectory travel sometimes at an order of magnitude faster than that.

Stephen Clark: So, in fact, it makes them more likely, for many of these fragments, to reach the surface because they're travelling so much more slowly and they're heated much less than an actual meteorite.

The interview continues and it lasts in total roughly 6 minutes, but the parts most relevant to our thread here are in the transcript. I probably need not tell anyone here that the staff of Spaceflight Now is well informed on the matter and likely with access to information we don't have. I wanted to add this here as it re-emphasizes the unpredictability of such atmospheric reentries, and that GOCE is compact and aerodynamically streamlined enough for one quarter of its mass to likely survive the reentry and hit the surface, as predicted by computer models. Where? How big of an area? Nobody knows.

GOCE entered the atmosphere on November 11, 2013. Its reentry took place over the South Atlantic, someone on the Falklands shot this photo of the reentry: 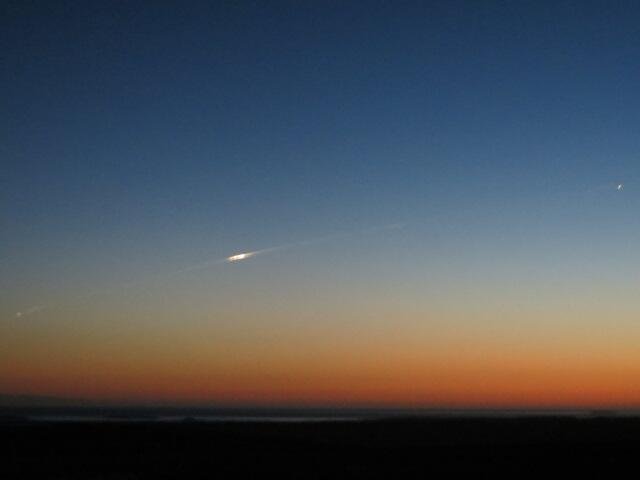 JSOC released this map of the reentry path and the debris field. 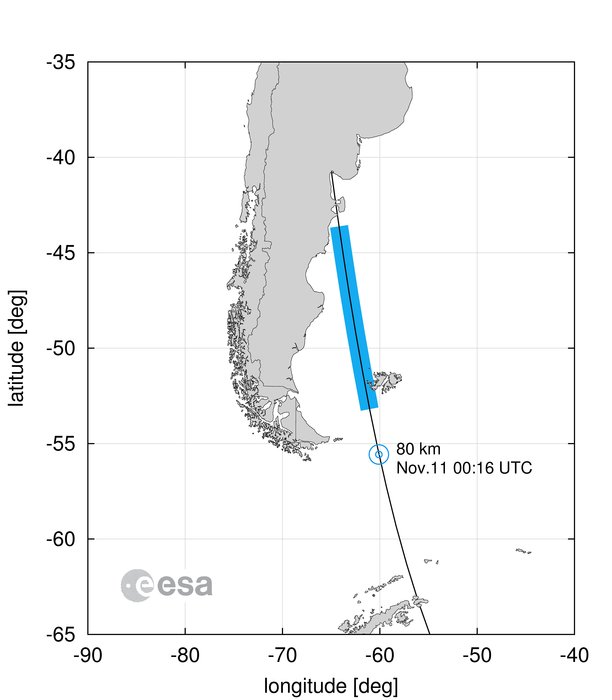 So as expected, the satellite broke up and any debris that made it all the way down ended up harmlessly splashing into the ocean. The Spaceflight 101 post-reentry report lists the decay location as "approximate", I suspect because there's no space tracking installations in that area, so no direct imaging apart from the flares photographed by amateurs. That also explains why I haven't found more about the amount of debris that actually made it to sea level (rather than the estimates made beforehand).

GOCE's outer shell was made up of thin panels that would rapidly heat up as GOCE entered the atmosphere. Its aerodynamic shape may have delayed the inevitable a bit (1), but it was going to heat up to structural failure in short order anyway, making its aerodynamic qualities irrelevant.

1: remember the Shuttle? Despite rather more refined aerodynamics and active control during reentry, it needed an exquisite heat shield to keep from being fried.

From the pre-launch reentry analysis (PDF also contains a lot of data taken in the days before reentry):

The beginning of the satellite fragmentation was predicted at an altitude of ∼ 95 km and the end at ∼ 35 km, but most of the debris generation was expected between 80 and 45 km.

The most massive fragment would have had a mass just below 95 kg There were no hazardous materials on-board and, according to ESA, the components suspected to survive reentry were a tank and the magnetotorquers. The rest of the falling debris would have been just irregular fragments.

Overall, 43 macroscopic fragments, totaling approximately 270 kg, were expected to survive reentry, hitting the ground along a 900 km footprint during a 17 minutes time interval.

A minimum casualty expectancy (Ec ) of ∼ 0.0002 was estimated at ISTI/CNR implying a probability of ∼ 1/5000 of causing 1 casualty over the whole world

Not the answer you're looking for? Browse other questions tagged artificial-satellite reentry goce or ask your own question.

6
Swarm: Is ESA launching another set of aerodynamically streamlined satellites into LEO without any self-destruct system onboard?

6
Swarm: Is ESA launching another set of aerodynamically streamlined satellites into LEO without any self-destruct system onboard?
10
How does the surface area of a heat shield impact the ideal angle of attack for reentry?
3
Can all satellites/spacecraft be used interchangeably with all launch vehicles?
3
How long can a LEO Satellite maintain its orbit if it loses all power?
1
How does DigitalGlobe plan to re-image a specific area "as frequently as every 20 to 30 minutes"?
10
Can Crew Dragon land with more people than it was launched with?
2
Can the Space Shuttle land on Mars assuming there is a paved surface for landing?
5
How might an "imminent Starlink reentry in your area" alerting script work?