What artificial satellite has the farthest orbit around the Earth?

What is the furthest Earth orbiting satellite?
What is its speed and purpose?

I don't have a list to find the highest, but I suspect that Spektr-R RadioAstron (used for long baseline radio interferometry) is one of the highest altitudes that isn't associated with a Lagrange orbit.

The Moon interacts with its orbit, so the apogee changes over time. According to the User Handbook 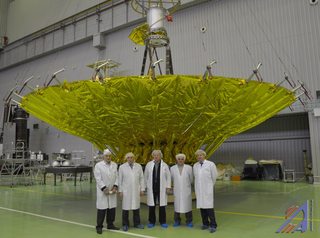 It has a very high eccentricity, so I believe there are others with a greater semi-major axis. I'm not sure which measure the question might want for "farthest out"

note: @BillGray's answer of XL8D89E is the highest and the correct answer!

I found the following "far out" spacecraft:

Here are their IDs:

I downloaded both TLEs and orbit data from JPL Horizons in order to piece together this qualitative data.

The problem is that for such high orbits, the gravity of the Sun and the Moon can push them around significantly so their orbits change over time, sometimes by quite a bit!

The all-time winner (of the four that I found) seems to be Geotail. Using historical TLEs shows Geotail's maximum semi-major axis of about 280,000 km or about 44 Earth radii, and a maximum apoapsis of over 500,000 km or about 81 Earth radii. However, according to the Japanese space agency's website (see also Wikipedia), the orbit is designed to cover the magnetotail over a wide range of distances: 8 Re to 210 Re from the earth. This is over 1,300,000 km from the Earth! In fact, some sections of that site and those of NASA/ESA suggest the maximum apogee may have been an even higher 220 Re, over 1,400,000 km distant!

This would not likely have been long term stable, and so after sampling the tail of the magnetosphere out there it was ramped down closer to Earth.

I have two plots for TESS, both current data from TLEs and future data (the big DOT) after it will use a close swing-by maneuver with the Moon and then another propulsive maneuver in order to reach its half lunar month orbit. Once that happens, TESS will be the longest period artificial satellite around the Earth, at least one with a fairly stable orbit and whose information is available publicly.

TESS has this orbit in order to spend most of its time staring at nearby stars looking for exoplanets, then it makes a close pass by Earth to download data, once every two weeks.

You can read more about how TESS' orbit works in this answer to the question TESS orbit and moon resonance.

I've put a plot of TESS' calculated orbit from Horizons below. The green, tightly repeating orbit is the Moon's. The red orbit, inclined, evolving, changing orbit is for TESS only for a few years currently in the Horizon's simulation. It's almost a miracle that it can remain so close to its orbit. Well, it's "just F=ma" (roughly), but it's still beautiful!

TESS might represent the highest non-Lagrangian Geocentric orbit that is stable over decades. It was carefully designed to have half the period of the Moon in order to cancel out perturbing effects. It is called a 2:1 resonant orbit. For orbits higher than that, lunar perturbations may become problematic.

Earth-Moon Lagrange orbits are Geocentric orbits that are in 1:1 resonance with the Moon (they are not lunar orbits). They will have their own stability issues and require station keeping. A particularly stable Geocentric orbit which is associated with the Earth-Moon Lagrange points is the Near Rectilinear Halo Orbit. Read more about it in the questions and their answers:

The Halo orbit associated with the Earth-Moon Lagrange L1 and L2 points are probably the highest Geocentric orbits that are also usefully stable. Instead of being perturbed by the Moon's gravity, they remain in resonance with it and use it to provide additional stability. However, they still require station keeping. 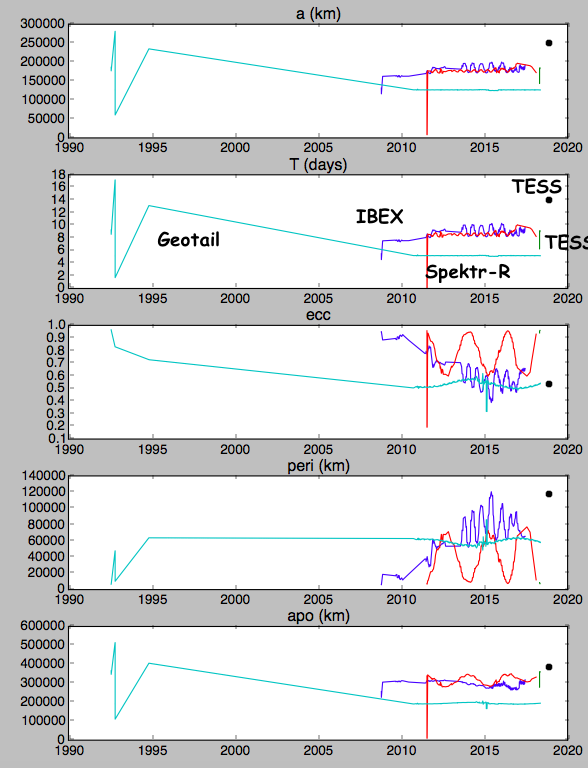 below: I've put a plot of TESS' calculated orbit from Horizons below. The green, tightly repeating orbit is the Moon's. The red orbit, inclined, evolving, changing orbit is for TESS only for a few years currently in the Horizon's simulation. 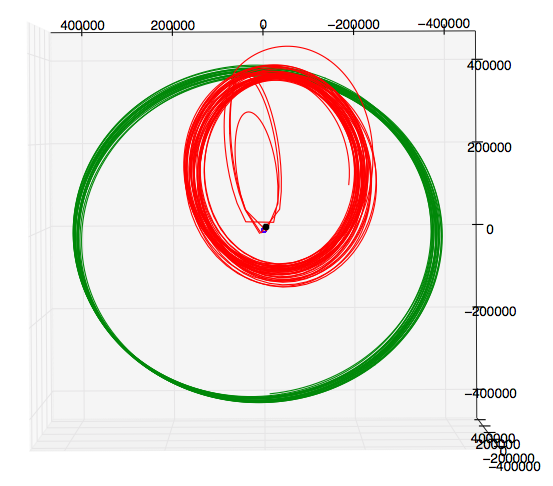 A late reply here, but perhaps it'll be of interest to those finding this post as I did. Space-Track is not especially helpful for tracking the really high-flying junk (it's not very important to them).

The current record-holder for height is XL8D89E, an unidentified object in a roughly three-month orbit found by the Catalina Sky Survey in 2015. It's probably a recovery of an object found in 2006, though I can't say that I've actually linked the orbits. Information about several objects with orbital periods of a month or so, such as 2010-050B (Chang'e 2 booster), 2013-070B (Chang'3 booster), and some others, is available here.

It’s a bit of a cheat, but a satellite at L4 or L5 is roughly 100 million miles from Earth, quite stable, and has a one year period to its motion around Earth. That’s seems to be the farthest stable & orbit-like setup.

Whether one considers L4 and L5 “orbiting the Earth” is a question for another day...

It all depends on how you define "earth orbiting", and if the spacecraft still needs to be functional.

STEREO-Behind got out to more than 2AU, and it's on its way back now. As it orbits the sun at slightly more than 1AU, it will go "around" the Earth. Unfortunately, we're currently out of communications with it, and they don't know if they'll be able to recover it. (Although the closer it gets to Earth, the easier it should be... assuming it's not rolling so fast that communications would be impossible, or if it's rolling such that the solar panels aren't getting any power)

STEREO-Ahead is less than 1AU from the sun, so doesn't "orbit" the Earth.

As shown in the graphic at https://space.stackexchange.com/a/58177/12508, the Wind spacecraft went through several periods of so called petal orbits (because the trace of the orbit looks like a flower petal) with apoapses up to ~200 Earth radii (~1,274,000 km). It also went through a series of prograde orbits sending it >320 Earth radii (>2,038,400 km) along the $\pm$Y-GSE direction relative to Earth. These are all ignoring the periods when Wind was orbiting either L1 or L2. Though this wouldn't change much as the prograde orbits took Wind further from Earth than either of these Lagrange points.

11
Can a satellite work like a radiometer?
20
Has the Earth's red atmosphere rim ever been photographed?
15
What is a near rectilinear halo orbit?
9
TESS orbit and moon resonance
6
What could a High Earth Orbit be used for in practice?
12
What ever happened to 6Q0B44E - potentially the "artificial satellite (with) the farthest orbit around the Earth"?
5
Where is the Wind going? Where has it been? (Global Geospace Science spacecraft 1994-071A)
4
Apollo 11 mission report shows velocity well below escape velocity thousands of km on the way to the Moon
4
What is the largest antenna deployed in space?
11
Why is a near rectilinear halo orbit proposed for LOP-G (formerly known as Deep Space Gateway?)
See more linked questions